September 7, 2017 by NSC in Projects and Features, This month's featured stories 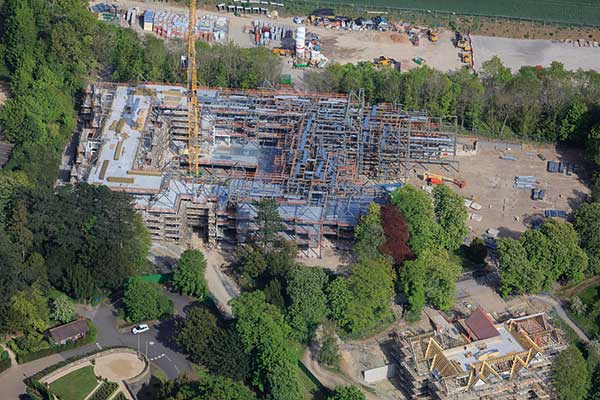 One of the country’s leading providers is BUPA-owned client Richmond Care Villages, who are currently providing a retirement village at Wood Norton near Evesham, Worcestershire.

The £40M development, being built by BAM Construction, will create 61 village apartments for independent living, 46 suites for assisted living, and a 60-bed care home providing nursing and dementia care.

In addition, there will be a wellness spa, lounges, library, terrace café, restaurant and garden bar.

The project is located adjacent to an exclusive hotel and BBC technical and training facility. The retirement village’s footprint was previously occupied by a BBC-owned training and conference centre, which was demolished as part of the project’s early works.

Work initially included the team removing roof tiles and felt from pitched roofs to prevent bats from roosting, and then stripping out asbestos from the existing buildings prior to demolition. The team then undertook groundworks that consisted of 26,000m³ of overburden being removed from site. 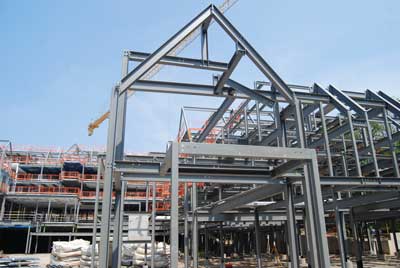 Steelwork was chosen for its speed of construction 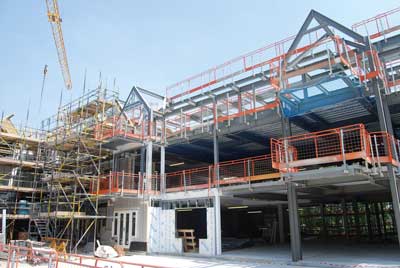 Room sizes and uses change for each floor 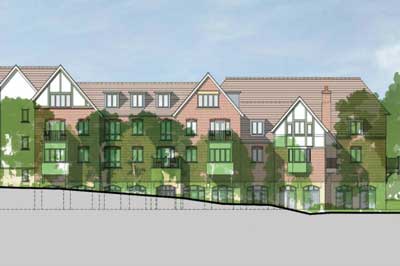 Most of the accommodation is within one large building, with the exception of 13 individual apartments which are housed within a separate three-storey steel-framed building.

The footprint for the main building has a serious slope, with an 8m difference from the top end to the bottom end. Two 5m-high retaining walls were installed to form two steps for the building.

The walls split the building roughly into thirds, with the top portion consisting of four levels (0, 2, 3 and 4) and the bottom third also consisting of four floors, but these are at -2, -1, 0 and level 2. Incidentally floor 1 only exists in the middle portion, which also includes -1, 2 and 3. The entrance to the village is at the top end and at level 0.

Having such a complicated floor set-up had a huge impact on the initial design of the project as BAM Construction Project Manager Paul Hayfield explains: “The design intent was originally for a load-bearing masonry frame, but we changed it to a steel frame as masonry would have been impractical for this form of construction. The steel frame construction has certainly given us a programme betterment.”

Consequently 1,080t of structural steelwork, fabricated, supplied and erected by Adstone Construction was used, along with 14,347m² of metal decking supplied and installed by Structural Metal Decks (SMD).

As well as a sloping site and the subsequent floor level changes, most of the building’s floors have different uses, which adds to the complicated design, as room sizes and column locations change for each floor.

“The design has to incorporate numerous transfer beams to accommodate column line changes and this is much easier to do with a steel frame,” says Rodgers Leask Project Engineer Craig Wynne.

With different room sizes and facilities on most floors the retirement village also requires numerous services, such as heating and power, which have had to be integrated within the structural floor zone.

BAM Design says its expertise in 3D co-ordinated design, and working with steelwork contractor Adstone Construction as well as the structural engineer and M&E subcontractor in a collaborative manner, was fundamental to the integration of over 400 services holes through the steel frame.

“We have fabricated and installed a series of universal beams, each with individual holes formed within them to accommodate the services,” says Adstone Construction Contracts Director Gary Howson. “It was important to have the services within the beam’s depth as this kept the building height down.”

The beams spanning the corridors have to accommodate the most services. In order to create enough space, the design team had to change the support level for the metal decking in some locations.

With a total steel tonnage of just over 1,000t, the project has required an unusually large number of individual steel members.

With little repetition, as very few columns reach the full height of the building, the frame also has to incorporate step changes to the layout. Adstone estimates that the project has required 50% more steel members than would ordinarily be needed for a scheme of this size.

During the steel erection programme Adstone delivered 47 loads of steel, with some loads consisting of up to 270 individual members.

“There are a lot of small pieces due to the complex nature of the structure and the requirements of the frame with every connection being bolted. We’ve calculated there are approximately 53,000 bolts on this complex job,” adds Mr Howson.

Because most of the steel frame consists of small light pieces, Adstone was able to use a 40t-capacity mobile crane for the steel erection. The only exception being some large 10t beams spanning the pool, which required a large crane to be brought to site.

The large piece-count of steel also made the erection process quite complicated.

“We couldn’t just erect the building sequentially from one end to the other, as the column lines change so frequently and many parts of the building are reliant on adjacent areas for their stability,” says BAM Construction Senior Site Manager Alan Whyte. “Consequently, the erection sequence had to jump around a bit, which made it more challenging when organising where the follow-on trades could begin their work.”

Completion of the retirement village is scheduled for September 2018.

David Brown of the SCI discusses this key requirement in many steel structures.

One of the significant features of the Richmond Wood Norton project is the relatively high level of services needed, which were integrated within the steelwork. Notably, the project utilised information from different disciplines in a three dimensional fully coordinated model, which allowed the necessary service openings to be located. The service openings range from relatively modest circular holes within the depth of the beam to larger rectangular openings with additional plate reinforcement above and below the opening.

A number of beam options are available to incorporate services. Cellular beams with regular openings are often used in highly serviced commercial buildings, especially if the requirements for services are uncertain at the design stage. Alternatives such as notched beams, and tapered beams fabricated from plate may be considered if the services are located close to the column lines. The modelling successfully used in the Richmond Wood Norton project allowed the precise locations and required opening sizes to be identified, and individual openings formed in the fabrication workshop.

General guidance on structure services integration is provided in reference 1, which has helpful information for the structural engineer and the services engineer on both disciplines. For the structural engineer, general guidance is provided about openings in webs which will enable an early assessment of the design issues. Recommendations covering the sizes of unstiffened and stiffened web openings are given in references 1 and 2. Unstiffened openings should not generally be deeper than 0.6h (where h is the beam depth), nor longer than 1.5h. The shear resistance and instability of the web should be checked, and guidance is provided about the location of openings, avoiding point loads and supports. Design guidance for large web openings in composite beams is provided in reference 3. Steel designers may find the information in reference 1 covering typical service sizes (and thus opening sizes) and service layouts helpful at the concept design stage.

Fire protection demands special attention, particularly if the fire partitions must be aligned with the steel members with web openings. It may be appropriate to offset fire and smoke damping arrangements from any fire partition, rather than develop a detail incorporated in the steel beam.

The Richmond Wood Norton project demonstrates that with the adoption of a coordinated building model, service integration can be readily achieved.

References (all available on Steelbiz)