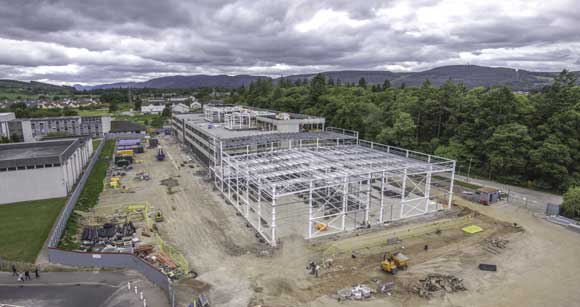 The steel structure will also house changing rooms, a dance studio and a gymnasium, with the majority of these facilities also open to the local community once the project is completed.

“Steelwork was chosen for this part of the project because it provided the most economical way of forming the hall’s 19m-long spans,” says Morrison Construction Senior Project Manager Finlay Black.

Separating the halls is a 2m wide zone that will accommodate storage areas and a plant zone. Either side of this area and around the two hall’s perimeters, the columns, supporting the two rows of roof rafters, are spaced at 3.5m centres.

The sports halls adjoin the main concrete teaching block of the school and there will be direct access between the two, however the steel-framed sports building is an independent structure.

“There is an 18mm cavity between the two structures’ columns,” says Mr Black. “This won’t be visible once the cladding is installed and the two will then look like one building.”

The part of the steel frame that is closest to the teaching block accommodates a mezzanine level. The ground floor has interconnecting doors between the sports area and the teaching block, as well as changing rooms. Above on the first floor there will be a gym and a dance studio.

Steelwork for the project was fabricated, supplied and erected by BHC. Once the steelwork was delivered to site, the company used a variety of MEWPs and one mobile crane for the erection programme. 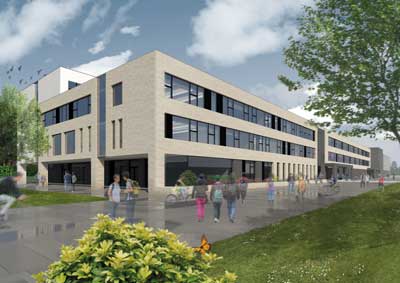 How the completed Academy will look

The steel erection programme started later than the main concrete works as it is quicker material to erect. In order to allow the concrete works on the main teaching block to be completed unhindered, BHC started erecting the steel frame from the furthest point and then worked its way towards the school building.

“We had to erect the steel in this direction so as to avoid the temporary works the concrete team had assembled,” explains BHC Contract Manager Eddie Brown.

Prior to steelwork erection beginning, Morrison Construction had already cast the sports hall’s concrete slab. This allowed BHC to erect the frame from inside its footprint with the MEWPs working off of a smooth and even surface.

The new Inverness Royal Academy will have a pupil capacity of 1,420 pupils; up from 1,153 at its current building, in order accommodate housing growth within the catchment area.

Construction work on the new build is scheduled for completion by next summer, after which the school will decamp into its new facilities in time for the 2016 autumn term.

Morrison Construction will then begin demolishing the old school buildings and turn the area into a new school car park and sports pitches.

Plan of the site with the steel structure highlighted in pink