Leisure gets a boost 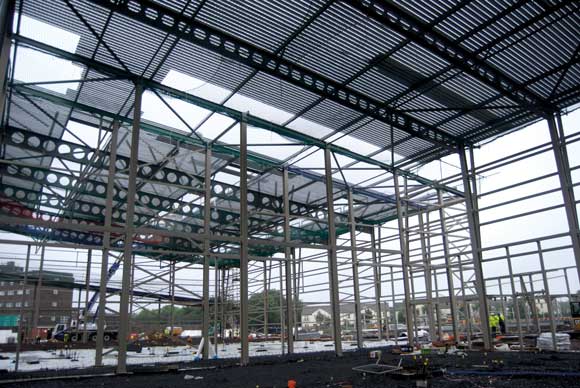 According to figures from the Northern Ireland Statistics and Research Agency, the total volume of construction output in the fourth quarter of 2016 increased by 6.9%, which was 12.8% higher than the same period in 2015.

The outlook for this year and next is expected to remain at a similar level, which is good news for the construction industry in general.

One area which is seeing a lot of activity is the building of new leisure centres, as numerous existing facilities across the province come to the end of their useful lives.

An example of this is a new £30M leisure centre in Newtownards, County Down. Replacing an existing 1970s-built facility in the town, the new centre, which is due to complete at the end of 2018, is being built on land previously occupied by the Council-owned Dairy Hall Playing Fields and a small engineering works.

It will also have an outdoor covered sports pitch, outdoor adventure play area, wheel park provision and a bike track.

The scheme has adopted a hybrid design, with structural steelwork being used for large parts of the leisure centre especially those areas with long spans, in conjunction with in-situ concrete and some glulam beams and columns.

“Leisure centres are usually complex structures as they have to accommodate numerous facilities under one roof,” says WYG Director Stephen Alford. “This project is no different, and so we’ve had to use different materials to achieve the finish and build the client required.”

The main steel element of the scheme is the sports hall which is formed with a series of 20m-long cellular beams. The cellular beams have been used for their efficiency and to allow ductwork and other services to be accommodated easily within the steelwork’s depth.

The main entrance will be located adjacent to the aquatics zone

The two spaces form one half of the much larger leisure centre main building. They are attached to the aquatics zone which has an in-situ concrete substructure.

“Because the ground conditions are quite poor, we decided that the best solution was to avoid excavation, so we’ve built the concrete substructure at ground floor level, with the swimming pools then accessed from the first floor,” explains Heron Bros Contracts Manager Stephen Nevin.

Spanning the main pool are a series of long span glulam beams, supported at one end on glulam columns, positioned along the aquatics zone’s perimeter, and steel columns on the other end.

The steel columns then form the internal wall of a two-storey structure that runs along one elevation adjacent to the pool hall. This structure accommodates changing rooms and terrace seating on the lower level, and a fitness suite on the upper floor.

“Steelwork works best for this two-storey part, as the columns are behind blockwork walls they won’t be exposed to the corrosive pool environment. Meanwhile, the fitness suite is an open plan column-free space, something which is best achieved using steel,” says Mr Alford.

Collaboration and coordination between the various trades is essential on this project as Walter Watson’s Project Manager Trevor Irvine explains: “Temporary propping was initially installed along with the glulam columns. Once the roof was completed we then removed the props and installed the steel bracings having previously designed steel to timber connections between ourselves and the glulam installer.”

Summing up, Stephen Reid, Ards and North Down Borough Council Chief Executive, says: “This is an exciting and much anticipated development for the Borough. The new leisure centre represents a very significant investment in high-quality sport and leisure facilities for people of all ages and will contribute much to our overall objective of promoting the health and wellbeing of residents.

“The features that will be included have been shaped by consultation with user groups and will complement the facilities available at Bangor Aurora Aquatic and Leisure Complex, Londonderry Park and across the wider Borough.”

Attached to the sports hall via a steel-framed link, a lightweight steel structure (1), housing three synthetic pitches, suitable for a range of activities including five-a-side football, tennis, hockey, tag rugby and cricket, will ensure that play is unaffected by bad weather

The steel-framed structure is made from high-tensile steel, which is hot-dip galvanized to offer protection against corrosion. The steelwork forms a dome which is covered with a tensile membrane roofing.