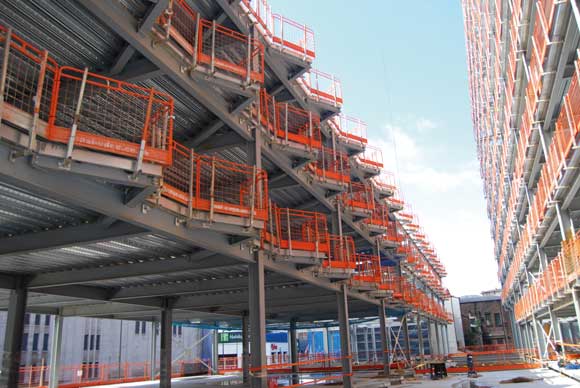 A podium separates the hotel from the taller student accommodation block

One of these projects is the £39M Lime Street regeneration development, located next to the city’s main railway station.

Here on a prominent but constrained site, a large structural steel frame has recently been completed by Billington Structures working on behalf of main contractor ISG.

The entire scheme has been designed as one large steel frame, albeit with three separate parts; a lower retail podium that supports both a three-storey Premier Inn hotel with 101 guest rooms and an 11-storey, 412-room student accommodation block.

Interestingly, the project forms one of the initial elements of Liverpool’s ambitious Knowledge Quarter development. Covering a large area and extending from Lime Street station north eastwards towards John Moores University, the development will consist of a number of new educational, technology, innovation and creative facilities.

Work on the Lime Street project began last year with a large demolition programme. This involved the removal of an entire block of buildings that previously occupied the island site, which is bounded by Lime Street, Skelhorne Street, Bolton Street and Copperas Street. 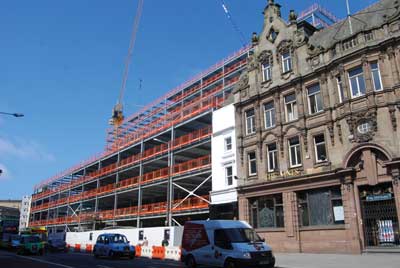 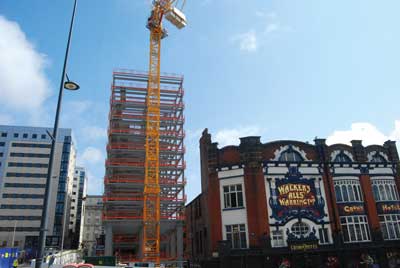 Once the site was cleared the steel erection programme was able to begin last April. No piling was necessary as the columns are supported on fixed bases that are on ground beams positioned directly on top of sandstone.

The decision as to which framing material to use was made during the early design stages. Both concrete and steelwork options were thoroughly assessed before the latter was chosen.

“Structural steelwork was the only viable option because of its speed of construction and ultimately cost,” says ISG Senior Project Manager Shaun Boylan. “The entire steel frame was up within the 14-week programme, which was good for the project as it meant all of the follow-on trades were able to get an earlier start.”

Two listed pubs, positioned either end of the Lime Street block, have been retained. Although the Crown Hotel and the Vines are not connected to the scheme, they bookend the development along with several other non-listed, existing commercial and retail buildings.

In places the new steel frame comes within 12mm of a party wall, making the erection process a little more challenging, but ultimately achievable.

“All neighbouring properties are open for business throughout the construction programme, and not interfering with their operations is one of our main project goals,” adds Mr Boylan.

Using steelwork has allowed the team to erect the steelwork close to the two pubs by working from inside the frame’s footprint, where no machinery or steelwork needs to over-slew either of the hostelries.

The majority of steelwork is based around a regular 7.3m grid pattern, chosen for its suitability for the project’s many end-users.

None of the project’s steelwork elements were particularly heavy, some 5.5t columns positioned in the retail zone being the heaviest members. Consequently, the steel was erected using a 90t-capacity mobile crane as well as the on-site tower crane.

Following on behind Billington’s steel erection, SMD has installed more than 17,700m² of metal decking for the composite floors.

At ground floor level, the steel frame accommodates a series of retail units that have frontages along Lime Street. Because of the site’s slope –  a 5m difference from front to back of the site – this lowest floor is actually below ground level along the Bolton Street elevation, where a large retaining wall needed to be constructed.

To get maximum flexibility and allow future tenants the opportunity to combine retail units, cross bracing has not been used for stability. Instead the entire project is a hybrid design using a combination of sway and moment frames.

“Bracing spanning between columns would have got in the way of future shop expansions, so instead we’ve designed the frame with rigid bolted connections,” explains Sutcliffe Project Engineer Sean Keyes.

“This means we have larger columns and beams in the ground floor retail area than we would have ordinarily specified.”

The three-storey Premier Inn is positioned above the retail units along Lime Street. As a nod to the demolished buildings, this elevation of the scheme will feature a perforated aluminium artwork cladding by local artist Anthony Brown, depicting the history of Lime Street [see box].

With the exception of the Premier Inn’s lowest level, which contains the entrance and a restaurant, a regular grid pattern has been used throughout. The pattern comfortably accommodates a central corridor with regular sized rooms positioned either side.

To create the slightly larger spaces needed for the hotel’s first floor, a series of transfer structures have been installed to the underside of the second floor.

Likewise, the student accommodation block has been built around a repetitive column grid pattern that creates the desired space for its internal layout. This consists of two cores positioned at either end of the block that serve a double row of central corridors that in turn give access to a series of bedroom pods which are clustered around their individual common rooms.

The only part of the student accommodation block that varies in design are two bays positioned adjacent to the podium’s central realm that separates the two buildings. This zone incorporates a double-height space for a reception area.

Liverpool’s Lime Street development is due to be complete by Summer 2018. 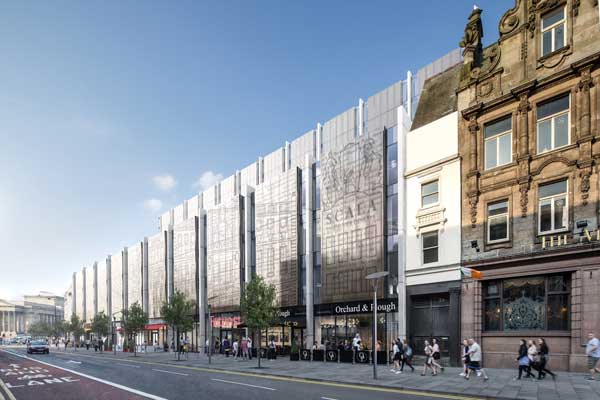 Mr Brown says the work’s intention is to capture and reflect the history while commemorating the development of a truly unique street –  and one of the most important areas in the city of Liverpool.

He adds: ‘We have created an accessible ‘Quantum Timeline’ using illustrative graphic images and archived text to immortalise the development, buildings, business, people and heritage of Lime Street which was formerly known as Limekiln Lane.

A total of 11 aluminium panels tell the story, including depictions of the two cinemas that once stood on the street; Maggie May, the heroine of a famous Liverpool folk song; the Guinness Clock, one of the city’s most remembered buildings; and Marks and Spencer, who had one of its earliest stores on Lime Street.