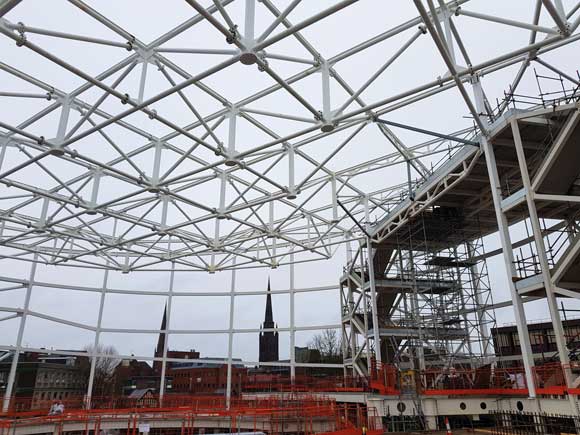 A total of 14 trusses create the roof

Coventry’s city centre Water Park project has overcome a number of obstacles including a confined site and a challenging steelwork design.

The building will be dramatically lit at night and sits next to Coventry’s ambitious City Centre South project which will transform the retail offering during the coming years.

With the exception of the area adjacent to the spire, the project footprint is almost entirely bounded by busy roads and consequently the facility has been designed to fully occupy the constrained city centre site, which has resulted in the building’s distinctive shape. The upper parts of the centre are housed in a circular drum-shaped structure, while lower down the ground and first floors are accommodated within a more rectangular shaped plinth.

With very little room for materials storage or plant equipment, the site is served by two entrances and a roadside laydown area. With no on-site tower crane, all lifting duties are being performed by a variety of mobile cranes, brought to site individually when needed.

Billington Structures used mobile cranes up to and including a 250t-capacity unit for the steel erection. With so little room to manoeuvre, the company erected the entire frame by working in a circular manner, infilling wedges and ending up putting in the last steelwork adjacent to where it had begun. 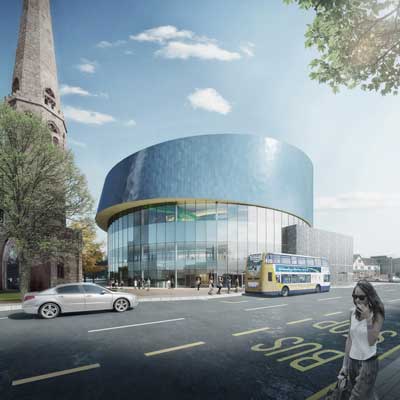 The project will provide a new city landmark for Coventry 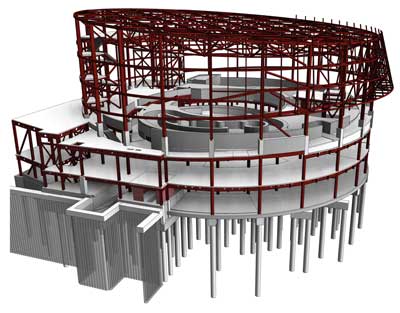 Moving up the structure into the cylindrical part, the second storey is in fact two floors with one lower level providing the base for the wave pool, lazy river and associated balance tanks. The main level two is then the pool surround where many of the rides culminate, and from where visitors ascend twin staircases leading upwards to the top of the steel-framed ride tower, which is where the six rides begin.

Apart from a facetted curved perimeter, the lower floor levels are formed with a steel frame containing exposed bespoke plate girder beams with cellular holes. The deep cellular beams provide the necessary stiffness to support pool tanks and control the dynamic response of the gym, while the holes have been principally designed to accommodate the many services required for the building.

“The connection nodes to the steel frame beneath the pool hall are working particularly hard as they support the high vertical load from the pools, and are also designed as stiff moment connections in two directions to control deflection and prevent cracking of the pool tanks,” says engenuiti Associate Ian Hamilton.

The cylindrical drum rises to a height of 19m to give the building its overall 28m height. This upper part houses a large column-free zone, with a massive span of 52m formed by a rooftop diagrid of inclined steel tubular trusses.

This open area will house the slides, with the largest standing 14.6m high and the other measuring in the region of 11.5m. All of these water slides will be hung from the roof trusses, meaning the steelwork is not just spanning a large area it is also picking up considerable extra loadings.

“When designing the roof steelwork, we had to take into account the ride’s self-weight, water loadings as well as dynamic loads from riders. The rides are hung from downstand columns located at the diagrid nodes. These forces are generally resolved by a push/pull action in both directions of the diagrid,” adds Mr Hamilton.

Adding some extra complexity into the design, the roof of the drum is not flat, as it slopes downwards towards Christchurch spire. The trusses consequently taper from a maximum depth of 4m.

To form the rooftop diagrid Billington Structures has installed a total of 14 trusses, seven spanning in one direction and the others spanning at an adjusted angle of 90 degrees.

In order to erect the diagrid most of the trusses were installed piece small along with the main supporting steelwork. The supporting columns consist of 24 × 18m-high 500mm × 300mm RHS columns that are spaced regularly around the drum perimeter. A compression truss that runs around the rooftop perimeter of the drum then connects the columns to the diagrid members.

Only when there were enough supporting columns in place could a truss be installed, and so they were erected progressively as the erection team worked its way around the drum circle.

None of the sections spanning the central part of drum were erected as complete trusses as they would have been too long, consequently these trusses were brought to site in erectable pieces, with the longest section measuring 28.5m-long.

A small amount of temporary steel was also utilised to support the diagrid until it was complete and fully self-supporting.

Connection design has also been a challenging aspect of the steelwork package. Some parts of the diagrid require nodes that have to accept up to five bolted beam connections and, at a later date, the rides themselves.

“For this to be successful we have had to obtain full support from all relevant sub-contractors and suppliers. The daily briefings and workshops between Buckingham Group and our supply chain partners creates a working environment where priority is given to the necessary orders, with all parties supporting the importance of maintaining this strategy and understanding how it benefits everyone,” sums up Buckingham Group Project Director Colin Roddy. 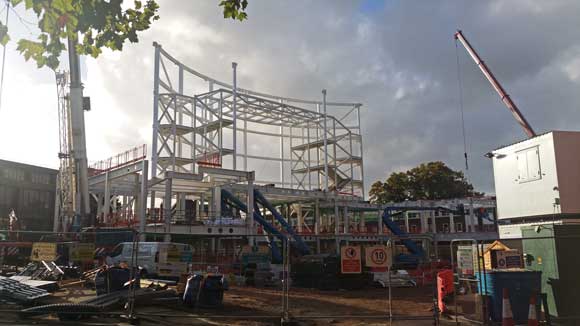