All change at Wakefield 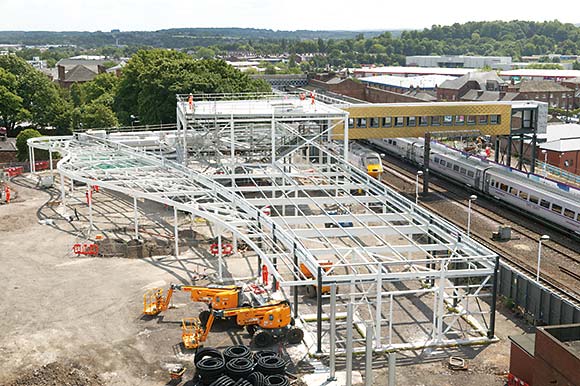 The delivery of new station facilities at Wakefield Westgate station is reliant on steelwork’s speed of construction.

Widespread changes are afoot in Wakefield as the city continues to regenerate large parts of its commercial centre.

Recent developments have included a number of steel framed projects such as a new covered market (NSC April 2008) and the large Trinity Walk shopping mall (NSC June 2010). Currently under construction is a new Westgate station, one of the city’s two railway stations.

The £8M redevelopment of Wakefield Westgate is being built on a new site to the north of existing station buildings. It forms part of the much larger Merchant Gate scheme, which recently delivered a new 900 space steel framed multi storey car park for rail users.

One of the main components of this sustainable design blueprint is steel. The main station building – which will house a large open foyer, retail outlets, coffee shop and a first class lounge – a pedestrian footbridge and associated lift shaft and staircases have all been built using structural steelwork.

“The long spans required for the retail areas and the foyer, as well as the speed of construction meant the project was ideal for steel,” says Anthony Hall CJCT Project Architect. 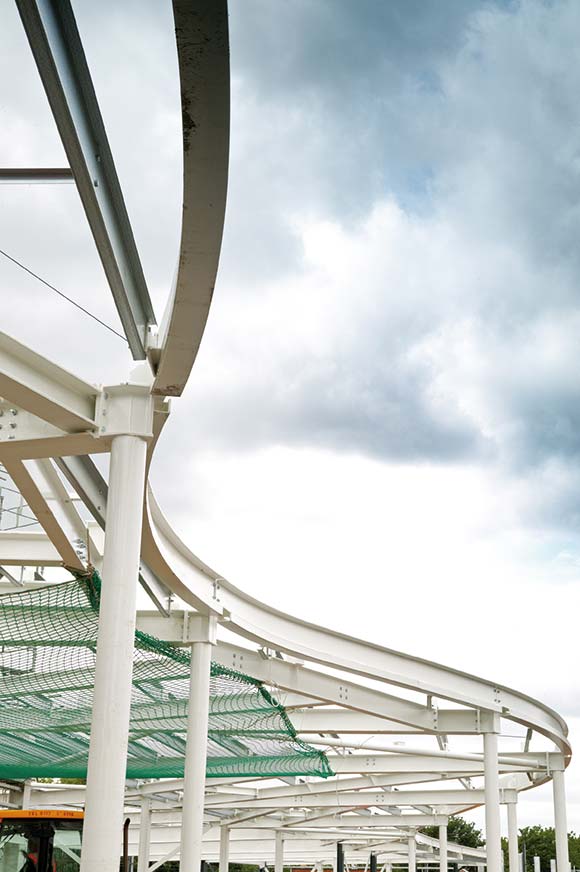 Billington Structures erected all of the steelwork during a four week programme. Prefabrication helped speed up the work, but also meant the steelwork programme had to be phased, in order to accommodate erection of these elements.

“We erected half of the main station building, then installed the footbridge, and then returned to completing the building,” explains Alan Dutton, Billington Structures Project Manager. “If we hadn’t scheduled our programme in this manner we wouldn’t have had enough room to position the large crane needed to lift in the bridge structure.”

Site access for large vehicles and deliveries is limited to one side of the rail tracks, where the new buildings are being erected. A laydown area is located where the new taxi rank and drop off point will be positioned.

The footbridge, the lift shaft and its associated lobby (shelter) were also delivered to site as prefabricated units. They were both lifted into place during an overnight rail possession that took place a week after the bridge was installed (see box).

The lift shaft weighed 9t and for ease of transportation it had to be delivered to site by truck in a horizontal position. This meant two cranes were needed for the installation, one to lift the shaft into an upright position and another to then lift it across the tracks to its final location.

Two prefabricated staircases have also been delivered to site and installed either end of the footbridge. One 9t staircase has been installed within the new station foyer, while on the other side of the tracks a larger 23t staircase provides access to the station and bridge.

One of the main architectural features of the station building are the long uninterrupted spans in the retail areas and in the foyer. The steel frame has been erected around 7m × 15m grid pattern, which allows plenty of column free internal space.

The station building is a single-storey structure, with a large double height space in the centre to accommodate access to the footbridge.

“Creating this part of the project in anything other than steel would have been difficult,” says Simon Walker, Amey Project Engineer. “Curved steel sections were simply brought to site and bolted into place.”

Summing up Peter Box CBE, Wakefield Council Leader says: “The new Wakefield Westgate Station is fantastic news for the district. The rail station has always been an integral part of the master plan for the redevelopment of the area. It will be a key gateway into the city, providing improved transport facilities for residents and visitors.” 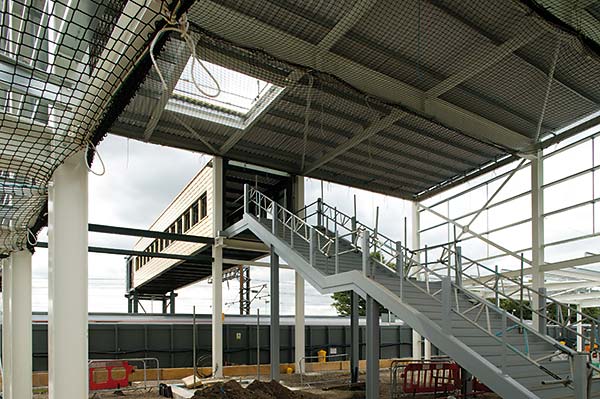 Connecting the station’s two platforms, the new footbridge was fabricated in two 14m long sections by Billington Structures. The sections were then transported to the cladding contractor’s facility, where they were clad with a distinctive bronze sheeting, before being spliced together and trial erected.

Once main contractor Buckingham had signed off the erection procedure and the bridge structure, it was dismantled back into two sections again and delivered to site.

On site it was spliced together again and lifted into place by a 500t capacity mobile crane. Such a large crane was needed to provide the necessary lifting radius as the structure had to be jibbed over the rail lines. The lifting was completed in one overnight weekend rail possession.