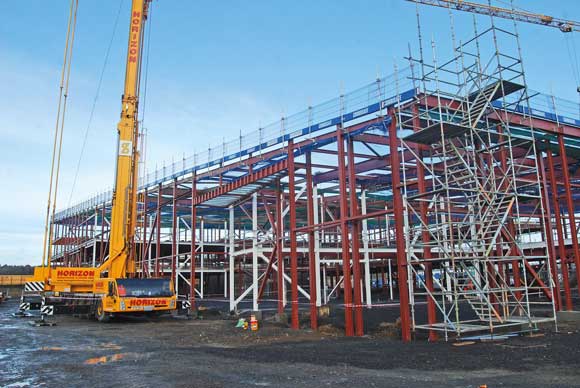 One of the two main sloping elevations

Structural steelwork has answered all the questions correctly on a school project in Perth. Martin Cooper reports.

Spearheaded by Springfield Properties, which secured planning consent for its master plan in 2016, the construction of the site’s proposed 3,000 homes will continue for the next 30 years.

One of the initial parts of the village to be built is the £31M Bertha Park High School, a facility that will cater for up to 1,100 secondary pupils. It is hoped that by building the school in the early stages of the development, it will encourage families to move to the new village.

“The project is unique in the current Scottish schools programme as it isn’t a replacement for an existing school, rather it is an entirely new building to serve the growing population of Perth,” explains Robertson Operations Manager Robbie Kerr.

Having a blank canvas with no old school to replicate in any way, as well as building on a greenfield site, has allowed the design team to produce a highly distinctive school building.

The school is accommodated within one large wedge-shaped structure that measures 70m-long and is 40m-wide at the northern end. Both of the main elevations taper inwards and so the southern end is slightly narrower at 20m-wide.

Topping the building is a sloping roof with a five degree pitch, which slopes downwards from the north facing main façade. This means the structure has three floors with a large enclosed plant deck above at one end, sloping down to only two floors at the southern elevation. The uppermost third floor consequently only extends over five bays at the north end.

This 40m-wide north façade contains the school’s main entrance and, similar to the slightly narrower southern elevation, will feature large glazed areas in contrast to the two side elevations of the school that will be clad with brick.

“It’s a very efficient shape, suited to a steel-framed design,” explains NORR Director Kevin Cooper. “The teaching spaces are located around the exterior of the structure with a large column-free centrally positioned amphitheatre acting as the school’s main focal point.” 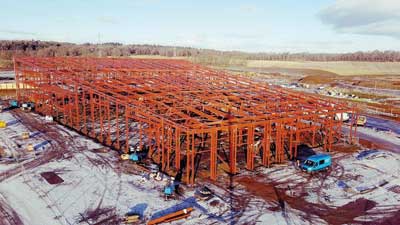 The steel frame is based around a nominally standard grid for its classrooms of 7.5m × 7.5m, although there are some slightly larger teaching spaces with a grid of 7.5m × 9m.

Steelwork supports metal decking throughout creating a composite design. Stability for the steelwork is derived entirely from braced bays, located throughout the structure, but mostly in partition walls.

The ground floor of the project contains the aforementioned classrooms around much of the perimeter, with the western elevation also accommodating a sports hall, a smaller games hall and a gym. The sports hall is a double-height braced box with spans of 20m.

The middle of the ground floor features the amphitheatre, breakout spaces and dining areas, all of which form the central open-plan spine of the school. These zones are spanned by bridges, giving access across the void, and are topped with a roof featuring rooflights allowing plenty of natural daylight to penetrate the building’s interior.

The northern end of the amphitheatre features an audience terrace, formed by steel rakers supporting precast planks. Behind the terracing the school’s three-storey part extends for five bays.

According to the design team, the intention is that the school provides well-designed spaces, both internally and externally, that produce and encourage opportunities for positive social interaction for all age groups, both within the formal school setting and in the public environment.

The design addresses the access needs of disabled children and adults, pupils, staff, and visitors. The new school is said to be a ‘barrier-free’ environment, providing full access for the integration of students and other users who have special needs.

This requirement goes beyond simply providing access and toilets for wheelchair users, but will address for example, the needs of the hearing and visually impaired, and the provision of accommodation for teaching areas appropriately sized to accommodate students with special mobility and equipment needs.

Steelwork contractor Walter Watson completed the steel frame erection in January, but remained on-site for a few further weeks to complete the other parts of its package. These included the installation of precast elements – stairs and terracing – and the installation of metal decking.

Using a variety of mobile cranes, the steel programme was completed ahead of schedule despite some typically inclement winter weather.

“There were a number of factors as to why this job was always going to be a steel project; speed of construction was one but also the location was important. We are located on a greenfield site with little or no paved access roads as yet, but steel has been transported to site in erectable loads. We would have struggled with any other material,” explains Mr Kerr.

Prior to the steel erection programme kicking off, Robertson had been on-site since August 2017. Early works included some earthmoving to level the previously sloping land and the installation of pad foundations.

As well as the main school building, the project also includes the construction of a steel-framed energy centre, which features a five degree slope as a nod to the school structure, car parking, and sports pitches including a 3G all-weather pitch.

Bertha Park High School is due to open for the Autumn term in 2019.