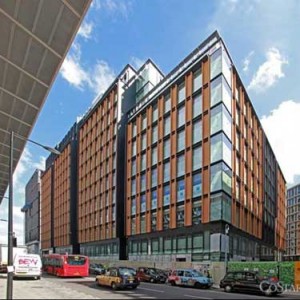 The 11-storey high 6 Pancras Square building has been completed by Vinci Construction, adding another steel framed piece to the ongoing regeneration of the former industrial zone north of King’s Cross Station.

“A steel option was the only realistic choice for this project as the client wanted a City spec office building with long clear open spans,” said AKTII Project Director Steve Toon.

Erected by Severfield, the building is formed with a total of 2,900t of steelwork.

Using Fabsec cellular beams has allowed the project team to integrate all of the services within a constant and efficient structural zone created by the consistent depth of the beams.

Pancras Square will eventually consist of nine retail and commercial buildings arranged around a wedge shaped podium and public realm.

It is part of one of the largest regeneration schemes currently taking place in Europe. Described as a new piece of London with a brand new postcode, London N1C (as it will be known) will eventually include 50 new buildings, 2,000 new homes, 20 new streets and 10 new public squares spread over 67 acres.