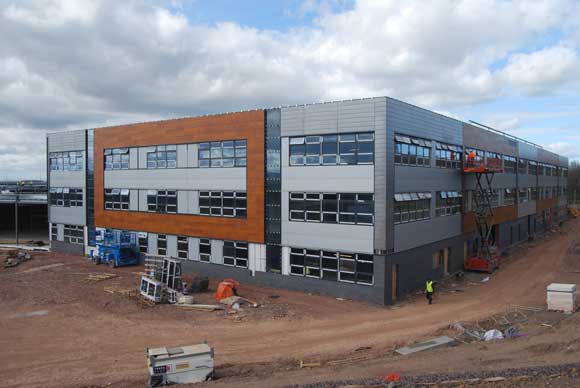 The high school portion of the project

The steel-framed building is 15,714m², and it will accommodate a new library, gym, swimming pool, sports facilities (including all weather pitch) as well as a high school containing further community facilities.

The building is being delivered by Midlothian Council’s development partner, Hub South East, and its appointed contractor Morrison Construction.

Designed by Cooper Cromar, the £34M project is expected to open in 2018 and will accommodate up to 1,200 pupils.

The Newbattle Centre has three distinct parts, a triple-span structure housing the sports facilities, the teaching block, which is three-storeys high and, joining these two parts together, a single storey link structure that accommodates a library, café and the main entrance/reception.

The sports accommodation was always going to be a steel-framed structure, with its requirement for long clear spans. However, the decision to use a steel framing solution for the teaching block was not so clear cut.

“The client wanted a 3.5m-high floor-to-ceiling height with a clear and exposed soffit, something that had been achieved at one of its previous schools. That project had used a concrete frame, but on this project we suggested a steel solution, which would be more cost-effective and as quick to build,” says Morrison’s Construction Manager Jeff Thornton. 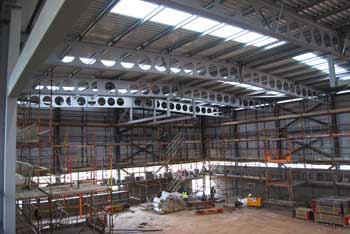 A frame analysis was conducted whereby it was proven that the steel option could deliver everything the client wanted.

The design incorporates steelwork supporting precast planks from the bottom flange with the aid of welded on plates.

“During the fabrication process all the teaching block’s beams had plates welded on to them as landing points for the slabs,” explains Hescott Engineering Director Alan Scott.

In its finished state the steelwork has been moved into the depth of the floor, while the underside of the precast slabs and the beams are painted white, all of which creates a seamless clear exposed soffit in the classrooms.

The teaching block has two rows of classrooms, on every floor, positioned along both main elevations. Circulation routes overlook a large open full height atrium that is located in the middle of the building. The atrium is topped with roof lights that will allow natural light into the structure’s inner areas.

The ground floor of the atrium accommodates the school’s dining hall and assembly hall, a facility that can also double-up as a public theatre space. A wide feature staircase, with terraced seating areas along one side, leads from this zone up to the building’s first floor level.

Structurally, the teaching block is predominantly built around a regular 8m grid. Stability is derived from vertical bracings, which are mostly located in stair cores.

Adjoining one end of the teaching block is the single storey link building. This long-span area houses the main entrance, a library and a café, all of which will be open to the local community.

As the name suggests, the link building offers access and joins the two parts of the Centre. As the entire steel frame of the project is so large, more than 100m long, the link is structurally separated from the sports zone by a movement joint.

The sports zone is divided into three braced long span areas, each topped with a shallow dual-pitched roof. For economy reasons, Westok cellular beams have been used to form each of the three roofs.

Explaining the reason for designing braced frames instead of portal frames for the halls, Arup Senior Engineer for Building Structures Gary Stephen says the decision was based on aesthetics.

“Portal frames, with their deeper columns, work perfectly well in distribution centres or industrial buildings where it doesn’t really matter if columns protrude into the structure.

“But in our sport facilities we wanted the steel columns to be as narrow as possible to give us smooth walls and this meant we had to have braced frames.”

The bracing is located in the roofs, which are braced in two directions, and this then diverts the loads to further vertical bracing positioned in perimeter and division walls.

Of the three sports halls, the middle one housing a fitness suite and changing rooms is the widest with a span of 33m. This hall accommodates a mezzanine level, formed compositely with metal decking. This extra floor will have a large glazed façade giving people using the facility’s exercise machines views over the surrounding countryside.

Either side of this hall are two slightly smaller areas. A multi-sports hall with a 26m-wide span, and an 18m-wide hall housing the Centre’s 25m-long six-lane swimming pool.

Summing up Mr Thornton says: “This is an exciting new development for the communities of Mayfield, Easthouses, Newtongrange and Gorebridge, and Morrison Construction is delighted to be a part of it. 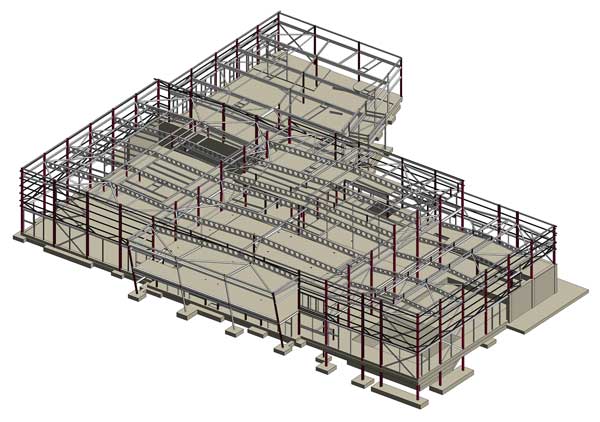 The town of Easthouses is situated in the middle of what was once a thriving coal mining region. The local colliery opened in 1909 and reached its peak, with a workforce of more than 1,000 men, in 1965. Employment has diversified since the closure of the mine in 1969, with many of the town’s residents now commuting to Edinburgh.

This industrial legacy played a significant role in the preliminary works for The Newbattle Centre. Although the building is on a previously greenfield site, a number of mine workings needed to be grouted before construction could begin.

A cut and fill operation was then undertaken to level most of the site, prior to the piling and steelwork programmes kicking off.