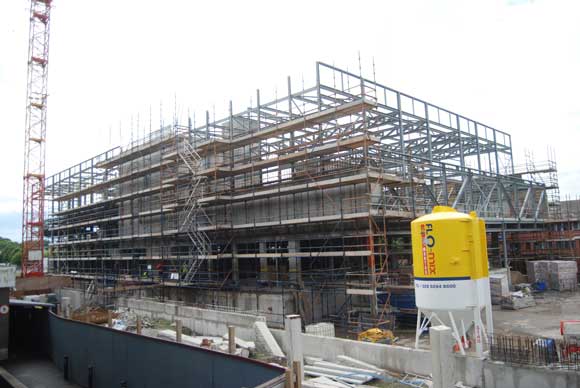 A civic gateway to the town of Downpatrick is being created by a leisure centre with a bespoke hybrid design. Martin Cooper reports.

Many of them will have noticed a large structure taking shape alongside one of the main routes into the town. This is Downpatrick’s new £14.5M leisure centre, which is said to be the biggest local government construction programme in the Down area.

The 6,000m² centre — which will feature a 25m, six lane swimming pool — will also include a learning pool with movable floor, four court sports hall, multi-purpose rooms and a spa area. There will also be a state-of-the-art fitness suite with over 80 stations.

Although the leisure centre is a functional structure, the location dictated that its design needed to create a building that was much more than that.

Kennedy FitzGerald Architects’ Project Manager Jonny Cassidy explains: “The centre is situated on the entrance to Downpatrick town centre and so it is viewed as a gateway project. As such it will have a number of high-quality finishes, including plenty of glazing, fibre cement panels and anodized aluminium, to create a standout building.” 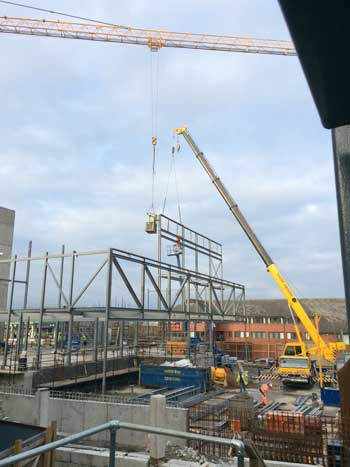 The entrance elevation truss is installed 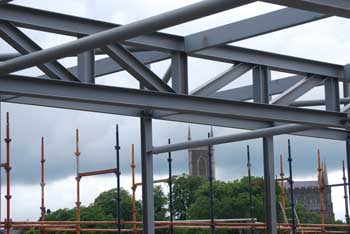 Gym users will have views of the nearby Cathedral

Internally, the centre is no less impressive as the design has to accommodate all of the required facilities within one three-storey building. A hybrid design has been adopted, with structural steelwork forming much of the building, with the notable exception of the swimming pool area – where a concrete sub-structure has been cast – and the main cores and lift shafts.

“The design incorporates a complex hybrid arrangement of structural steel and concrete, with each material complimenting and relying on the other,” says RPS Project Engineer Gavin Dougan.

Steel has been primarily chosen for the parts of the structure where long spans and column-free spaces are necessary, such as the sports hall and the fitness suite.

Steelwork has also been used for its speed of construction, an attribute which has proven to be very useful.

“In many areas, we have steelwork and concreting teams both working at the same time, with one following on right behind the other. In these areas steelwork has allowed us to get zones of the building up quickly in readiness for the follow-on trades,” says Felix O’Hare Project Manager Paul Maginn.

“In order to speed things up in the pool hall, we changed the main columns from concrete to steel as they were quicker to erect, even though we still had to encase them in concrete later in the programme to ensure they were protected from the corrosive atmosphere.”

Work on the leisure centre began in mid-2016. The building is being constructed in front of the current leisure centre, on land that was the facility’s car park. Once the new centre is up and running, the old leisure centre, which opened in 1980, will be demolished.

Temporary car parking, for the duration of the construction programme, has been provided at the rear of the current leisure centre. This is reached via a temporary road which Felix O’Hare put in during the very early stages of its work. When the current complex is demolished it will be replaced by a new car park boasting 150 spaces.

Because of the poor ground conditions Felix O’Hare’s early works included soil stabilization and the installation of 350 CFA piles.

Working in conjunction with the other trades, steelwork contractor Walter Watson began its erection programme with the main entrance and sports hall. This work was undertaken while the swimming pools were being cast at the other end of the building.

The sports hall sits at first floor level above a series of multi-purpose rooms and the main entrance. The hall’s open plan area is formed by a series of 18.2m-long × 1.1m-deep roof trusses, supported on top of two reinforced concrete walls.

Overhanging the entrance, the entire northern elevation features a 6m-wide cantilever. As this part of the first floor accommodates the sports hall’s store room, a lot of loadings are expected and consequently a large 20m-long truss supports the floor and forms this cantilevering elevation.

The final part of the steel erection progamme, which is being done during July and August, involves the most complex part of the scheme’s steelwork – three rooftop trusses, all working in conjunction with each other to support the roof of the third-floor fitness suite and a plant deck.

The fitness suite sits directly above the main swimming pool and its floor is formed by bridge beams spanning the aquatic zone.

Two primary trusses, measuring 18.5m-long × 2.2m-deep are positioned at either end of the fitness suite, helping to form the large column-free space. A series of 610UBs span the area between the trusses.

These two trusses, along with the roof beams are supported at one end by the main perimeter steelwork columns, and at the other end by another secondary truss.

Measuring 23m-long × 5.2m-deep and weighing 11.6t, the secondary truss supports the roof and the floor of the plant area, as well as picking up roof beams and trusses spanning the fitness suite.

“All of the project’s trusses have been fabricated in one piece and delivered to site on extendable trailers,” explains Walter Watson Project Manager Trevor Irvine. “We then erected them using either a 50t or 260t-capacity mobile crane.”

Down leisure centre is due to be completed by September 2018.