Packaging factory is all in the frame

Speed of delivery and ease of construction are just two of the reasons why a steel-framed solution was chosen for a manufacturing facility in Ireland.

The new steel-framed facility, located in Dundalk, has a floor area of approximately 6,500m² and will house 12 bespoke production suites within a large production area, separate goods-in and despatch zones, offices and will eventually employ 300 staff.

Commenting on the facility, Wasdell Group Managing Director Martin Tedham says: “We have always had a strong customer base in Ireland and we are certain that this trend will continue with the impending Brexit situation as companies, typically from the UK and USA, look to securing a base to service their European markets.

“We have always been a business that changes to accommodate the needs of the market and its customer base. Having a facility in Ireland and the European market makes sense and we are very excited about this new opportunity, as well as extending our geographical footprint.”

The project is being built on a 2.9-hectare greenfield site on the IDA Science & Technology Park on the southern outskirts of the Irish town. 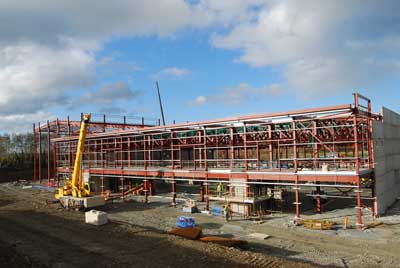 A plant mezzanine runs the entire length of the rear elevation 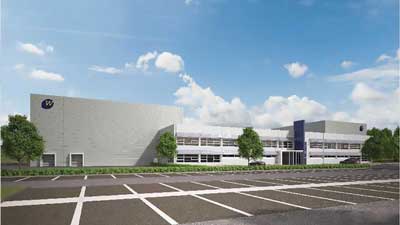 Impression of the completed facility 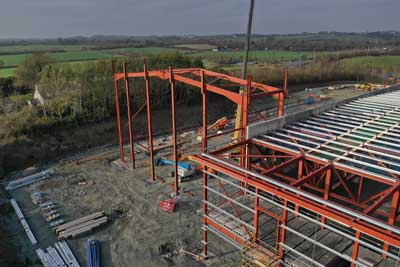 Two portal frames sit either end of the building 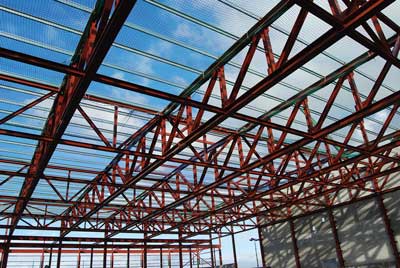 Main contractor Kilcawley Construction started work on the project last summer and began with a six-week bulk excavation programme to prepare a flat plot on the previously sloping site.

“During this programme we excavated 10,000m³ of rock and moved 40,000m³ of soil, before installing the pad foundations for the steelwork,” says Kilcawley Construction Contracts Manager Sheamus Tierney.

The steel frame has been designed as three separate structures that are linked together and feature precast fire walls to divide up the main spaces.

Either side of the production zone, two attached portal frames, one with a 28m span and the other measuring 42m wide, accommodate the goods in and despatch areas.

“Steelwork also offered us the quickest and most versatile method of construction, as well as the convenience of having the elements fabricated offsite.”

Steelwork contractor Walter Watson began its programme by erecting the large production area first and then building the attached portal frames at either end.

The 48m-long trusses that create the roof and the column-free space for the production area were fabricated in three sections, which consisted of a 12m-long centre section and two outer 18m-long sections.

“To erect these large elements, our methodology involved having six large skids laid out on the ground and levelled. Three truss sections were then laid out horizontally on top of the skids and the splice connections fully bolted-up using tension control bolts, explains Walter Watson General Manager Structural Division Trevor Irvine.

“Two of our own 80t-capacity cranes then lifted each assembled truss into the vertical position before hoisting it into its final place as a tandem lift. After it was connected to the columns, one crane was released and the secondary trusses were fitted to provide stability, before the main truss was released by the second crane.”

When fully assembled, each of the trusses weighed 21.5t and measured 2.8m-deep at the eaves and 3.3m-deep at the apex. They are all supported on 15m-high columns spaced at 6m centres.

Mirroring the same column spacing, the adjoining office block and mezzanine plant deck are both constructed with a traditional beam and column method. Both have upper floors formed with steel beams supporting precast planks.

While the office block steelwork was being finished, two precast fire walls were installed at both gable ends of the production area in readiness for the portal framed sheds to be built. The walls have large openings in the middle to allow the flow of products between the three parts of the facility.

Both portals were erected in a similar manner, with a pair of 60t-capacity mobile cranes lifting one rafter each. The final central splice was completed while the cranes were still holding the rafters in position.

The Dundalk Wasdell facility is due to be handed over in summer 2019.