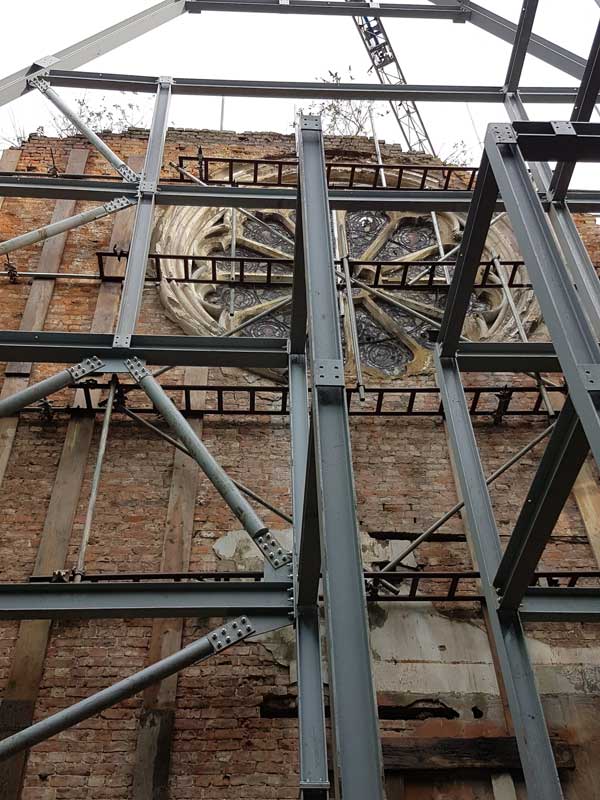 A steel-framed structure has been erected inside of a Manchester ecclesiastical landmark as part of a restoration and conversion project. Martin Cooper reports.

The new build will be linked to the restored chapel by an underground passage, excavated through the area that once accommodated a graveyard.

The chapel is situated on Upper Brook Street and the Grade II listed building has been a local landmark for many years, although in recent times it had been derelict and without a roof.

The current work will help remove it from Historic England’s At Risk register, while restoration work will repair and revive the existing fabric. This includes retention and repair of the distinctive rose window, corbels and vaulted springers along with the reconstruction of the chapel roof. 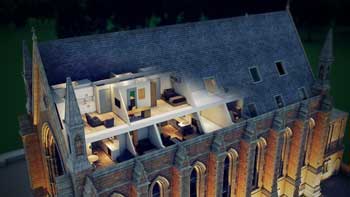 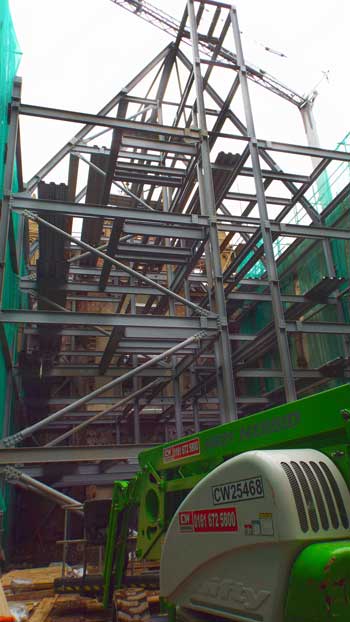 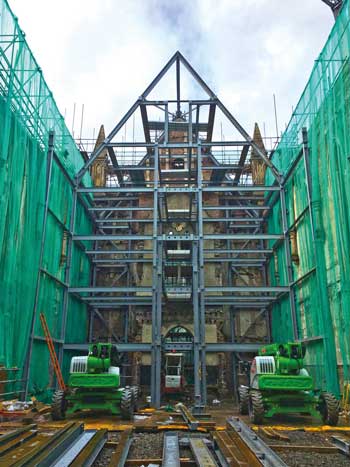 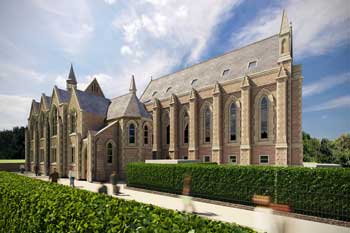 How the converted chapel and Sunday school will look 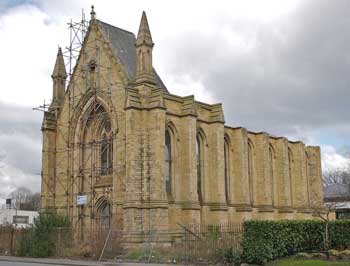 A structurally independent steel composite frame has been erected inside the chapel to form a new six-storey apartment block. This new frame supports a new steel and timber roof that has the same pitch as the original Victorian structure.

“Having an independent frame was important as we wanted minimal impact on the existing chapel walls,” says Buttress Architects’ Samantha Gill. “The steelwork sits within and not on the historic building, meaning that there are no additional loads on the stone and brickwork walls. The existing fabric is only tied back to the steel frame by small channels, and so the existing structure acts a cladding around the new structure.”

Another reason why steel was chosen was the project needed a lightweight solution for the new interior, one that would not require expensive deep foundations. So, like the original chapel walls, the new steel frame is founded on ground bearing foundations.

In order to maximise the available space, the frame utilises slim sections, typically 152mm × 152mm × 37mm UCs and 203mm × 133mm × 30mm UBs, that support metal decking with only a 140mm-thick concrete topping for the floors.

Finding suitable locations for the steelwork’s bracing was a challenge for the design team, as BuroHappold Engineer Carl Pendlebury explains: “The chapel’s existing windows prevented us from using the perimeter steelwork for bracing locations and so we had to put it within a lift and stair core, as well as in the roof.”

Steelwork is based around a 4.2m × 4.2m grid pattern for most of the floors, but has been offset across the building and in parts is irregular in order to avoid putting columns in front of, and obscuring, the chapel’s existing windows.

Another design consideration was that the new steel columns could not clash with the restored chapel vaulted springers that once supported the roof. Spaced along the two main walls at approximately 3.5m intervals, they are now key features of the new scheme and as such they have been incorporated into the third-floor apartments.

Overall the new steel frame incorporates two rows of apartments with a central dividing corridor. This configuration is only interrupted on the uppermost accommodation floor, where some slightly larger rooms are located. To support the column grid change, a series of transfer beams has been installed below this sixth level.

Prior to the steelwork being erected within the chapel, main contractor H.H. Smith had already begun its extensive restoration work on the structure, as well as preparing the chapel interior for the installation of the new frame.

The company has experience of restoring old structures and converting them for new uses. It recently completed a similar project at Ashton-under-Lyne, where a new steel frame helped turn the Victorian baths into a new business suite.

As well as working on the chapel, work was also started on the conversion of the adjacent Sunday school [see box] and the new build element.

Early in the programme, H.H. Smith installed a tower crane for the site and this was used by steelwork contractor EvadX for lifting steel over the existing walls.

“To make it easier to lift the columns into the chapel we had to splice the members in three,” explains EvadX Drawing Office Manager Andrew Roberts.

Space was at a premium and so the steel erection process had to be planned carefully.

Using two small mobile elevating work platforms (MEWPs), positioned within the chapel, and working in conjunction with the tower crane, EvadX had to initially erect the columns with perimeter floor beams to give the frame stability.

They then worked from the roof downwards, through the six floors finishing at level one. Moving onto the next grid, they then repeated this process until the final grid line.

“We knew once we had the entire steel frame up we would then have the problem of how to get the MEWPs out of the chapel, as they were hemmed in under the first floor steelwork,” adds Mr Roberts. “The narrow entrance we used to get the machines into the structure was now blocked by four new columns.”

The solution was to leave the MEWPs where they were until the floors had been cast. At this point the team were able to unbolt the column splices under the first floor, which was temporarily propped by H.H. Smith, remove the four column sections that were blocking the entrance, extract the MEWPs through the now clear entrance and then reintroduce the four column sections making good the bolted splices before removing the temporary propping.

The project is due to be complete by this month (July).

Housing 12 of the project’s apartments, the adjacent Sunday school, is now linked to the chapel via a glazed passageway. The building measures approximately 11m × 11m, and to create more floor space a new first floor has been installed within the load-bearing masonry structure.

Additional headroom was needed and so the building’s timber roof trusses have been cut and two steel cranked moment frames installed in their place. The cut trusses will be retained within the project and act as a key feature within two apartments.

The school building was in a much better state than the chapel and was being used until recently. Restoration work has included repairing the roof, by replacing missing slate tiles, and renovating the exterior.