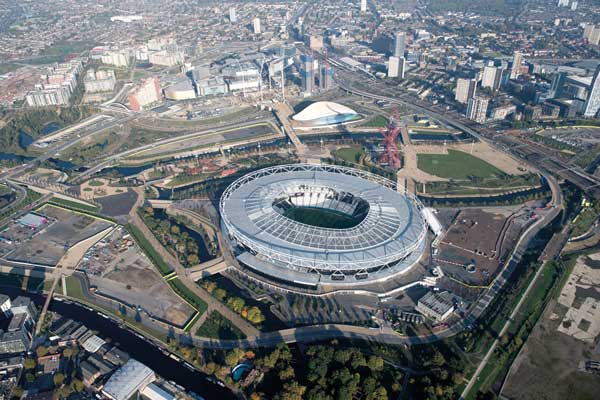 The stadium built for the London 2012 Olympic & Paralympic Games has been transformed with the addition of the world’s largest spanning tensile roof.

Components have been added, replaced, reused, and enhanced, creating a world-class venue of permanence. The stadium now boasts a new cantilever roof which at 45,000m² and an 84m maximum span is nearly six times the weight of its predecessor, and is the largest spanning tensile roof in the world.

The roof was specifically designed to improve acoustics and heighten the spectator experience, focusing sound and projecting it towards the pitch, all while reducing noise for the surrounding residential areas.

“Due to the very long spans and weight restrictions, steel was the only viable construction solution,” says BuroHappold Engineering Partner Matthew Birchall.

When Populous designed the London Olympic Stadium, they did so with an ethos of ‘embracing the temporary’ in the knowledge that, post-Games, the stadium’s function would change and, as a result, the structure would need to change too. 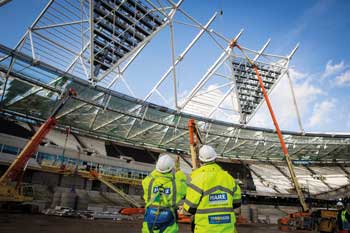 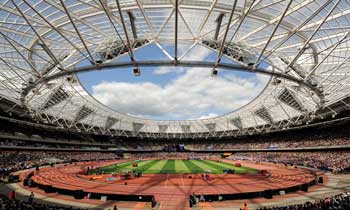 One of the main stipulations for the future use of the stadium was that it would retain its running track. To prevent this from adversely affecting the atmosphere at football matches, an automated system of retractable seating was included in the new design, with all four sides of the lower bowl able to move over the running track when in football mode. To meet UEFA rules, the roof extends fully over the retractable seating.

In order to preserve some of the Olympic Stadium’s identity, the iconic triangular lighting tower design that used to stand over the old roof has been inverted and they now appear to hang underneath the new larger roof.

The project to transform the venue began in late 2013. To facilitate the works, the existing structure had to be strengthened to accommodate far greater loads than originally designed for in the 2012 Olympic mode.

The new structure included 8km of steel cables weighing 930t, 112 steel rafters, 2,308 purlins, 422 struts, 9,900 roof panels and 14 light paddles each weighing 43t, with the whole structure weighing in at around 4,700t, nearly six times the weight of its predecessor

Early works involved the de-construction of the old roof and the strengthening of the existing structure, foundations, V-shaped main columns and the perimeter compression truss.

Strengthening of the existing structure was one of the major challenges for William Hare. Due to the additional weight of the new roof, it was necessary to replace and/or strengthen the existing V-columns and significant strengthening works were carried out to the existing compression truss.

A total of 14 new lighting paddles are positioned beneath the new roof. Each lighting paddle houses up to 41 lamps, many of which are the original lamps that shone over the stadium during the London 2012 games.

Four 600t-capacity cranes operated in tandem to lift the lighting paddles and the other roof members into position.

The tolerance in the fabrication and quality of finish was expected to be very high and the design was made with security in mind. Most of the geometry was complex and William Hare manufactured specialised jigs to fabricate some of the complex tubular nodes.

A total station was employed to set out all of the brackets for the lighting paddles, which all lean towards the pitch and are all slanted in three opposing planes. Not least, the oval shape of the stadium and the movement and tolerance requirements only gave the opportunity for single pieces to be replicated twice, this meant that half of the stadium structure was fabricated with unique members.

Following the V-column and compression truss strengthening work to maintain equilibrium until the oval was fully formed, the erectors worked in two teams at opposite ends of the stadium working in a clockwise rotation constructing the back roof first, then the front roof complete with the lighting paddles and walkways.

To ensure the correct distribution of forces through the cable support structure to the compression truss, the front and back roof are completely independent of each other.

“The roof construction represented the biggest technical challenge both in terms of sophistication of design and programme,” concludes Mr Birchall.

4D programming via BIM modelling was also key to delivering this successful project to a very high profile deadline, which was originally the 2015 Rugby World Cup, taking place in September last year. However this was brought forward to fit in the Sainsbury’s Anniversary Games which took place in July 2015. This meant that all major construction was complete by May 2015.

The challenges have been met superbly and the project is a triumph for the team and for structural steelwork, say the judges.