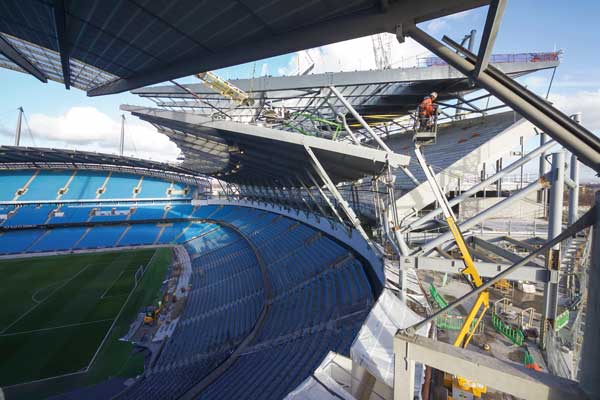 With the stadium operational during the works, the challenging expansion of Manchester City’s Etihad Stadium South Stand has added 6,000 new seats.

“The project was delivered to an extremely tight programme and within a fixed price, agreed with the contractor at an early stage of the design process to de-risk the process for the client. Input from the contractor at inception was critical to determine how to make the best of the two short closed windows, when operations not possible to achieve in the football season could be completed.”

The design was technically complex as the existing roof involved a cable net structure with a tension ring, from which steel roof rafters hung. The structural integrity of the existing tension ring relies on it running around the whole circumference of the roof; therefore any modification to the roof could not affect this, even in areas where roof rafters were removed. 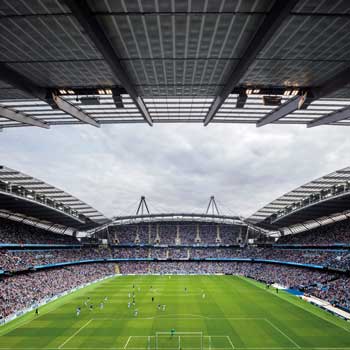 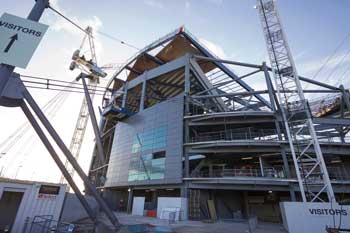 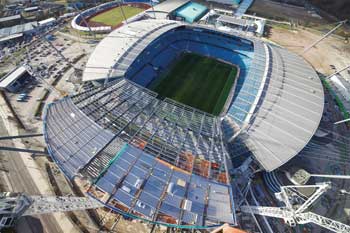 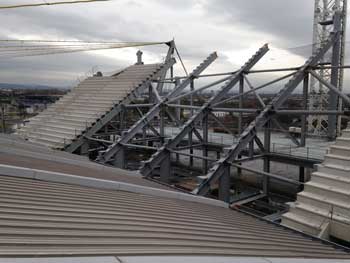 Protection of the existing cable was vital as there was no repair procedure in place and damage would have resulted in the need for a replacement and a potential two-year closure of the stadium.

Extensive design optimisation exercises were undertaken, particularly for the steel roof and the stability cores. A whole series of geometric studies evaluated the effects of different stay and mast angles, concluding on a final solution to satisfy both minimum material requirements and cost.

The stability cores were formed of steel vertical brace planes with the inclusion of outrigger bracing to add efficiency. A detailed schedule of steelwork was established for all elements, tabulating section type, weight, and tonnage and fabrication effects.

The project contains a number of highly bespoke details tuned to the complex geometries and design challenges.

These include the multi-stay connection at the top of the masts and column bases formed of spherically machined plates and rotational bearings; to allow the new design to accommodate differential movements between the new and existing structures.

Consequently the inherent beneficial strength-to-weight ratio made it the only choice for the long span roof formed of steel box section girders 45m long.

Steel also provided an advantage over concrete for the bowl frame because it could be constructed rapidly. The entire project needed to be constructed in and around the operational stadium and this required installation of preformed accurately made components.

“For the frame and bowl, the benefits of steel were its natural high accuracy of construction, and speed of erection,” explains Mr McCormick.

An area of complexity centred on the temporary modes of the stadium. For typical stadium conversions an additional tier can be built behind the existing building and a new roof constructed over the existing roof, with little interaction between old works and new.

This was not the case at the Etihad as the roof profile and supports at the end stands extended further back behind the seating, and the new upper tier would therefore project through the existing roof profile.

“We were tasked with developing a design that enabled new construction to proceed to a demanding programme, while retaining cover for spectators,” says Mr Hulme.

The ‘Interim Roof’ solution involved cutting and removing the existing back of the roof and acknowledging that this meant cutting into roof rafters which had significant locked-in forces from the dead loading of the roof. The existing roof was formed into paired bays either with or without in-plane bracing and underpinning.

Controlling geometry and movements through the construction sequence to ensure structural adequacy of the existing roof and cladding was essential. To address this, columns were jacked in pairs to offer sympathetic control.

The existing roof was removed to reveal the new terrace behind and 7.5 weeks of works were undertaken in less than 4 weeks. The new design respects the geometry of the existing building and, while the inserted end stand is significantly larger than the previous stand, it blends in as part of the original design.

For modification works, access was required to the underside of the existing roof above the current terracing. A unique solution invented for this was a movable platform that supported the weight and dynamic effects of the MEWP operating on it.

The extension, completed within 16 months, was opened on the 16 August 2015 in front of a record crowd of 54,331 people. Transforming football stands is about capacity and ticket sales and the new stand sets the parameters for further expansion through its masterplan.

Summing up the judges say, the work tested all facets of steelwork construction to their limits, including design, fabrication and construction. A stunning testimony to all concerned and to the capabilities of steelwork, which merges seamlessly into the existing structure.