Showing off the past 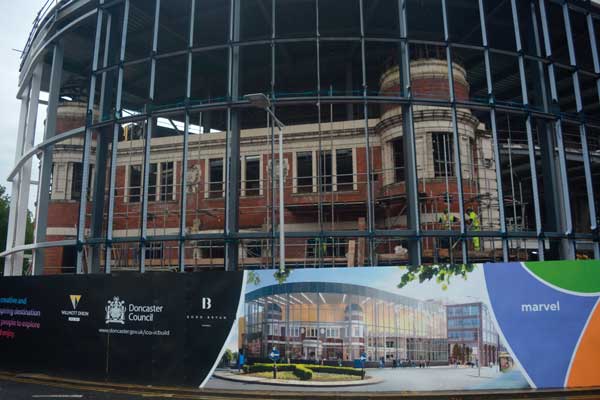 The retained structure can be viewed within the new building

Accommodating many of Doncaster’s historical relics, a new steel-framed cultural hub has also been designed to surround and exhibit a retained Edwardian school entrance.

The new steel-framed building encapsulates part of the frontage of the former Doncaster Grammar School for Girls. A glazed elevation will allow the retained structure to be visible from the street and thereby make it one of the borough’s most eye-catching buildings. 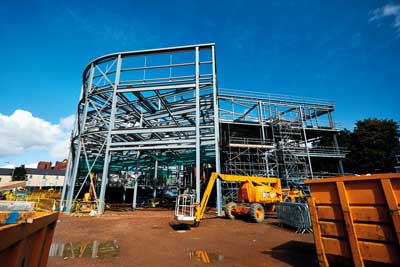 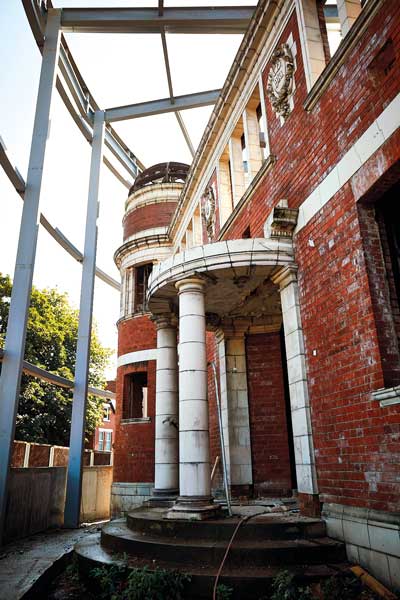 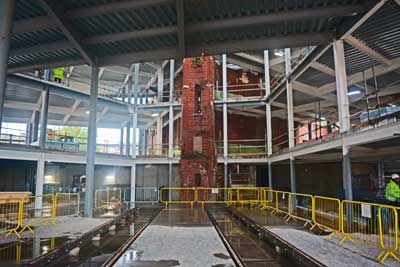 Main contractor Willmott Dixon started onsite during October 2018, and inherited a site where much of the demolition had already been completed.

“The school had been closed for a number of years and our initial task was to complete the demolition process that had been partially undertaken. We then had to secure and retain a wedge-shaped portion of the building. This contains the entrance, which consists of two turrets connected by a portico, behind which the former main staircase is located,” explains Willmott Dixon Operations Manager Richard Stowell.

The retained portion is a masonry structure and this had to be temporarily propped and supported by a scaffold system while the steelwork was erected.

Steelwork wraps around and over the retained structure, but does not connect into it, as the old and new structures are independent, with only the floors forming a link.

“We needed a material that would allow us to span over the retained structure, and this was one of the main reasons for choosing a steel-framed solution for this project,” says Tier Consult Engineer John Cooper.

“Steelwork also helped us easily create a feature cantilever that is positioned above the main entrance.”

Spanning over the top of the two-level high retained structure is a 20m-long x 4.8m-deep steel truss, which creates the new building’s second floor within its depth as well as supporting the new roof.

The cantilever Mr Cooper is alluding to is located to the side of the retained structure. Here a 10m-long x 2m-deep Westok cellular beam, with 1,400mm holes, has been positioned at roof level to create the entrance feature.

There will be windows in this part of the building and so a truss was ruled out as its cross members would have been visible through the glass.

The solution was to use a large Westok cellular beam – chosen for its lightness compared to a solid member – which supports the cantilevering second floor via hangers.

Kloeckner Metals UK Westok Design Team Manager John Callanan commented: “Detailing of the cantilever and backspan arrangement to the large Westok was quite intricate. We manufactured the cantilevered end of the section with a gradual rise, to ensure the tight deflection limits in this location were adhered to.”

Founded on CFA piles and pad foundations, the steel frame forms a glazed curved frontage that sits 4m in front of the retained structure. A series of 16m-high 400mm x 200mm box section columns support the glazing and the roof.

As well as allowing people to see the old school entrance from outside, the glazing will flood the interior of the building with natural light and create a pleasant area for customers to sit in. This area will be used as an overspill seating area for the café, which will be located within the ground floor of the retained structure.

Behind the café, the restored staircase will provide access to the first floor of the new building, while an extension to the staircase will continue up to the second level.

The site slopes, so behind the retained structure the building drops down and includes a lower ground floor. This level will accommodate a museum for the Kings Own Yorkshire Light Infantry and a rail heritage museum displaying two locomotives built in Doncaster.

Much of the central portion of this floor, where the locomotives will be positioned, will be a double height space, with ground floor viewing galleries positioned along either side.

These will allow visitors to observe the rolling stock from above, while a centrally-positioned atrium, also partially located above the trains, will help to illuminate the exhibits and allow visitors on the first floor to look down on the trains.

A set of sliding doors and two sets of rail tracks, that extend beyond the rear of the building, will allow the locomotives access into the building.

A series of 18m-long beams span the double-height space over the trains and form the second floor of the building.

Meanwhile, the ground floor will also accommodate a children’s and adult lending library, while the first floor will house further museum space, and an education and conference space.

“However, for the second floor this is increased to a 3.7m floor-to-ceiling height as this level accommodates a gallery.”

This uppermost level also provides space for an outdoor plant zone. Although this area has no roof, it is screened off with the same metallic gold-coloured cladding system that adorns much of the building.