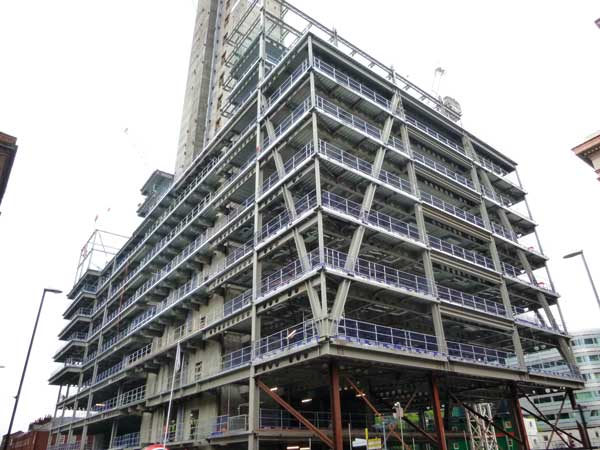 The 7.5m-deep eastern cantilever is framed by a Vierendeel truss

Featuring three cantilevering façades, No.1 Spinningfields will be Manchester’s third tallest office building and the last structure to be built in the city’s new business district. Martin Cooper reports.

What is more, topping out at 20-storeys high the building will not only be one of the highest structures in Manchester, it will claim the accolade for the city’s tallest office block built in the last 50 years.

The project will also act as an anchor to the Spinningfields development and as such a standout design will be achieved via three cantilevering façades and a fully-glazed exterior.

Located on an island site surrounded by roads on three sides and a pedestrianised zone on the fourth, the cantilevers act as highly visible architectural features on what would otherwise be a standard cityscape.

Work on the project began in July 2015 and early works included deepening the basement left over from the previous building from one to two levels.

Although the project is structurally one large building it is a steel-framed structure with two distinct parts. Each with their own concrete core, one section extends up to the full 20-storey height, while the western portion of the building tops out at nine-storeys.

At ground floor level these two parts are separated by a pedestrian walkway that cuts through the building creating a shortcut between Quay Street on the south and Hardman Square to the north. 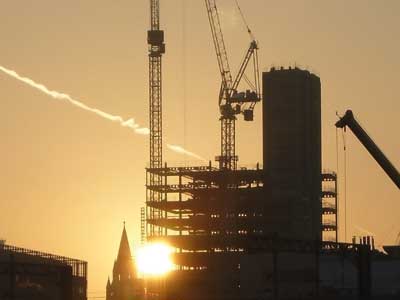 An early start for the steel erectors on the eastern cantilever 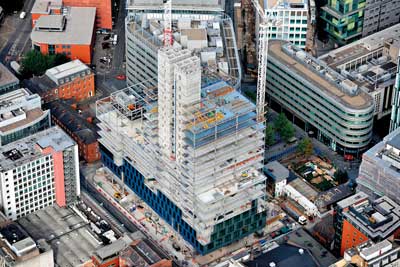 The building completes the Spinningfields materplan

“Steel was chosen for its ease of construction and for its long span qualities,” explains BAM Construction Design Manager Chris Edwards.

The office floorplates which extend upwards from first floor level are erected around a large grid pattern offering spans of up to 12m. The large open floorplates, so desired by today’s commercial tenants, are largest on the levels up to seven, where the two portions of the structure form one large open-plan area.

The lower 2,300m² floorplates, from levels 1 to 7, are said to respond to large format businesses, with the upper 930m² floorplates providing accommodation to attract smaller firms.

“To increase the available usable office space within the building both of the cores are offset along the southern elevation, instead of in a traditional position in the structure’s middle,” says RoC Consulting Design Director Jon Smith.

Steelwork contractor William Hare has used Fabsec cellular beams throughout the building for service integration within the structural void.

The most complex part of the structure’s steel frame is the eastern cantilever which, as well as creating an architectural highlight for the building, also creates a canopy over the main entrance.

The deepest of the building’s cantilevers, this feature element is 7.5m-deep and extends from level 1 up to the underside of level 7, thereby incorporating six floors.

A large six-storey Vierendeel truss positioned along the cantilevers façade forms and supports this feature element. The outer corners of the truss are supported by two V-shaped nodes, each weighting 19t, that not only connect with the first floor beams and the truss, but also a feature vertical CHS column that frames the elevation.

“However, the cantilever is so deep that extra supports are required in the form of two plane trusses positioned at level 1 and the underside of level 7, that support the Vierendeel and are braced back to the main tower’s core,” says Mr Smith.

This forms a kind of structural sandwich with the six floors of the cantilever positioned between the trusses.

Some of the project’s heaviest pieces of steelwork are located in the area between the eastern cantilever and the main core. Because of the long spans and the extra loadings generated by the cantilever and its associated trusses, many of the columns are large bespoke fabricated plate girders.

Carrying the extra loadings from this area are eight steel columns that go all the way down to the lowest level and are founded directly onto pile caps.

The other two cantilevers in comparison are quite ordinary as they are formed by beams and columns connected to the main steel frame. At 3.5m deep, the western cantilever extends from level 3 up to level 7, the highest point on this side of the building.

Meanwhile the north cantilever, which is 4.5m-deep, starts at the level three and extends all the way up the highest part of the building to level 20.

The tower’s two uppermost floors, level 19 and level 20, will house a rooftop restaurant and a plant area respectively.

No.1 Spinningfields is scheduled to be complete by mid-2017. 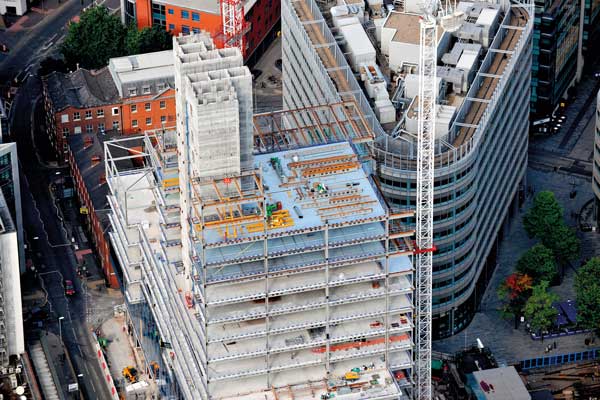