On budget with cellular design 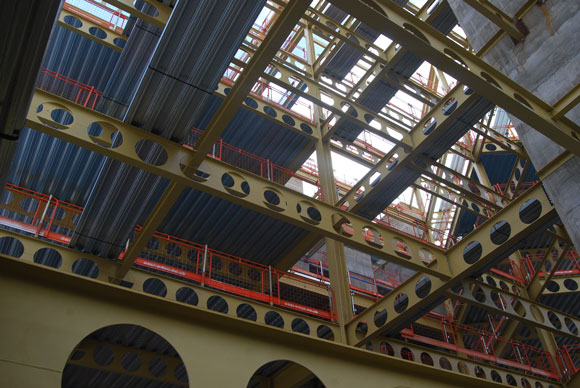 Cellular beams have provided the building with services flexibility

The latest phase of an on-going commercial development in Leeds has reaped the benefits of using a steel-framed solution incorporating cellular beams.

One such commercial scheme, known as Wellington Place, is located five minutes walk west of the city centre. Here a number of medium-rise commercial, retail, leisure and residential blocks are planned for a site once occupied by Leeds Central Station.

The station closed in 1967 and all that remains of the site’s transportation heritage is a wagon hoist tower, once used to lift goods, and the viaduct over the River Aire and Leeds and Liverpool canal.

Developer MEPC envisages turning the site into a prestigious new multi-use quarter and so far it has completed one commercial block (10 Wellington Place), started on 6 Wellington Place, with another building (No.5) about to kick off in the coming months.

All three buildings have different designs and footprints but one thing they do have in common is that they all have steel frames. 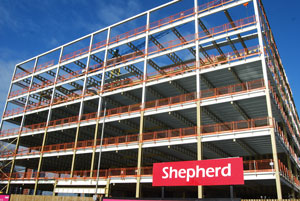 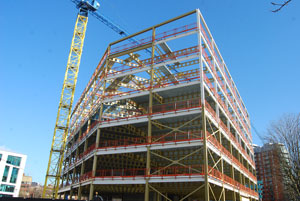 6 Wellington Place is a six-storey (including ground floor) structure with a basement car park offering 9,600m² of Grade A office and retail space.

The structure is wedge shaped in profile, with four elevations. From the widest south facing elevation the building tapers down to the narrowest northern façade.

The roof slopes down from the southern façade and conceals a plant deck, while the rooftop of the narrowest part of the wedge accommodates an outdoor terrace for the topmost offices.

Arup did the original concept design for No.6, and this was then value engineered by the Shepherd Construction-led project team to make it as efficient as possible (see below).

“By using cellular beams throughout the building we’ve made the steel frame lighter and more cost-effective,” says Shepherd Construction Project Manager Dan Miller. “A lighter frame requires shallower foundations which means we have a quicker programme.”

The steel columns begin at basement slab level and a regular grid pattern, based around columns spaced at 7.5m and 11.8m centres, extends upwards to roof level.

A slightly higher floor-to-ceiling height of 5.5m is accommodated within the ground floor, which will house the office entrance foyer and some retail units. Another prominent feature is the centrally positioned full-height atrium that will allow natural light to penetrate the building’s inner zones.

The majority of the project’s steelwork has been erected using the on site tower crane working in conjunction with two MEWPs, each with a 40m-high maximum reach.

This was the heaviest steel member erected for the job and it required Billington to bring a 60t-capacity mobile crane to site.

However this wasn’t the largest piece of craneage needed for the steel programme. As the majority of the steel frame was erected from within the building’s footprint, there came a point when the company had to complete the final grids from outside the footprint.

The MEWPs gained access onto the basement slab via a temporary ramp, but as the job progressed this had to be removed. This left the MEWPs, which weigh more than 20t each, with no way out other than being lifted.

“The MEWPs are very large and were chosen for their reach which proved to be invaluable during the erection programme, but to get them out of the basement we had to use a 220t-capacity mobile crane,” says Mr Higgins.

Billington Structures completed the steel programme in February and, as well as erecting 700t of steelwork, the company also installed 3,000m of its easi-edge safety barriers and 14,000m² of metal decking.

6 Wellington Place is scheduled for completion in December. 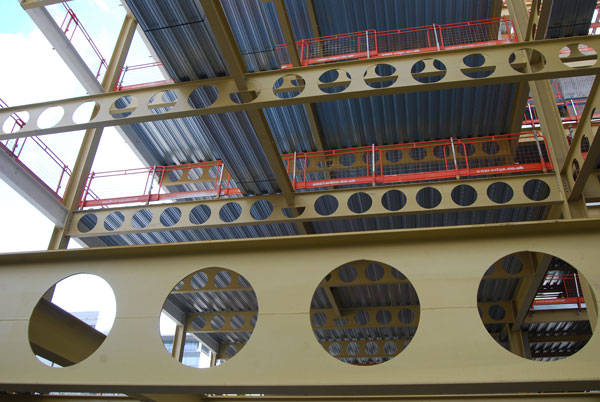 The floor beam solution comprises 11.8m span Westok floor beams spaced at 3.75m centres. The architect had placed a 700mm depth limit on the beams, and so Westok provided a minimum 500mm diameter cell hole across the full width of each floor beam. This ensures the current service requirements are met, and also provides for maximum flexibility in future-proofing the service needs of the building.

ASD Westok Design Team Leader John Callanan comments: “This is a very good example of the return of the commercial office sector. As we move out of recession, we’ve noticed a significant upturn in steel-framed office developments.”