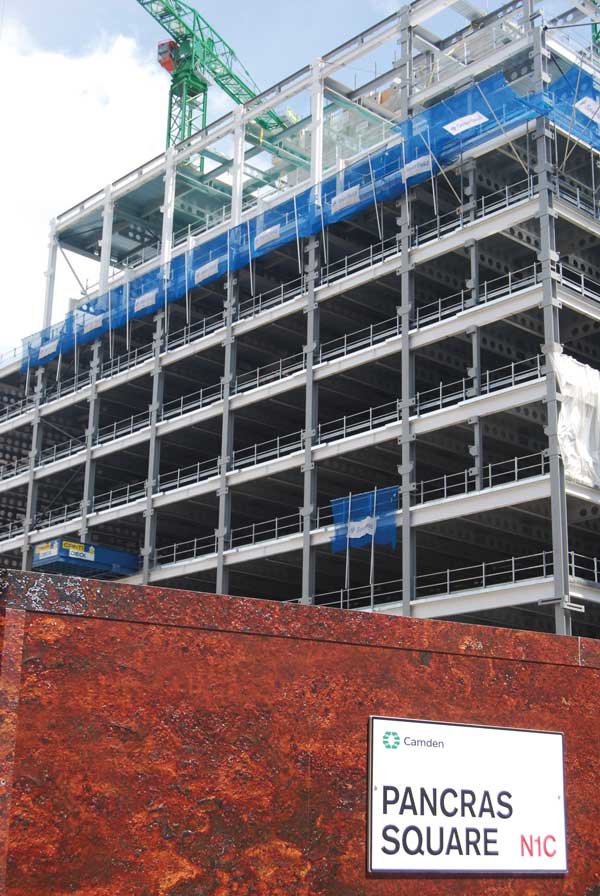 A new London headquarters for a multinational advertising and public relations company, is rapidly taking shape with the aid of steel construction. Martin Cooper reports from the latest project at Pancras Square

One of the initial phases of this huge and ambitious development is Pancras Square. Located between the busy rail terminals of King’s Cross and St Pancras International, the scheme will consist of seven retail and commercial buildings positioned around a wedge-shaped public square.

Interestingly Pancras Square’s central landscaped realm sits on top of a steel podium deck (see NSC January 2013) that accommodates an underground, shared delivery space for all of the buildings.

Five of Pancras Square’s buildings have been completed so far, with the final two – both of which are steel-framed – currently at different stages of construction.

The more advanced of the two is Three Pancras Square, where the steel frame topped out last month (August).

This 11-storey 15,230m² building will offer generous office floor plates of 1,700m² over the 10 upper levels, while the ground floor will house a double height reception area as well as retail units. 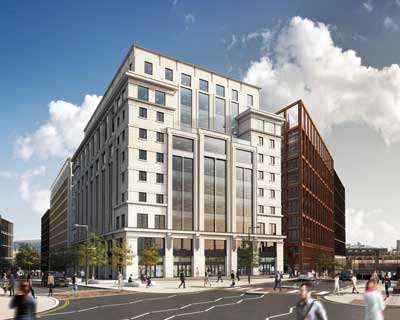 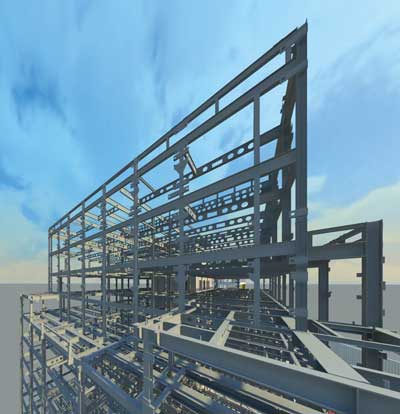 Cellular beams are used throughout the structure 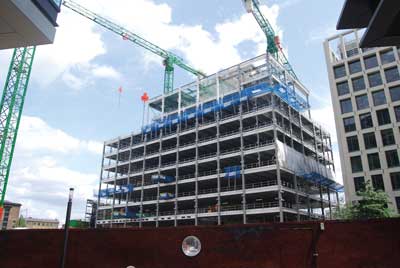 Next door to 3 Pancras Square, one more steel-framed structure has just begun construction

“In order to get an economic building with long spans, the structure has been designed with a steel frame utilising cellular beams allowing an integrated services solution on all floors.”

According to BAM Construction, the choice of steel as the framing material suited the programme, particularly the installation of the exterior glazing, which is much easier with steel.

Initially the structural design envisaged numerous tenants, possibly one on each floor, within the completed building.

Steelwork contractor Severfield’s design team spent a considerable amount of time early in the project coordinating design with BAM Design, in advance of its construction drawings being issued.

This proved to be beneficial even though things changed early in the programme when Havas, the international advertising and public relations company, secured the lease for the entire buildings for its new London headquarters.

“Havas wanted to change the design and add two atria within the building to allow light to penetrate the inner office space and to allow the installation of a feature staircase leading up from the reception area to tenth floor level,” explains BAM Construction Project Manager Geoff Hall.

Here, once again, the choice of steel helped the project team enormously as design changes were easily absorbed into the structural design as steelwork contractor Severfield was still in the early stages of its fabrication programme.

Sitting atop a two-level reinforced concrete basement that connects into the shared podium, the building measures approximately 58m × 36m and it is 46m high to fit into the overall height scheme of the Square.

Fabsec cellular beams have been used throughout the project and these span up to 13.5m. This creates a near column-free internal space on every office floor. However as the main core is positioned slightly off centre, there is one row of internal columns spanning the north elevation, as a single beam would have been too deep and heavy to span more than 20m.

The project’s beams were also subject to a design change, albeit in the very early stages of the programme.

“We redesigned all of the cellular beams to our own Fabsec design as this offered the best and most economical solution,” explains Severfield Project Manager Glen McCleery.

As well as accommodating all of the building’s services within their depth, some of the project’s cellular beams have to double up as transfer structures.

On floors seven and nine the building steps back to accommodate outdoor terraces and so larger beams were required on these levels.

“On floor seven some of the beams are supporting three floors to create the terraces and on floor nine they are holding up two,” explains Mr Tailor. “For this reason, in these areas the cellular beam sizes had to be increased from 600mm deep sections – used throughout the building – to 750mm deep sections.”

So as to keep the floor-to-ceiling heights the same on the floors with the deeper Fabsec sections, the slabs have been cast around the flange of the beams instead of on top of the steelwork.

Severfield fabricated these cellular beams with an internal shelf plate, stiffened at nominal centres to accept the metal decking within their depth.

“Because there were a lot of individual steel members in the core we split the erection between the two onsite tower cranes so we could erect the main frame at the same time,” explains Mr McCleery.

As the building takes up the majority of the project’s footprint there was no room for positioning mobile cranes and so all of the steel erection was carried out via the two onsite tower cranes.

“None of the steel sections could be heavier than 14t in order to not exceed the tower crane’s lifting capacity,” says Mr Hall. “Even the deeper Fabsec beams have been designed economically and only weigh 11.5t each.”

Prior to steelwork erection commencing, the concrete basement, ground floor slab and core had all been completed. The cast slab gave the steelwork erectors a good working surface to put their MEWPs on.

Severfield’s steel erection sequence consisted of erecting the first three floors from the ground floor slab. From then on the company erected two floors at a time, using man-riders, working off of the previously installed metal decking surface. 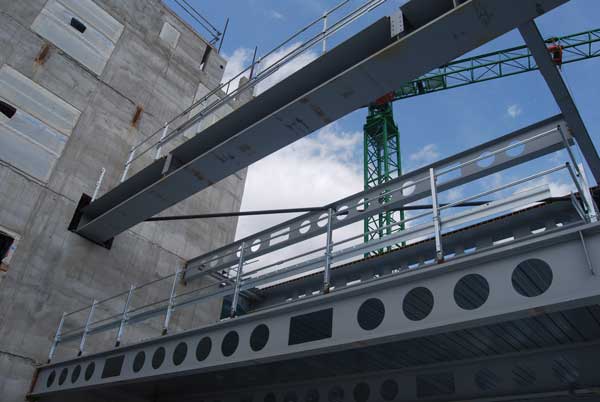 Cellular beams are a particularly attractive option when integration of services is important to minimise construction depth, in combination with long spans. The regular spacing of large holes allows flexibility in the location of services under the composite floor.

Cellular beams can be engineered to provide a very structurally efficient solution; asymmetric beams may be fabricated from two rolled sections, or cellular beams may be fabricated from plate, allowing both flanges and the web to be chosen to suit the solution.  In design terms, a cellular beam is really a Vierendeel truss, so the web posts (the material remaining between holes) are subject to bending moments, as are the top and bottom tees.

In addition to the global bending resistance, several local failure modes must be assessed, including web post bending, buckling and shear. Openings can be arranged asymmetrically within the beam depth, or elongated; these details may require stiffening locally. The presence of openings also affects the serviceability limit state due to the loss of flexural stiffness at the openings and the additional deflection due to Vierendeel bending. The ULS and SLS verifications can become complex, so the design of cellular beams is best suited to bespoke software, which may also include assessment of the resistance under fire conditions.

Although design will undoubtedly be carried out using software, guidance is available in SCI Publication P355 Design of composite beams with large web openings. This publication describes the design model for beams with web openings and despite the title, the design model may be applied to non-composite beams. The publication presents guidance in accordance with Eurocodes 3 and 4, and includes a numerical example – although design verification by software is encouraged!

General guidance on structure-services integration may be found in SCI Publication P166 Design of steel framed buildings for service integration. This publication presents layouts of ducts and terminal units for Fan coil and VAV air-conditioning systems in various forms of long-span steel construction.