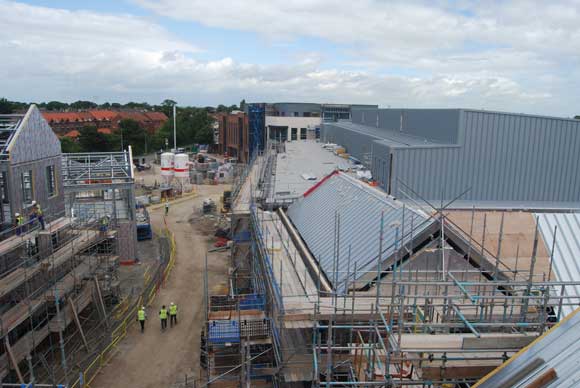 A new shopping and leisure destination takes shape in Beverley

The project includes a Debenhams anchor store, a five-screen cinema, a Premier Inn hotel, multi-storey car park and a host of other retail outlets.

Located on the opposite side of the railway tracks to the historic town centre, Flemingate has the potential to invigorate Beverley by creating a new shopping and leisure destination.

Covering an area of 11-acres, the site has a long history of use as it was previously occupied at various times by a tannery, chemical works and a museum.

Overall the scheme consists of six individual blocks of varying sizes and all of them are braced steel-frames with the exception of block G (an 80 room Premier Inn), which has a steel ground floor podium supporting two timber-framed upper floors. 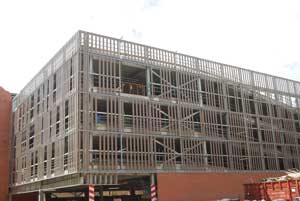 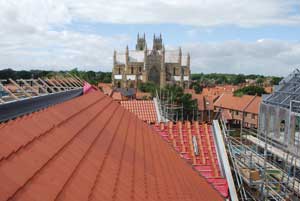 The Minster overlooks the Flemingate development 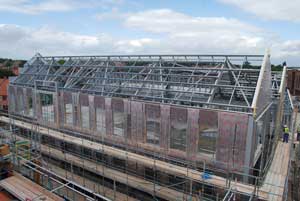 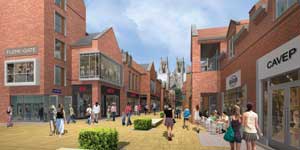 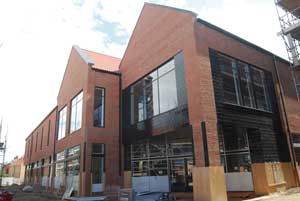 The initial design for the Flemingate development was done by architect The Harris Partnership and structural engineer Curtins.

The structural steelwork was then designed, fabricated, supplied and erected by Hambleton Steel, as part of a specialist design and build contract.

“Using structural steel for the project was the only way to go for buildability and the necessary speed of construction,” explains The Harris Partnership Architect Andrew North.

Speed is of the essence for this project as the scheme is due to open at the end of this month (October). Consequently, the steel erection programme started as early as possible with the erection gangs following on immediately behind the piling and foundation workers.

Prior to Willmott Dixon beginning its construction programme, demolition work had already been completed and the site remediated.

“It’s a big town centre site and logistics are a significant challenge on this job, as well as coordinating all of the onsite trades,” says Willmott Dixon Project Manager Russ Parks. “We also had four entry points to allow materials onto the site to continually feed our five mobile cranes.”

The Debenhams anchor store (block C)    is the driver for the scheme, so it was the first part of the job to be piled and then have its steel frame erected. This then allowed the client the maximum amount of time to complete its own internal fit-out programme.

The two-level Debenhams store has been constructed around a steel grid pattern of 9m × 5m, which is the same as the other two retail blocks on the scheme (blocks A and E).

Block A was the second to be erected. Incorporating a five-level multi-storey car park and 122m-long outdoor shopping mall, this is by far the largest of the project’s structures.

“Approximately half of the project’s steel tonnage was needed for block A,” says Hambleton Steel Contracts Manager Doug Willis. “If you put all of its steel members end to end they’d stretch 18km!”

The multi-storey car park is based around a large 10m × 16m grid pattern, which incorporates cambered cellular beams and galvanized external steelwork.

Although the attached retail mall’s multiple units have been constructed around the same grid pattern as the Debenhams store, these shops are all double height spaces that can incorporate mezzanine levels in the future if the clients so wish.

“Future-proofing the retail units is one of the reasons steel was chosen, as adding mezzanine levels will be an easier task with steel,” says Mr Parks.

Steel has also proven to be beneficial on block E, where more than 30% of this structure’s retail zones have been subject to design changes requested by the clients.

Hambleton incorporated many of the changes into the steel design, prior to the steelwork arriving onsite, however some have had to be done retrospectively.

“One of these changes has involved us extending block E by an extra couple of bays,” says Mr Willis. “While extra steelwork has been added to link this block to the adjacent cinema structure (block B).”

Block B, which is another large braced steel frame, accommodates a six-screen cinema complex situated above a ground floor series of restaurants. This structure was initially going to house five screens, but with some nifty designing, an extra sixth and smaller screen was fitted into the same area.

For acoustic performance reasons all of the cinema seating support columns have been founded on acoustic pads. The internal seating rafters, although designed by Hambleton, were omitted during the steel erection programme.

The rationale behind this decision was that they did not want to obstruct the work of all the follow-on trades, so the seating steelwork was delivered to site and erected by the client’s fit-out team towards the end of its programme.

The final structure to be erected was block D, a two-storey office building. This structure was initially designed to accommodate restaurants but the change of use was easily incorporated into the steel design before any of the material reached site.

“The entire internal layout changed,” says Mr Willis. “Even though the change was late in the day, we were able to redesign the structure before any of the material was due onsite.”

Around 700 new permanent jobs will be created by the Flemingate project, giving the town of Beverley a huge economic boost.

Wykeland Managing Director Dominic Gibbons adds: “The retail element of Flemingate will attract shoppers who might otherwise head for York, Leeds and Meadowhall (Sheffield), while the combination of new restaurants, additional car parking and job creation will enhance Beverley’s already excellent reputation as a major shopping and tourist destination.”