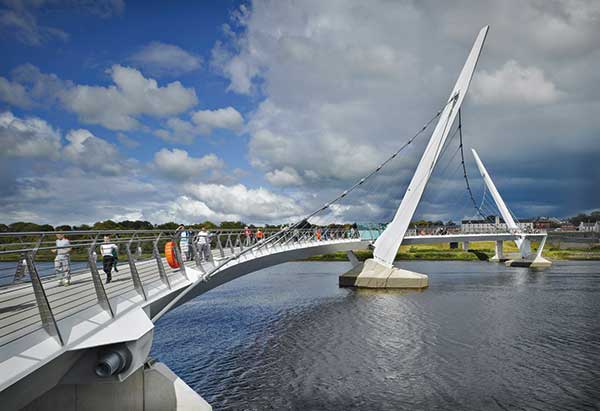 Linking historically divided communities on either side of the River Foyle, the Peace Bridge was conceived as a landmark structure and a focal point for when the city becomes UK City of Culture in 2013.

The Peace Bridge in Derry-Londonderry has quickly become a symbol of recent political and cultural changes in Northern Ireland. Connecting two historically divided communities on the east and west banks of the River Foyle, it is an aesthetically pleasing expression of the unification of the city.

Funded from the European Union’s PEACE III Programme managed by the Special EU Programmes Body (SEUPB) it is the most significant capital project in Derry-Londonderry for decades and of fundamental importance to the city’s regeneration plan.

The structure is a 312m long S-shaped self-anchored suspension bridge for pedestrians and cyclists, divided in half with each portion supported from a single 38m high inclined steel pylon.

At the centre of the river these systems cross over to form what has been called a symbolic handshake. “We have two similar structural systems, back to back, overlapping in midstream,” explains James Marks, Wilkinson Eyre Associate Director.

As well as supporting the deck, the catenaries are used as a device to manipulate views and at midspan they cradle the pedestrian on the deck at the most exposed part of the crossing.”

The bridge deck is an orthotropic steel triangular box section, fabricated from painted weathering steel and stiffened both longitudinally and transversely. The width of the deck varies, from 3.5m at the ends to 4.5m at pier locations.

An array of hanger rods, comprising of helically spun spiral strands, supports the deck at one edge only. They are spaced along the concave edge at approximately 4.5m centres.

He adds: “The close involvement and cooperation of the entire team during the design phases assisted us in developing an efficient design to suit the fabrication process; this was a key element of the project,”

Prior to fabrication, a comprehensive 3D model of the pylons and bridge deck was created, and this assisted in visualising the structure and simplified the checking process. Subsequently it was also used to produce component, fabrication and assembly drawings.

A large barge equipped with a crane, which had previously transported the steel sections from a temporary sub assembly area in Londonderry Port, was used for the erection process.

“The deck was brought over from our works in Wales in lengths of approximately 30m and the pylons as complete 38m long sections. As there was no road access to the erection site we had to deliver and erect everything over the river from the water,” explains Peter Samworth, Rowecord Engineering Contracts Manager.

Following the installation and welding of all the deck units, the suspension cable installation was undertaken in two stages. In the first stage the cables were anchored to the deck and pylon anchorages using a system of multiple winches and guides that hoisted the cable up from the deck. All of the hangers and clamps were attached to the cables as they were winched up to minimise working at height and over water.

In the second stage the suspension system was stressed by an innovative system of jacking the main catenary cables only, as opposed to incremental stressing of individual hangers.

The judges say this excellent bridge is much loved within the city and across Northern Ireland.