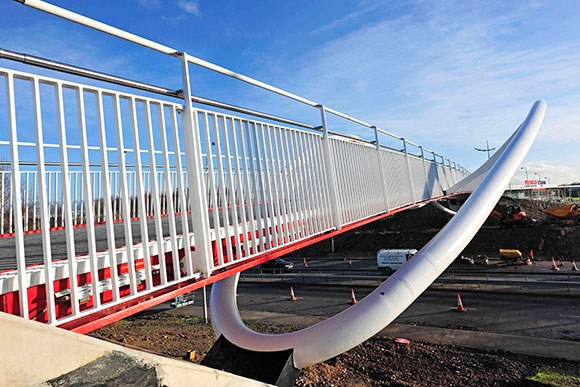 A signature steel bridge has been opened in St Helens to link the new rugby league stadium to the town centre. NSC reports.

Last month (January) saw the official opening of an iconic footbridge in the centre of St Helens, a structure which has already captured the public’s imagination with its eye-catching design.

The Saints Footbridge will take pedestrians to and from the town centre to the new rugby league stadium and a large Tesco store. The stadium officially staged its first match last month, and many of the attending spectators used the bridge to cross the busy A58. 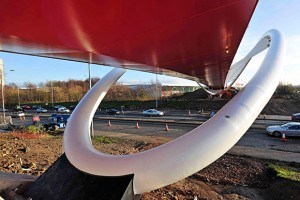 The continuous arch is said to resemble a rugby ball when viewed from above.

Adding to the bridge’s symbolic status, it is said that viewed from above, the steel arches on the structure are shaped like a rugby ball, which is more than apt for a town synonymous with the sport of rugby league.

“We wanted an iconic footbridge,” says St Helens Council Project Engineer Les Fairclough. “One which would stand out and become a landmark.”

Galliford Try won a £1.2M design and build contract for the project and initially appointed architect Moxon and structural engineer Flint & Neil to come up with a unique design. The scheme has delivered a sleek 4m wide x 54.6m long bridge, which has a deck suspended via flat plate hangers from two parabolic arches formed from 610mm diameter CHS sections.

The project kicked off in February with site clearance work that involved more than 2,000t of material being excavated and then reused for the approach footpaths. After this 24 concrete bored piles were installed into each of the two embankments. 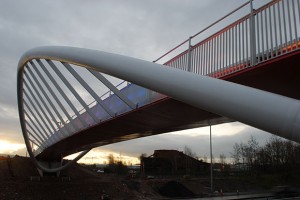 Bespoke hangers connect the arch to the deck

Above ground, the bridge’s superstructure is made of structural steelwork, fabricated, supplied and erected by Rowecord Engineering.

Explaining the choice of steelwork contractor, Mr Fairclough says: “The bridge arches required some extremely complex fabrication for each of the base plate connections and the structural engineer recommended we use a BCSA member in order to guarantee getting the necessary quality.”

Before any steelwork arrived on site, however, Galliford Try had to liaise with all of the project team members to address the main risks to the project associated with the installation of the bridge. Its unique shape presented challenges both from potential settlement and the difficulty of installing fixed length hangers between the deck and arches.

“We expected a 75mm sag when the bridge was erected so the structure has some leeway incorporated into its design,” says Mark Foster, Galliford Try Site Agent.

The bridge could be prone to movement when it accommodates the large numbers of spectators on match days. This has been guarded against with the installation of tuned mass dampers which absorb the vibration energy and reduce accelerations caused by collective footfalls to an acceptable level.

There are four dampers in total, two positioned at approximately the third points in the span. The structure is also future-proofed with bays for extra dampers to be installed in the arches and one more in the deck.

Erecting the steelwork began with the deck being brought to site in three pieces, each complete with parapet panels. Using a 250t capacity mobile crane, Rowecord initially lifted in the central 27m-long central span and then the two outer sections. They were all landed on temporary trestles and then bolted together through the end diaphragms which acted as a backing strip for the welds between the sections.

With the deck in place and still resting on trestles, the arches, which are positioned either side of the bridge, were installed. These tubular sections were brought to site in six pieces; two end U-shaped sections with temporary bolted connections at the ends and two further sections for each of the two arches with matching bolted connections.

“We assembled the arches on temporary trestles and welded them together,” explains Rowecord Project Manager Peter Samworth. “They were then lifted by crane and bolted to the splices on the end U-sections which had previously been installed. The tube was then completed over the splices to give a structurally continuous member.” 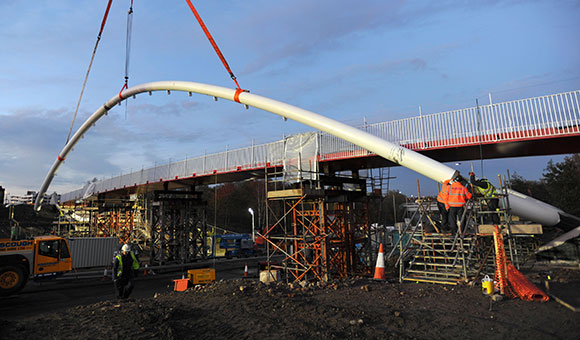 The assembled arch is lowered onto the U-shaped connection

Each fully assembled arch is approximately 42m-long and weighs in the region of 29t.

The final piece of the erection process involved connecting the arches to the deck via a series of hangers. Fabricated from 50mm thick and 200mm wide plate, there are 14 of these bespoke hangers for each arch. They range in length from 2.5m up to 6.5m.

“The hangers are all individual and don’t necessarily match the corresponding member on the other side of the bridge,” explains Mr Foster. “This was again to allow for tolerance and any potential sag.” 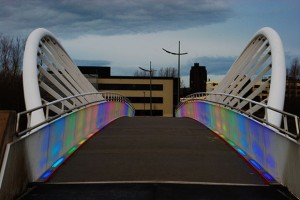 The bridge is illuminated by colour-changing LED lighting

Once the hangers were installed, the bridge was jacked down on to its bearings, the trestles removed and the structure’s handrail completed.

In total Rowecord was on site for one month, erecting, assembling and painting the steelwork. All of the steel was given three coats of paint prior to being erected.

Prior to the bridge’s January opening, the final works included the installation of LED lighting along the deck and four LED spotlights on the corners of the embankments. Adding further to the structure’s landmark status, the lighting will illuminate the bridge with changing colour from dusk to dawn.