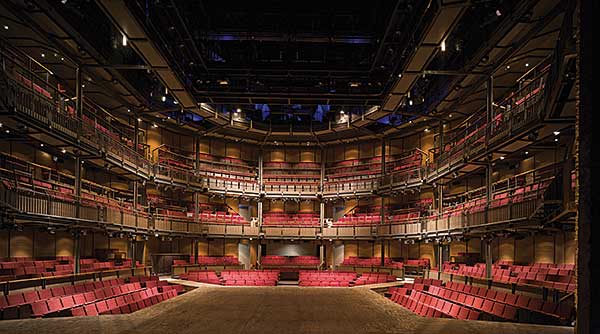 At the heart of the £112M renovation of the Royal Shakespeare Theatre is a new auditorium containing a thrust stage which brings audiences closer to the performance.

“We wanted to move away from the 19th Century proscenium design to a theatre which celebrates interaction,” explains Royal Shakespeare Company Artistic Director, Michael Boyd. “The best way to achieve this was in a bold thrust stage one room auditorium.”

The new auditorium sits in between the retained 1930s Grade II listed Scott Foyer and the theatre fly tower. There was little room in which to work, and to add to the overall complexity two foyer areas were also being erected either side of the new auditorium.

“It was an incredibly complex project,” explains Andrew Wylie, Associate Director for Buro Happold. “We had to look at which parts of the building were staying up, which were coming down and, importantly, if it would stand up. How do we keep the retained bits of building safe during the construction?”

Structural steelwork was used on a number of key elements and the most striking were the roof trusses, which span the new auditorium. The two main trusses are each 24m long × 3.5m deep and weigh over 30t each.

As work was going on around various parts of the site, steelwork contractor Billington Structures had to bring in a mammoth 500t capacity mobile crane to lift the trusses.

“A combination of reach, weight and careful location within the tight footprint of the building necessitated the size of the crane, anything smaller wouldn’t have had the necessary reach,” says Paul Hayes, Billington Structures Project Manager.

The two trusses are supported by the new inner concrete walls of the auditorium and are connected by a series of steel support beams.These are then connected to new steelwork which forms a roof over the entire renovated building. 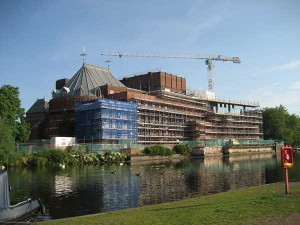 Along the riverfront elevation of the building a new four storey wing has been erected. This houses dressing rooms and a top floor (rooftop) cafe for the company.

The project has a number of sustainability credentials, not least the choice of materials used. “We used materials that were best for each section of project,” adds Mr Wylie. “A steel frame is lighter than alternatives for the new additions.”

The steel wing structure also includes a 10m long Vierendeel truss which picks up the rooftop cafe’s canopy. The truss weighs 10t and was brought to site in one piece and lifted into position by mobile crane.

On the town side of the building, another new four storey steel framed wing was also constructed. The lower level of this structure has a colonnade from the theatre’s new entrance, with a series of exposed feature steel columns.

Summing up, the judges say the complete remodeling of this iconic theatre and varied ancillary areas has been exceptionally challenging. The steelwork has been key to dealing with the varied major areas, with interesting interactions of structural materials. 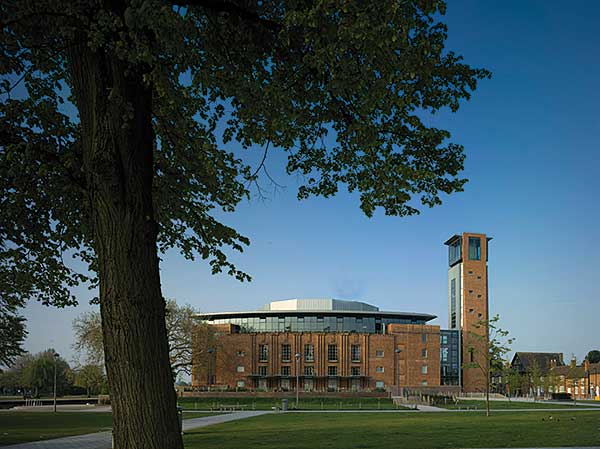