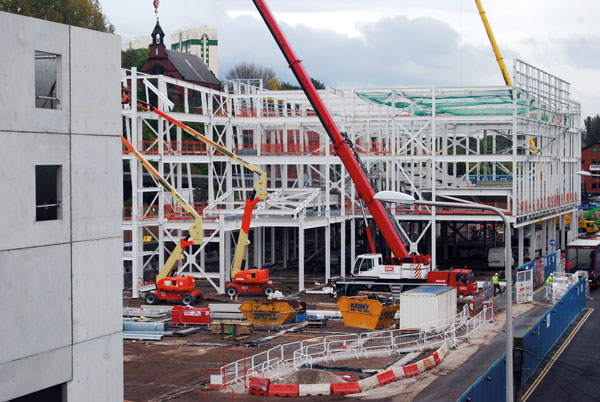 Steelwork erection began with the cinema

Structural steelwork is playing a central role in a large-scale regeneration programme that will further enhance Stockport as a popular destination for shoppers and businesses alike. Martin Cooper reports.

One of the largest of the ongoing projects is Redrock Stockport, a £45M leisure development that will transform an area in the heart of the town centre.

Main contractor Wates Construction began its 65-week construction programme last April, but prior to starting on-site a value engineering exercise was carried out to refine the project’s steel design.

Structural steelwork is playing a leading role in the development as both of the main structures – cinema and car park – are steel-framed.

The biggest refinement to the steel design was the alteration of the design of the multi-storey car park.

“We decided to change its design to a Vertical Circulation Module (VCM) car park as this required less steel, which saved money, and gave us more parking spaces – 364 instead of 340,” explains Wates Construction Project Director Paul Harris.

Hill Cannon, the structural engineer that originally patented the VCM system was contracted to design the car park.

“VCM’s are ideal for tight confined inner city plots like the Redrock site,” explains Hill Cannon Project Engineer Steve Vollar. “There are no external ramps between floors as all of the circulation is via slopes within the floors and this creates more parking spaces.”

The VCM incorporates a composite design with steelwork supporting pre-stressed hollowcore precast planks with a structural topping laid on top of this.

Steelwork for the car park consists of perimeter columns spaced at 7.5m centres, allowing enough room for three parking bays between columns, with internal columns creating spans of 15.8m, which accommodates two rows of bays and a central vehicular route.

The four level VCM car park is sat above a ground floor retail level, which has a generous 7m-high floor-to-ceiling height. This will allow retail or restaurant outlets the option to install a mezzanine level during their fit-out programme.

Because of this ground level retail zone, the new car park will be accessed from road level via a steel-framed spiral ramp located on the opposite side of the road. This will then link to a steel bridge that will carry vehicles back across the road and into level one of the VCM car park. Another adjacent bridge will connect the new car park to Stockport town centre’s existing car park that spreads out over the roofs of several store buildings.

The spiral ramp has been designed as a series of portalised frames perpendicular to the curve, supporting precast units to avoid the need for formwork.

The car bridge has two intermediate feature piers, formed by pairs of braced 457mm CHS columns, creating one 28m-long span and a second 20m-long span. This 9m-wide bridge will be formed by a pair of plate girders, each measuring up to 1.5m deep.

Structural design of the ramp, bridges and the cinema block is being carried out by BDP and its Project Engineer Kieran Geoghegan says: “Steelwork was the preferred frame material throughout because of the rapid construction programme and the ease at which it could achieve the various long spans, despite the significant cinema acoustic build-ups and onerous accidental loading on the bridge.” 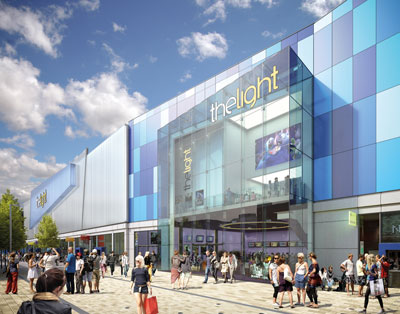 The cinema structure is over 120m-long and consequently a thermal movement joint is created by a double row of columns.

Overall the steel grid pattern for this building is quite irregular because of the differing sizes of the first floor cinema auditoria.”

The cinema is a large braced frame, with some sway frames located in the ground floor area where large glazed areas prevented the installation of bracing. Bracing was easier to install within the cinema due to the lack of windows.

Sitting above a ground floor retail area, also featuring a high floor-to-ceiling height to potentially accommodate mezzanine floors if required by the tenants, there are 10 cinema auditoria with the largest screen measuring 23m × 17m. The auditoria above influenced the ground floor steel grid pattern as did the need to provide large versatile commercial units with spans of up to 12m.

Locating screens on the upper floors in close proximity to each other meant acoustics was an important issue during the design stage. In order to isolate each seating terrace, acoustic bearings have been positioned between the first floor structure and raked steelwork supporting the seating.

BDP Acoustic Consultant Joseph Hardy says: “One advantage of using a steel frame and precast concrete terrace design, instead of a timber frame design, is that the natural frequency requirements of the terrace acoustic isolators can be achieved under dead load without having to prestress the pads, to avoid large deflections under live load.”

Overall the cinema block is 20m-high including parapets which shield the building’s rooftop plant areas. The structure has a sloping façade along its elevation overlooking the busy M60 and this architectural feature acts as a signpost to the development.

The five degree sloping façade has been formed by additional steelwork bolted to the main frame. This consists of Metsec cold-formed horizontal side rails spanning between the inclined posts.

Steelwork contractor Billington Structures began the erection process with the cinema block and gradually worked westwards along the site finishing the steel programme with the car park, ramp and bridges during December.

As well as the steel erection, Billington was also responsible for the installation of precast planks in the car park, and metal decking and precast terrace units in the cinema building. The company also installed the project’s two precast lift cores, one in the car park and the other in the cinema.

Redrock Stockport is scheduled to open in November 2017. 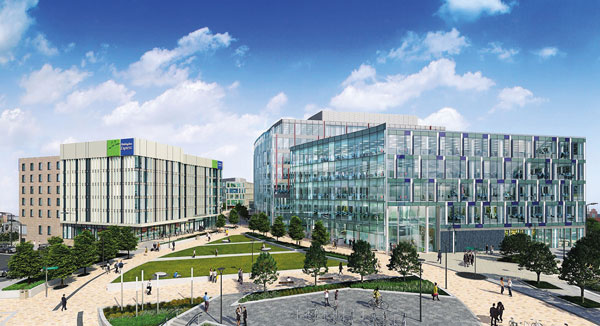 Known as the Stockport Exchange, the £145M scheme will create a new gateway for Stockport town centre and consists of a four-storey steel-framed office block erected by Billington Structures working on behalf of Eric Wright Construction, and a 115-bed steel-framed hotel.