Retail development checks out with steel

Visualisation of the completed park

Steelwork’s speed of construction has played a significant role in the building of a new retail park in Rugby, scheduled to open in September less than one year after work began.

This ideal location for a retail development is best summed up by the fact that it was 100% pre-let ten months prior to its earmarked opening this coming September.

The park is a central part of the fourth phase of works at St. Modwen’s 70-acre regeneration scheme on Leicester Road, and will complement the existing offer at the Junction 1 Retail Park and support the on-going regeneration of the area.

St. Modwen Senior Development Surveyor Peter Rudd says: “We secured a great tenant line-up prior to starting on site, which demonstrates the demand for units of this size and the strength of the site’s location. The new Technology Retail Park will play a central part of our new multi-million pound urban community and is great news for shoppers and the local economy.”

The 10,200m² retail park has secured lettings from major retailers Homebase, Wickes, Pets at Home and Bensons For Beds. 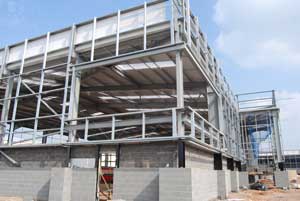 The Homebase store under construction

The floor areas include first floor mezzanine space that is included in the two largest units occupied by Homebase and Wickes. Both mezzanines are approximately 8m wide and extend the full length of both structures. They will accommodate offices, staff rooms and toilets.

According to Rowntree Partnership Project Engineer Paul Preston, the design of the project was always going to be a steel-framed solution, with the main driver being speed of programme.

“Steel is the best and quickest way of constructing buildings with long clear spans, which is what we have here.”

Speed of programme has been key to this job as the retail park is earmarked to opening this coming September. 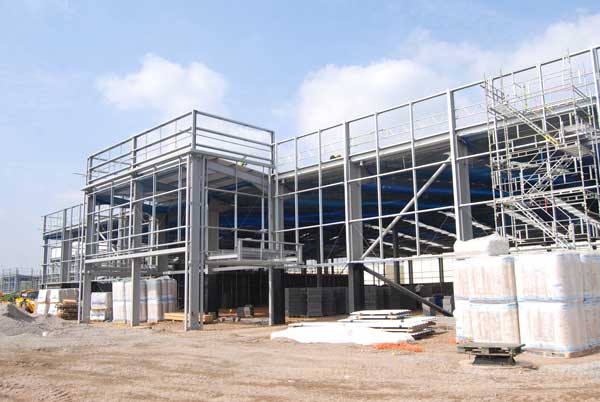 Each store has a connected steel-framed entrance pod

“We started onsite last October with less than one year to complete the project,” Paul Limbrick, Barnwood Construction Site Manager, says. “The steel erection programme then started in January and was completed by early April which helped with keeping us on schedule.”

Three of the units, occupied by Homebase, Pets at Home and Bensons, are joined together and form one large structure that has been divided into three stores by two internal column lines supporting partition walls.

The Homebase unit is a 56m wide propped portal framed structure, while the adjoining stores are slightly smaller and feature just a single spliced 35m wide span with no internal columns.Stability for all of the units is provided by a combination of portal action and strategically positioned cross bracing. 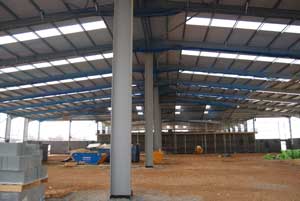 Although the three units are all connected, the two smaller units are structurally independent and would stand up if the larger Homebase unit was not there.

The Wickes unit is a stand-alone structure separated from the other units by a car park. Similar in design to its neighbours, this structure is a single 30m wide portal frame. Like the other units, cross bracing positioned in the portalised bays provides stability.

“There is a fair amount of complexity in all of the unit’s hipped roofs and connecting parapets,” adds Mr Preston. “There is also a lot of cold rolled steel all around the structures from 2.5m above ground level upwards.”

During the steel erection programme, steelwork contractor Adstone Construction had a large part of the site to itself. Working in a sequential manner and using one mobile crane Adstone, following on behind the piling and groundworks teams, initially erected the Homebase unit and its two smaller connected neighbours.

The steel erection programme was then wrapped up with the completion of the Wickes unit that is positioned at the opposite end of the site.

Cladding of the structures was completed during May, and Barnwood Construction has now begun the fit-out programme and the final elements of landscaping, paving and tarmacing of the external areas of the site, in readiness for the opening date.

St. Modwen’s Technology Retail Park is situated on Technology Drive, which is within two miles of the M6 motorway and is close to existing shops, services and Rugby railway station. It is also minutes from the £35M Warwickshire College, which was constructed by St. Modwen and opened in 2010.