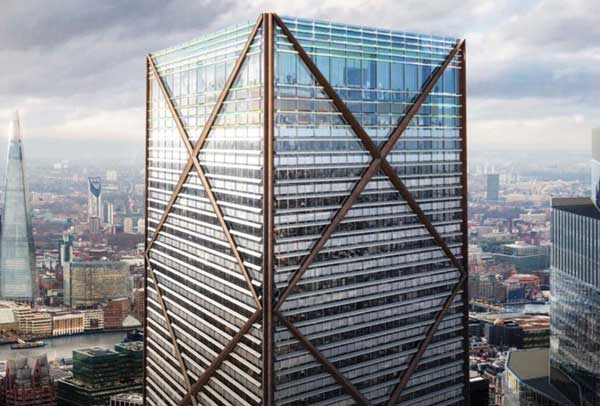 The City of London’s skyline could be radically altered yet again as plans for a 309.6m-tall tower have been submitted for planning approval.

The new tower will be the same height as The Shard – Europe’s tallest building, which stands just across the river in Southwark.

Designs from Eric Parry architects plan the demolition of the headquarters of insurance giant Aviva to make way for a 73-storey steel-framed tower at 1 Undershaft.

The 90,000m² building would be able to accommodate 10,000 people and boast a viewing platform higher than that of The Shard, and London’s highest public sky restaurant.

A conceptual design by Avery Associates for the previous owner of the 1 Undershaft site proposed an angular sloping sided glass tower peaking at 270m, a design that led to it being dubbed “The Fang”.

It would stand 28m higher than the replacement steel-framed tower for the Pinnacle scheme at 22 Bishopsgate that could now only temporarily become the City’s tallest building when it completes in 2019.

Both of these buildings will loom above a number of recent City skyscrapers, including the Leadenhall Building (Cheesegrater) and 20 Fenchurch Street (Walkie Talkie).

London currently has only 15 towers over 150m, lagging behind New York that has 188 and Hong Kong, the high-rise world champion with 302.