An education in steel

A design change has resulted in Rhyl New School being constructed with structural steelwork, resulting in a more cost-effective programme.

Denbighshire County Council and the Welsh Government, through its 21st Century Schools and Education Capital Programme, are jointly funding the project which is aiming to achieve a BREEAM ‘Excellent’ rating.

The new steel-framed building is being constructed on land previously occupied by the school’s sports fields. Once the new school opens its doors to students in 2016, the existing buildings will be demolished, making way for new playing fields.

The new 10,000m² school will accommodate 1,200 pupils, as well as providing a base for 45 pupils from the nearby community special school, Ysgol Tir Morfa. As well as modern classrooms, laboratories and workshops, the new building will also include a performance studio and specialist areas for use by the local community.

Cabinet Lead Member for Education Councillor Eryl Williams says: “The new school is great news for future generations of pupils, as well as the continued regeneration of Rhyl.

“The state-of-the-art facilities that will be provided in the new school demonstrates the council’s continued commitment to providing the best possible start for our children and young people in modern surroundings”.

Minister for Education and Skills, Huw Lewis said: “This significant investment in Rhyl New School is fantastic for future generations of pupils, staff and the wider community. 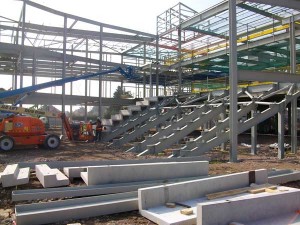 Steel rakers form the seating areas for the drama hall

“Our 21st Century Schools programme is a real statement of our belief in our young people. We are committed to providing them with the best possible opportunities to access the most up-to-date facilities which, in turn, will help them to realise their full potential”.

Main contractor Willmott Dixon started on site in October 2014 and its steel subcontractor EvadX, who are based in the town of Rhyl, were able to begin steel erection last February, completing the job in May.

“It’s great to be involved in such an important local project,” says EvadX Director Simon Adams. “I went to this school and so I can appreciate the benefits it will bring to the local community.”

As well as erecting the main steel frame for the three-storey school building, EvadX was also responsible for installing precast lift shafts and stairs, as well as supplying and installing metal decking.

Completing the structure’s frame so quickly was one of the main reasons structural steelwork was chosen for this job. However, steel was not the original choice for this project, as a concrete-framed building was initially envisaged.

Willmott Dixon was signed up more than four years ago to lead the design for Denbighshire County Council.

But when the project became entangled in the Welsh 21st Century school building spending review a long delay ensued.

During the hiatus leading up to construction actually getting under way, the project was subject to a redesign and a steel framed structure emerged as a more cost-efficient solution.

“The school was completely redesigned and is now a totally different building,” explains Ramboll Associate John Whitfield. “The old design included a sports hall on the ground floor and this has been omitted as it isn’t needed. A nearby leisure centre is now being refurbished as part of the project.”

The overall footprint of the school structure is rectangular with a slightly skewed in plan covered street dividing the building in half. Footbridges span this open void and link the building above ground floor level. 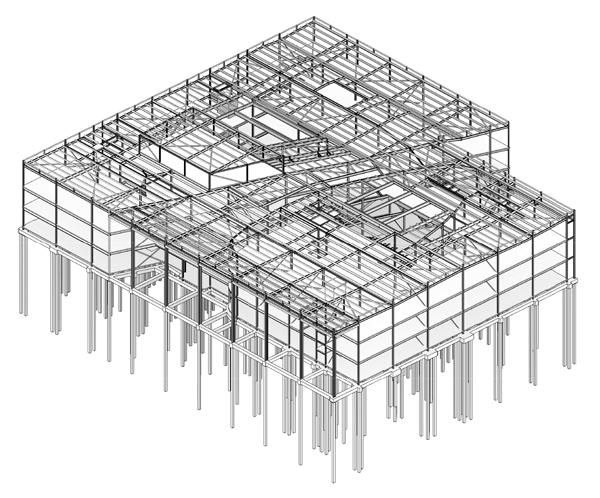 Steel model showing the school and its dividing street

Both halves of the building are braced frames and each one has been designed to be structurally independent. Stability is provided by strategically positioned diagonal bracing which is mostly located in and around the stair cores.

Because of the lack of areas in which to put bracing, Ramboll came up with the idea of utilising the performance space’s seating steelwork for extra stability. The auditorium’s terraced seating is formed with steel rakers and these have been designed as bracing members.

The majority of the steel frame has been erected around a standard 7.5m grid pattern, which is ideal for standard classrooms. There are some longer spans, up to 13m in length, forming the roof over the central ‘street’, the performance area and the dining hall.

Using two mobile cranes, EvadX erected the steel in a phased progamme that allowed follow-on trades to begin their work as soon as possible.

“We erected levels one and two, including the metal decking, before beginning the steelwork for the two uppermost floors,” explains EvadX Project Manager Steve Morris. “This allowed the concrete contractor to begin the lower slabs while we were erecting floors three and four.”

EvadX has also installed the precast terrace units for the performance space, a feature steel spiral staircase for the entrance foyer and hot-rolled framing for all of the building’s windows.

The design decision to go for a hot-rolled system for the window framing, instead of a traditional cold-rolled system, was another example of steel’s all-important speed of construction, as it was quicker to install.