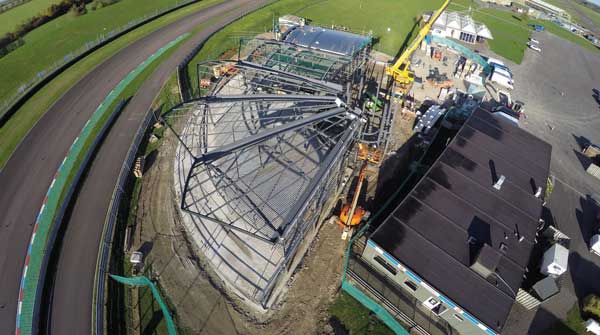 The racing day experience at Hampshire’s Thruxton Circuit has been enhanced by a new £1.5M steel-framed hospitality suite.

Featuring an innovative design, which fully utilises steelwork’s aesthetic qualities by leaving the majority of the framing material exposed, it also includes a grand atrium and entrance lobby said to reflect the dynamism of motorsport as well as the circuit’s rich heritage.

Initially designed by architects Chapman Partnership, they and the client always envisaged the scheme being built as a steel-framed structure.

The building’s shape has two distinct conjoined parts, one curved and shaped like an open fan on plan, and the other a more traditional rectangle. Both parts are topped by a series of curved barrel-vaulted roofs, which cantilever over a balcony that wraps around the front of both parts and overlooks the racing circuit.

“We chose a steel frame for a combination of reasons. Our architectural intent was to emphasis the high-tech nature of motorsport in the building’s design. The steel frame facilitated the complex roof geometry and cantilevers that echo the famous curves of Thruxton’s iconic circuit,” says Zac Chapman of Chapman Partnership. 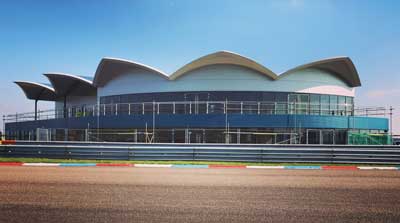 The hospitality suite is part of a larger redevelopment at Thruxton 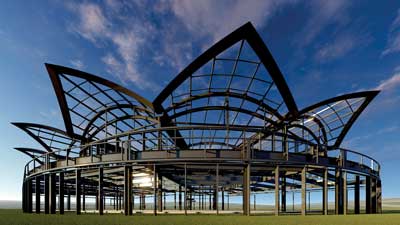 The barrel-vaulted roof cantilevers over the balcony 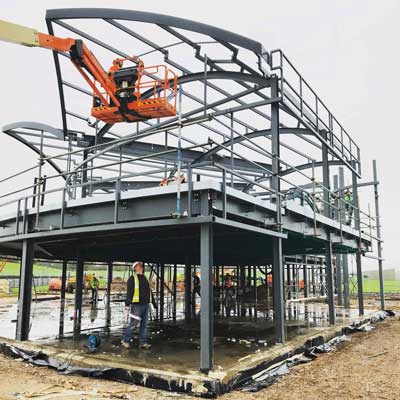 “The ability for large internal spans and resulting lack of columns made the project viable for a variety of programmatic criteria. Since the construction phase was restricted to the motor racing off-season [September to April], the pace of steel frame construction was another factor instrumental in its selection and ultimately vital in the project’s successful completion.

“REIDsteel’s early involvement and our regular design team meetings have resulted in an excellent final design, full of architectural and engineering merits.”

Working on a design and build contract for the project’s steelwork, cladding and glazing, REIDsteel helped to rationalise the design by working collaboratively with the rest of the design team to ensure they had a steel frame that could be built easily on-site.

“We made a number of refinements to the steelwork,” explains REIDsteel Structural Engineer John Harrison. “Most notably, omitting some large roof beams and introducing cantilevering purlins instead.”

“As the purlins are hidden in the sheeting, it gives the illusion of no roof support for the cantilever, as well as being a more cost-effective design.”

After being value-engineered, the design still retained many of the architect’s original concepts, such as keeping as much of the steel frame as visible as possible.

According to REIDsteel it was also important to keep the design as modern-looking as possible and so all of the main columns and beams are box sections, as they are said to have a more aesthetic appearance.

Steelwork for the 1,415m² hospitality centre is based around a regular grid, albeit one that radiates inwards around a constant radius on one side of the structure to form the fan-like area.

To form the roof of the fan, four rafters splay out from a central point, supporting the curved members that form the barrel-vault.

The structure has minimal internal columns, creating open-plan areas and maximum flexibility, with spans generally up to 10.5m-long.

Stability for the structure is provided by semi-continuous frames for the ground floor, while the first floor is a mix of portalised and tied barrel roofs.

“The requirement to keep the steelwork exposed within the completed building dictated the stability system we chose for each floor,” explains Mr Harrison.

The upper level has a lot of glazing and so an unobtrusive portal frame was deemed to be the most effective method.

The hospitality suite will be able to host up to 400 guests over two floors, with extra capacity available outside on the balcony.

The balcony is 3.5m-wide along the curved part of the building, but increases in depth to 6.7m along the straight part of the structure. Temporary grandstands could be erected along this wider floorspace, helping the complex to add to its capacity.

The wider part of the balcony can also be used to exhibit cars during launch events. To enable vehicles to be lifted on to the balcony the steel balustrade is removable.

At the rear of the building, positioned at the point where the curved fan-like part connects to the rectangular part of the building, there is an 8m-diameter round turret that contains the main staircase.

The staircase is attached to the roof of the turret via a series of Macalloy rods. Because the stairs also provide a fire escape route, the rods are deemed to not offer enough support so the staircase also cantilevers off the side of the turret.

The turret is a facetted circle formed with 16 straight sides. This negated the need for more expensive curved members and made the installation of the glazing easier, as curved glazing panels are also expensive.

Mr Harrison says: “Thruxton wanted an innovative and modern hospitality centre to reflect its status as one of the most iconic racing venues in the UK.

“Having designed, manufactured and supplied stadia for a wide range of clients, we are delighted to have delivered this landmark project which will support the venue’s growth for years to come.”

Summing up, Marketing Manager at Thruxton Ben Norton says: “Our flagship hospitality centre is the latest addition as part of ambitious modernisation and growth plans in our 50th anniversary year.

“It is an exciting development which will allow us to deliver stunning and memorable events for groups of all sizes with hospitality of the highest standard.”