The new pavilion has 2,660 seats, 11 hospitality suites, and players’ and officials’ facilities

Glamorgan cricket’s headquarters in Cardiff has been completely redeveloped and the new 16,000 capacity stadium, which officially opened for this Summer’s season, will also host the first npower Test of the 2009 Ashes series.

Next year’s eagerly anticipated Ashes Test series between England and Australia will kick-off at the redeveloped SWALEC Stadium in Cardiff. This will be the first Test match to take place in the Welsh capital and the first time an Ashes Test has been played outside England or Australia.

The decision to host an Ashes Test match in Cardiff was taken in 2006, but final confirmation was dependent on a full-scale redevelopment taking place and, most importantly, being completed.

Formerly known as Sophia Gardens, the stadium has been the home of Glamorgan County Cricket Club since 1967 and was used as a venue during the 1999 Cricket World Cup. 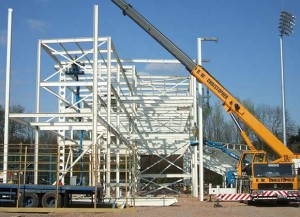 However, in order to become a recognised Test venue the stadium had to increase its seated capacity and redevelopment work started on site in early 2007, with the entire stadium completed in March this year, in time for this summer’s season.

The majority of the existing stands and terraced areas were demolished, with only a small section of terracing backing on to the River Taff and the National Cricket Centre being left undeveloped.

Main contractor Carillion was responsible for demolition, piling and all groundworks, and the entire project was undertaken sequentially in order to cause minimal damage to the pitch and also to allow the ground to remain partially open for a few county matches during the 2007 season.

Steelwork contractor Rowecord Engineering began erecting steel in March 2007 and had finished all of its work by September.

Rowecord’s Contracts Manager Colin Davies, says special care was taken in sensitive areas such as the protection of established trees along the River Taff frontage, and protection of the grassed cricket playing surface.

“Behind the Riverside Stand extra care was taken not to damage the established trees which overhang the terracing. Our access to the work areas was also restricted because we could not encroach on the playing surface and our deliveries of steel and precast concrete sections, and the positioning of our cranes and elevated working platforms were coordinated to use the limited space available.”

The redevelopment work was architect led and the vision was to create a bowl within the available space. All the new structures are linked, although many are still structurally independent. 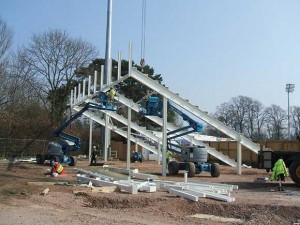 All stands were constructed as A-frames with sloping rakers, which is typical stadium construction

Matthew Evans, Arup’s Project Engineer, says the plan was also to give the stadium a park-like feel and the retained and protected trees along the river frontage perfectly fit this requirement.

Referring to construction design, he adds: “All stands are constructed as an A-frame with long sloping rakers, and have additional bracing for stability. This is typical for sports stadium construction and all of these stands are designed to accommodate the effects of crowd loading.”

Steelwork erection began with the North West Stand/ Pavilion adjacent to the existing River Taff terrace. The new Pavilion – sponsored by The Really Welsh Company – has 2,660 permanent sears and occupies the land between the National Cricket Centre and the site of the previous scoreboard.

The Pavilion is the centre piece of the new redeveloped stadium and features the Museum of Welsh Cricket (due to open in March 2009) on the ground floor; 11 hospitality suites and a business club on the first floor; and changing rooms, officials and umpires rooms, players dining room and a members area on the upper second floor.

The Pavilion structure is 112m long and 27m wide and required approximately 185t of structural steelwork.

When Rowecord began its work Carillion had already started to prepare the groundwork in advance, and cast in the holding bolts ready to accept the steelwork’s columns.

Carillion worked ahead of Rowecord by demolishing, clearing the ground and preparing the ground before steelwork erection could begin. “This sequence of build was started from the furthermost point from the Entrance Stand, working back toward the entrance from two directions in a pincer movement,” explains Mr Davies.

Rowecord’s contract also included the installation of all precast concrete terrace planks. “We needed to erect the structural steel in a number of bays to within the cranes working capacity, then line and level the structure and harden all construction bolts. Only then could the precast units be loaded and fixed. This operation was then repeated throughout the build,” adds Mr Davies.

Once the Pavilion had been erected Rowecord moved to the other side of the existing River Taff terracing to erect the Riverside Stand. This single storey terrace is 70m-long and has 674 seats. A new electronic scoreboard and groundstaff building has been built at the rear of this stand.

The new main Grandstand was by the largest steel structure erected during the programme and required 265t of steel. The new structure has been built on the site of the former pavilion, erected in 1967 following Glamorgan County Cricket Club’s move to the stadium from the nearby Arms Park. 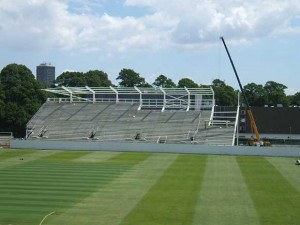 The Grandstand has over 4,864 permanent seats arranged along one level. The structure is 91m long and is topped with a 9m cantilevered roof which is clad with a stretched canvas membrane.

“The entire job was done with piece-small sections, with 14m long columns being the largest members,” explains Mr Davies. “On the Grandstand the most exacting work was to make sure the connections were correct for the roof’s cladding.”

The final pieces of the jigsaw were the Cathedral Road Stand and the Entrance/Corner Stand. The 77m-long stand at the Cathedral Road end has 3,494 seats on the lower level, with a state-of-the-art media centre above, containing four broadcasting boxes for radio stations and three television studios, plus a tiered seating area for more than 100 journalists. The structure is 51m-long, has a 9m cantilevered roof and needed some 250t of structural steelwork.

“We built our way around the pitch from the River Taff terracing in both directions and on completing the Entrance Stand, which was the last structure to be erected, backed ourselves out of the ground,” adds Mr Davies.

The Entrance has been built on the site of former hospitality suites and contains more than 2,000 seats. At the rear of the stand, there will be a cricket shop, plus a turnstile complex, with a tented entrance canopy adjacent to some existing and retained gates.

The completely redeveloped SWALEC stadium opened for the new cricket season and in preparation for next year’s Ashes Test it will host a One-day International between England and South Africa on 3 September.