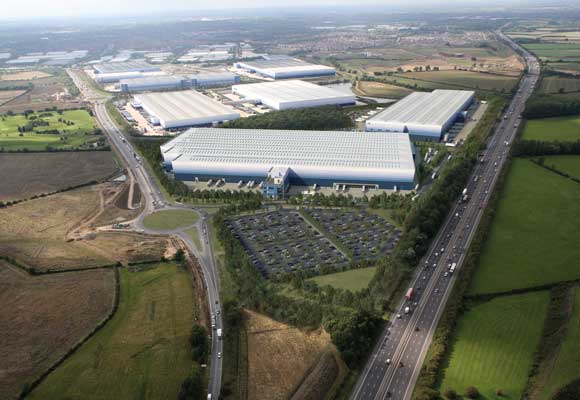 Magna Park is forging ahead with its expansion plans as the latest steel-framed distribution centre, offering 72,000m² of floor space, nears completion.

FACT FILE
Magna Park Plot 520, Milton Keynes
Main client: Gazeley
Architect: Chetwood
Main contractor: VolkerFitzpatrick
Structural engineer: Hydrock
Steelwork contractor: Severfield
Steel tonnage: 3,000tSituated between junctions 13 and 14 on the M1, Magna Park, Milton Keynes is said to be a strategically located distribution park that is within a 4.5-hour HGV drive of 54.8M people in the UK, which is 85% of the British population.

According to the site’s developer Gazeley, it also benefits from a strong labour force, with 932,000 working age people living within a 30-minute drive.

The development is an established location for logistics, home to the distribution operations of some of the UK’s largest and most successful brands including John Lewis, River Island, Waitrose, Barr soft drinks and UK Mail.

Unsurprisingly, steel construction – which accounts for over 90% of the UK shed market – has played an important role in the development of the site as all of the Park’s distribution centres are steel-framed structures.

According to Severfield Operations Manager Stephen Jay-Hanmer, his company has had a long relationship with Magna Park as it has erected seven previous buildings on the site prior to starting on Plot 510 (see box) and then the larger Plot 520. 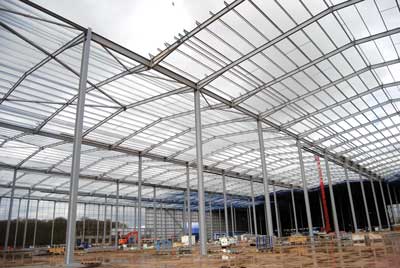 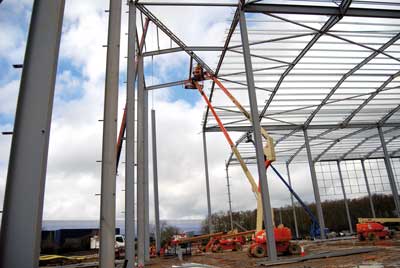 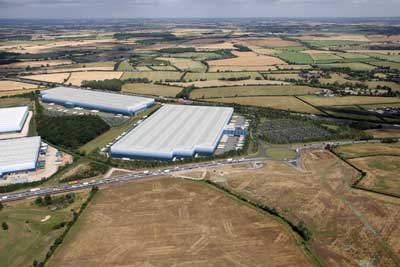 Once 520 is complete further distribution centres are planned

Main contractor VolkerFitzpatrick began work on Plot 520 in December 2017 and started by installing pad foundations in readiness for the steel package.

Speed is of the essence for all construction projects, but possibly more so with distribution centres. From the moment, the main contractor starts on-site, its main objective is to get the frame up as quickly as possible.

“The weather hasn’t been great this winter but the steelwork has been unaffected by the wet and snowy conditions,” says VolkerFitzpatrick Project Manager Jon Evans. “The entire steel frame was up in just 10 weeks.”

The portal-framed structure has six spans, two at 37m and four at 31.5m.

To erect the frame Severfield used four mobile cranes and a workforce of 25. The erection method consisted of completing one row of bays across the whole width of the building before moving onto the next set of bays.

Soon after each row was complete they were handed over to the cladding team, who worked immediately behind the steel erectors. By working in this sequential manner, the frame was weathertight soon after the steel was completed.

The initial 200m-wide steelwork required a significant amount of temporary bracing to keep it stable during the erection process.

“Bearing in mind the structure is 20m-high and subject to quite considerable wind loads, we had to design a temporary bracing system for each of the span’s valley lines,” explains Severfield Design Manager Dan Dockerty.

Severfield used its own re-usable temporary bracing system, which was installed along with the main frame, and was then removed once the permanent stability system was installed.”

The building’s columns are 762 UBs along the perimeters, while internally the company has used plated columns. These members support the roof rafters which were all fabricated and delivered to site in two pieces (two 18.5m rafters for the 37m span and two 15.75m sections for the other spans).

Once the main warehouse structure was up, the final part of the steelwork package involved the erection of an attached three-storey office block. This building required approximately 260t of steel and is a traditional column and beam structure with composite metal deck floors.

At ground floor, the 54m-long office building bridges over a 16m-wide HGV route into the warehouse. To create this bridge, a series of plated girders is positioned at first floor over the thoroughfare.

Above the second floor level the building also features a plant deck and an outdoor terrace.

Plot 520 is scheduled for completion by September. 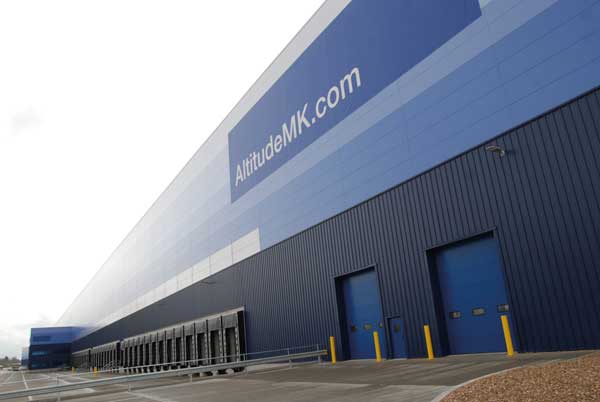 Working on behalf of Readie Construction, Severfield has also recently completed Magna Park Plot 510, a building that Gazeley claims is the tallest and largest speculative logistics warehouse in the UK.

Construction of the warehouse began in August 2017 and took 26 weeks to complete. Within that overall programme, the steelwork package, which comprised of 2,300t, was erected in six weeks.

Severfield Operations Manager Stephen Jay-Hanmer says: “We had two main erection teams working on the project, one starting at one end of the building and the other starting in the middle.

“Both worked in the same direction using four mobile cranes each and, due to our design and on-site expertise, the first team connected their final steel elements seamlessly to the parts that had already been erected.”

Severfield had 40 men on site to complete Plot 510, which included a third gang using a single crane to erect the warehouse’s office block and ancillary buildings.

The building is said to feature an innovative design which provides occupiers with the highest degree of operational flexibility and efficiency. Some of its features include: an enhanced mezzanine capacity and an increased number of pallet positions; double deck loading doors in every position, at a ratio of one door per 418m² – reducing time as well as financial and environmental operating costs for occupiers; an increased incoming power load provision of up to 4 MVA to cater for the evolving needs of customers, and designed to the WELL Ready Standard certification, which is said to make the building a healthier and more productive space for its occupants.

Commenting on the development, Gazeley Development Director Joe Garwood said: “Magna Park, Milton Keynes is already one of the UK’s most established hubs for logistics, and the development of Altitude will only serve to strengthen that position and appeal to occupiers as a leading location for ecommerce, logistics and distribution companies.

“Altitude brings together a combination of innovation, technology, efficiency, sustainability and intelligent logistical thinking from some of the most experienced figures in the business to create a building that sets a new benchmark for the industry.” 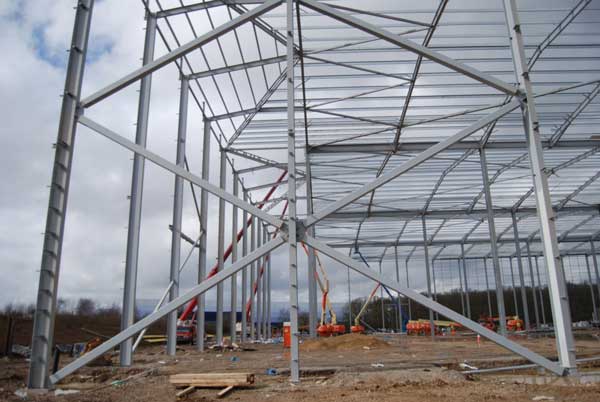 Plot 520 is 349m long with no expansion joints. Richard Henderson of the SCI discusses the implications

Plot 520 comprises 3 bays of 9.66m and 40 bays of 8.0m between the centres of the gable frames at the ends. A consideration of the possibility of leaking expansion joints in a portal frame with a clear height of 20 m and the associated commercial risks, resulted in a decision to design the building without joints. Three vertical panels of tubular bracing provide stability in the longitudinal direction and, because the structure is continuous, the braced panels inhibit free expansion due to temperature changes. The design of the building includes thermal load cases to take the thermal effects into account where they arise in the continuous members.

The internal temperature range recommended in the Steelwork Design Guide to BS5950 Volume 4 Essential data for designers (SCI publication P070) is -5 °C to +35 °C, a temperature range of ΔT ± 20 K. The coefficient of linear thermal expansion α = 12 × 10-6 K-1 so the maximum thermal strain αΔT is about 2.4 × 10-4. Depending on the position of the braced bays, expansion joints could be required to allow for movement of ± 40 mm; instead, the braced bays resist expansion of the continuous members between them, resulting in a maximum theoretical stress σ = EαΔT of about 50 MPa which would arise if the braced panels were perfectly rigid.

The building has six spans of portal frames across the width of the building totalling 200 m. The structural form of the portal frames means that thermal expansion in the plane of the frames results in an increase in the axial force in the rafters, accompanied by a rise in the apex of the frames. A reduction in temperature has the opposite effect.

The portal frames are designed as hit and miss with valley columns in alternate bays omitted and the rafters supported on valley beams. The five valley lines are stabilized by bracing in the plane of the roof leading to the vertical braced panels. The valley beams are substantial elements spanning 16 m or more which are present in continuous lines down the length of the building.

In practice, the braced panels have some flexibility and the longitudinal members (eg the valley beams) may have some movement capability in their end-connections as a result of the standard 2 mm oversize holes. The result is that thermal stresses are not as high in practice as the maximum theoretical values would suggest.