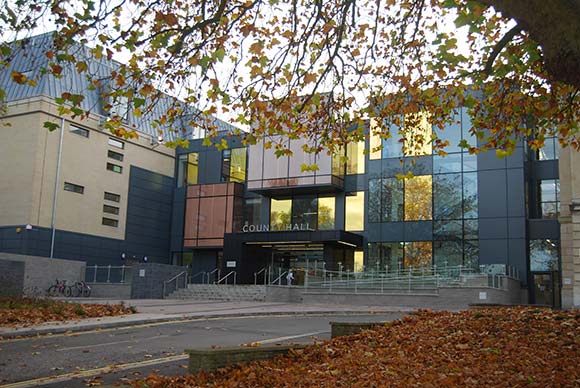 The centrepiece of the refurbishment of Wiltshire County Hall in Trowbridge is a multi functional atrium formed by roofing over a previously open courtyard.

Steel construction has played a major role in the modernisation and expansion of Wiltshire County Hall, a project that will help the County Council transform the way it delivers its services.

A £24M revamp will result in a larger more transparent and user friendly building, enabling the council to consolidate many services which are currently spread around the county town.

Being delivered in two phases by Kier Western, phase one of the project was officially opened in early November 2012. The major part of this phase involved enclosing a previously open courtyard situated between the County Hall’s two existing office blocks.

As well as providing a larger internal link between the council’s original 1930s Hall and its 1970s built extension, the work has also created a large covered zone that now houses a new entrance, reception and waiting area, and an indoor café.

“The idea was to change the perception of the County Hall by opening it up to the public,” explains David Miles, Stride Treglown Project Architect. “By creating the atrium with a café and new waiting area, the Hall is now more accessible and inclusive for the general public.

“Previously it wasn’t obvious where the main entrance was, but now it is and people have more reasons for entering the Hall.”

The local library is one of those reasons, as it has been relocated from other premises to the ground floor of the revamped 1970s built extension. Adjoining the new atrium, the library opens out into the new indoor space and forms part of this major refurbishment programme. 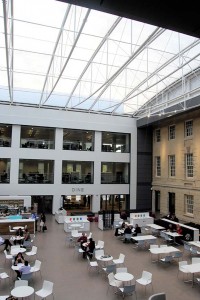 However, the most prominent eye catching part of the project, as well as the most visible, is the steelwork forming the atrium, or covered courtyard.

A series of nine 28m long tubular trusses, supporting a lightweight ETFE roof, create the bright and welcoming indoor space. Tubecon, a division of Billington Structures, fabricated, supplied and erected the trusses, while specialist subcontractors installed the ETFE to the steelwork.

Because of the length of the trusses, they could not be transported to site in one piece, so arrived in three sections.

These were then assembled and bolted into complete trusses on the ground, before being lifted into place by a mobile tower crane.

The most challenging part of the design for the steelwork was the number of interfaces which the roof trusses come into contact with. “Each of the four sides are different and the steelwork connections have to accept various constraints,” explains Grant Stratton, Integral Engineering Design Project Engineer.

The trusses span from the rear of the atrium, supported by the original extension’s concrete columns, to the new front entrance, where new steelwork takes on the supporting role.

Secondary steelwork links the trusses together, while brackets connect the roof structure to the eaves. Here the new roof has to connect to the masonry façade of the 1930s built Hall, while on the opposite elevation the steelwork joins to the steel frame of the 70s extension, albeit just below a mansard feature.

“Steel was the only solution for this part of the job,” adds Mr Miles. “It was a quick option, other materials such as concrete would have been too heavy and would have required a longer programme.

“The slender steel trusses are also a feature element, fully exposed and open to the public’s gaze. We wanted something that looks elegant and that’s what we’ve got.”

Originally the uncovered courtyard was enclosed on three sides by a steel framed extension. The front elevation, containing the main entrance, has been demolished, making way for a new three level steel framed façade and entrance.

Structurally independent – for ease of construction and to provide a movement joint in an otherwise long and unbroken structural elevation – the frame offers two levels of offices above the entrance.

The steel frame has cantilevering floorplates on the interior and exterior façades, and supports a glass tinted cladding that changes hue.

Also overlooking the new open space, the offices in the two remaining extension elevations have been renovated to create more open plan floorplates. Above the ground floor library, projecting bays overlooking the atrium have been added, formed by adding new steelwork to the existing frame.

Phase two of the project has now started and this involves the refurbishment of the main 1930s built County Hall structure.

This building consists of an inner steel framed structure, surrounded by four perimeter masonry elevations. Steel columns are being removed to create larger office spaces, while new steel is being added to form new risers and an escape stairway.

Phase two of the project is due to be completed in late 2013.