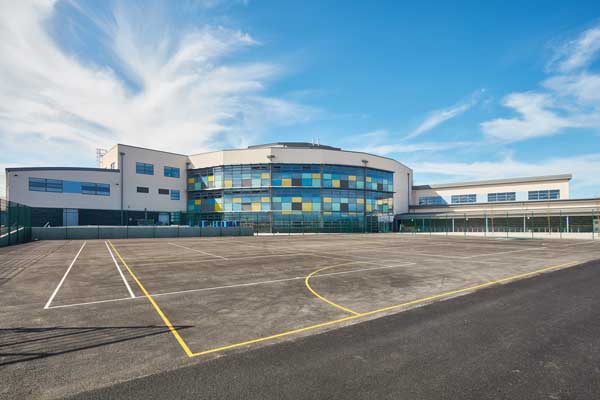 Holywell School in Flintshire, one of the first projects in Wales’ 21st Century Schools Programme (see NSC Feb 2016) has opened.

Requiring 700t of structural steelwork, erected by EvadX, the new building replaces the old High School, which is situated next door, and two local primary schools.

Main contractor Galliford Try began work on the project in January 2015 and it has now begun phase two of the scheme that consists of demolishing the old school buildings to create new sports pitches.

The new Holywell School has an elaborate design combining a three-storey secondary school with a single storey primary school both housed within two elliptical-shaped zones.

Apart from the sports hall, drama hall and dining areas, the entire school is curved both on plan and elevation.
The steel frame forms a stretched figure of eight shape with the primary school formed around an open elliptical-shaped courtyard in the top loop, and a three-storey atrium infilling the lower loop surrounded by the secondary school classrooms.