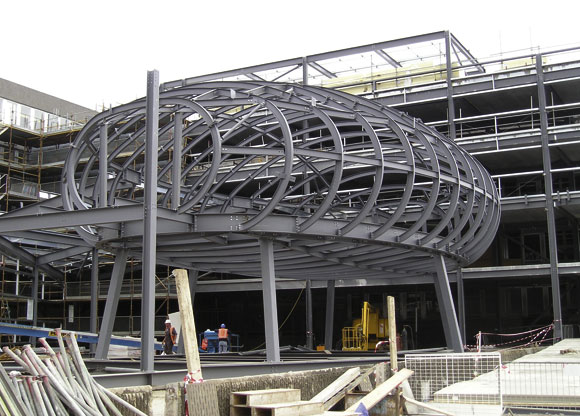 Constructing extensions to existing structures can take many forms, with the most popular being to tie in something similar to the original design. However, Renfrewshire Council has taken a slightly different approach for its headquarters extension in Paisley.

The building is steel-framed and attached to an older concrete building via three steel pedestrian bridges with the entire structure sitting on top of a concrete multi-storey carpark. It has five storeys and is a uniform 36m-long x 7m wide reaching an overall height of 16m.

Adding to the office space there is also, attached to the west elevation, a Customer Services annex which has a footprint of 32m x 29m and is a two-level building incorporating a mezzanine level.

It is this annex which contains the most distinctive and complex part of the scheme. Inside there is an egg-shaped debating chamber which is supported on six 250 x 250 x 10 SHS columns – giving it a floating effect – and attaches to the main building at second floor level. The ‘egg’, however, will be visible from outside as the steel-framed Customer Services building which wraps-around it will have a glazed cladding.

“Every one of the 178 UB curved members used on the egg was unique,” Mr Sanderson explains. Cairnhill used Barnshaw Section Benders to roll these members and, “this required some close cooperation,” he explains.

Kenny Stevenson, Associate Director of structural engineers Struer, agrees and says the 3D modelling of the ‘Egg’ was possibly the most challenging aspect of the project. “There were so many differing members,” he says.

The ‘Egg’ steelwork also consists of 533 UB main floor supports, 457 UB elliptical perimeter beams and 254 floor tie members. Its overall dimensions are 19m long, 13m wide and 9m tall, including the supporting legs. Once the steelwork is complete the ‘Egg’ will be clad in copper.

Space was at a premium on the site, which is why the structure utlises the top floor of the car park. “Using steel also meant less plant and equipment on an already tight site,” adds Mr Sanderson. As there was little space for materials to be stored at ground level all steel had to be immediately lifted up to the car park roof once it was delivered.

Building on top of the existing car park also meant the lower structure had to be fully surveyed to make sure it could actually carry the extra load.

Mr Stevenson says there was originally a landscaped area on the roof and consequently the car park was designed to carry an extra loading.

“However, the new council building is constructed on top of a steel transfer structure that takes the extra loads down into the existing concrete columns, which have also been strengthened with steel angles,” Mr Stevenson explains. The transfer frame sits within the raised floor which was originally the car park roof.

Steelwork on the building is now complete, and the main contractor is finishing fit-out. The headquarters extension is expected to be fully occupied by November 2007.