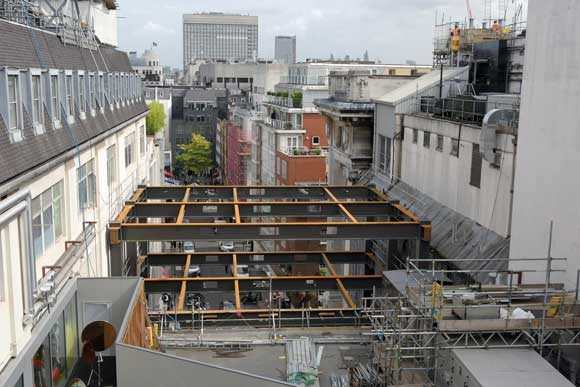 Steelwork has been erected while the store remains open

The scheme will provide better links between the famous 1909-built classical-style main building, which fronts Oxford Street, and a later extension to the rear, initially built in the 1930s and known as the SWOD building, after the Somerset, Wigmore, Orchard and Duke streets that used to surround it.

The revamp includes the construction of a new entrance on Duke Street, to cope with the footfall increase expected when the nearby Bond Street Crossrail station opens, as well as new retail floors above.

Interestingly, both of these Selfridges buildings are steel-framed, with the original store having the distinction of being one of London’s oldest steel-framed buildings.

Phase one of this ambitious scheme, which included the construction of a new loading bay egress ramp, was completed towards the end of 2016.

This initial phase was essentially an enabling works package, as once the store had its new ramp operational the old loading bay ramp along Duke Street, as well as the floors above, were demolished to make way for the more complex phase two to begin.

The phase two footprint is situated within an area previously occupied by Somerset Street, the thoroughfare that once separated the original Selfridges store from its later SWOD annex. 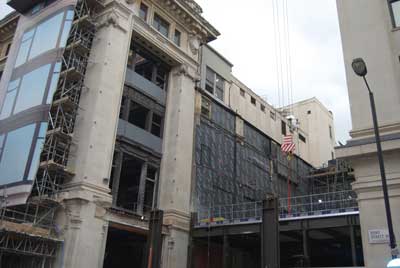 The confined site has room for only one tower crane 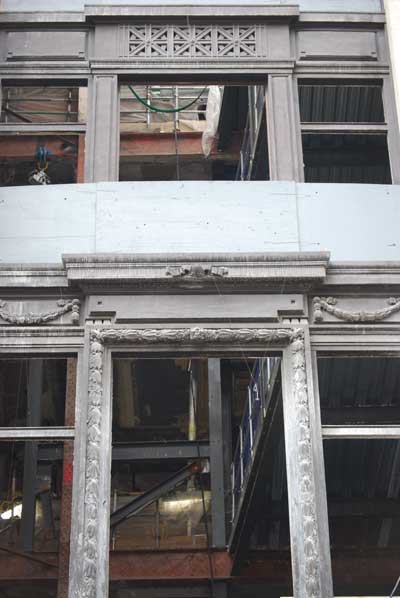 Numerous listed elements on Selfridges’ original building are being protected 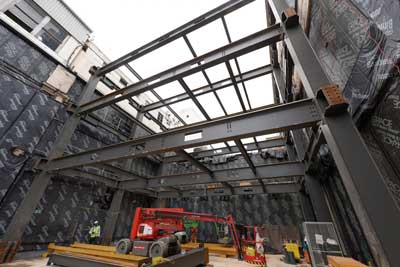 Larger retail areas and better links between buildings are being created

The road was purchased from Westminster Council in the late 1940s and consequently disappeared as new store buildings were constructed over it to link the two parts together. It is the eastern end of this zone, formerly containing a 1950s-built structure, that a new structurally independent steel frame is being erected.

There are five levels of existing structure either side of the new steel frame to be linked; lower ground, ground, first, second and third.

Although there are older steel-framed elements either side, phase two did not necessarily have to have the same framing solution. However, as the surrounding structures are historic and their capacity for additional loadings is limited, a stand-alone steel-framed solution was deemed the most appropriate solution.

The only exception to this structural independence is a new steel-framed lift and stair core, which has been carefully and meticulously inserted into an adjacent area of the 1909-built building and welded to the original steelwork.

“The best solution to create the entrance and the desired new flexible retail spaces in this area was an independent steel sway frame separated from the existing structures by movement joints,” explains Expedition Engineering Associate Director George Oates.

Steelwork’s comparative lightness to other framing solutions was also a reason for choosing this material. A light frame is essential for the project as the Post Office’s now redundant railway tunnel runs directly beneath the site.

“A heavier frame would have meant deeper piles and these would not have been viable because of the tunnel,” explains Mr Oates.

The design’s three-storey high Vierendeel sway frame does not need any internal bracing, which would have interfered with the open retail areas. The three upper floors consequently have 15m-wide spans with no internal columns and the supporting perimeter members are located as close to the adjacent existing columns as possible, thereby maximising available space.

Below the sway frame the supporting columns step in at ground floor and then again at lower ground to deliver loads into the ground away from the existing basement structures. To accommodate this column line change, a total of eight 1.2m-deep, 17t transfer beams have been installed; four on each level.

“But the desire to have flat links gave rise to one of our main challenges as at ground floor there is an area, towards the back of the site, known as the ‘bump’ where there are a couple of steps in the floor level due to the various construction phases that have taken place over the last 100 years.”

The ‘bump’ needed to be flattened and breaking out the old concrete to level the floor was straightforward enough, but that alone would have left seven existing steel columns too short to reach the ground. The solution was to insert a series of jacks that each supported three floors of structure while the work was done.

Once the concrete flooring was removed, new steel stubs measuring 1.5m-high were welded into place at the base of each column, making them the correct height for the new build. The structure was then de-jacked and the temporary works removed.

Another similar jacking process was also undertaken to remove two large masonry columns from the lower ground and ground floor levels. These two large elements were positioned either side of the new entrance area in the zone where the new build abuts the existing structures.

In order to create more space for customer flow, the columns were removed and replaced with much slimmer steel 305 columns.

“And to ensure the best possible finish, the correct tolerances and a quick installation programme, the steelwork is being erected fully encased in precast concrete.”

This has required steelwork contractor William Hare to liaise closely with the precast concrete contractor; delivering the steel sections to its plant and then taking delivery of members that are fully encased in precast concrete, ready to be taken to site and erected.

The front entrance bay includes a series of six slender T-sections that support a barrel-vaulted roof over a three-storey open area that extends upwards from first floor level as well as a glazed frontage.

The ability to bring steelwork to site in relatively small sizes has been a benefit to a project with no room for storage and only one tower crane for all lifting duties.

“Steelwork is prefabricated offsite and this was an important consideration for our design, especially the front bay,” sums up Mr Ewing.

“And importantly, all of the steelwork has been successfully installed without causing any interference to the store, which will remain open throughout the entire construction programme.”

Selfridges phase two is due to complete in mid-2018.