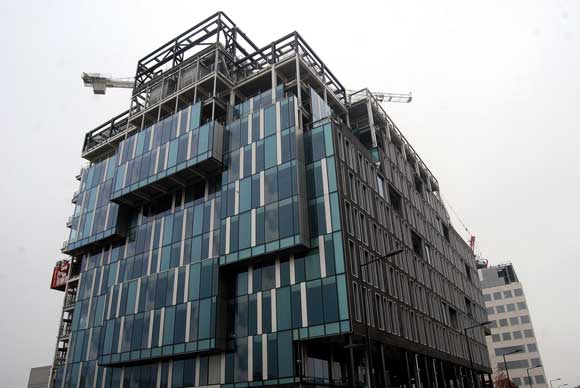 A steel-framed solution was the answer for the latest stand-out commercial development in London’s King’s Cross. Martin Cooper reports.

The King’s Cross redevelopment programme is radically changing a former run-down industrial site in central London into a vibrant business and residential neighbourhood.

Steel construction is playing a significant role within this development with a number of commercial and retail schemes having already made use of the material’s programme benefits.

Building S2 has reaped the rewards of a design change from a post-tensioned concrete frame to a steel frame. The initial design had the building based around a fairly tight structural grid, which was later deemed to be too constrained with too many internal columns for modern office requirements.

“The design was changed to a steel solution because the material offered a more economical method to achieve the desired spans and service integration,” explains Ramboll Engineer James Clay. 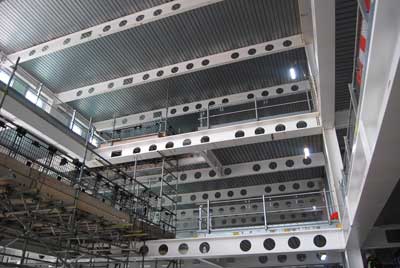 Two atriums are positioned either side of the core 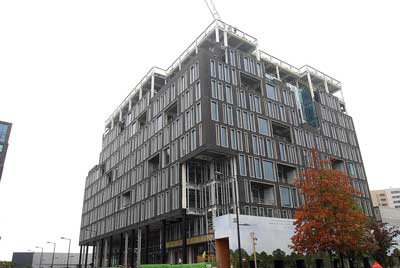 Another benefit of steel from a design perspective was in framing the numerous architectural set-backs and cantilevers, primarily the west façade, south set-back terraces and a south-east cantilevered corner.

Steel allowed the project team to hang parts of the floorplate and transfer other areas without impacting on the floor-to-ceiling height or raised access floor zone, which would not have been possible in post-tensioned concrete.

Sat atop a concrete basement sub-structure, the building’s steel frame starts at ground floor level and is based around a 12m × 12m grid with structural stability derived from a centrally positioned concrete core.

Fabsec cellular beams have been used throughout to accommodate ductwork and services, and these members also support metal decking and a concrete composite flooring system.

As well as accommodating the services within their depth, and consequently maximising the building’s floor-to-ceiling heights, the cellular beams will also be left exposed within the completed project, giving the tenant its desired raw, modern industrial-like environment.

The ground floor of S2 is a double-height space containing the main entrance lobby, restaurants and retail units. Above, the first floor has a cut-out area that overlooks the entrance. From the first floor to the ninth level, the floors are fairly repetitive with only a single row of internal columns disrupting the open-plan space.

However, breaking up the regimentation in the floorplates are two atriums positioned on either side of the core. On the eastern side of the building one atrium starts at level four and extends upwards to the underside of level six. The fifth floor overlooks the atrium and wraps around the inside of the void. On the opposite side of the building, another taller atrium begins at fifth floor and extends upwards to the underside of level eight. Within this void, floors six and seven overlook and wrap around the inside.

Having two large atriums may be to the liking of the building’s imminent tenant, but possible future occupiers could have different ideas and needs.

In order to give the building maximum future flexibility, the atriums can be covered over to create more office space, as Severfield Project Manager Kyle Fletcher explains. “We’ve installed extra beams within the frame, adjacent to the voids. They currently perform no structural duties, but if needed they can be unbolted from their locations and installed across the atriums.”

Prior to installing these extra beams, Severfield undertook a trial erection to make sure the steelwork fitted and could span the atriums.

The trial and the entire steelwork erection programme was carried out using the site’s two tower cranes. The only exception being a couple of 7t beams needed for the upper office levels.

Too heavy for the tower cranes, they needed to be installed by a large mobile crane, which required a Saturday morning partial road closure of Handyside Street.

The building is topped by a generous landscaped roof terrace which is known as level 11. A step in the floor separates this area from a plant zone, which is called level 10. More plant is located on floor 12, which is a steel-framed deck set back from levels 11 and 10 and occupying approximately one third of the building’s footprint.

S2 is the first part of a two-building scheme, with the adjacent Building S1 having recently gained planning approval.
Buildings S1 and S2 will be linked stylistically according to the project architect Michel Mossessian.

“S1, like S2 will be clad in a textured black stone that frames the buildings, forming the mass, and contrasting strongly with the light of the white ‘cavities’ in the façade. These cavities frame the windows and connect the buildings to the exterior space, highlighting the connection to the public realm.”

The space between the two buildings will form a dramatic sculptural void and act as a passageway, leading to a new public square that will be home to some distinctive restaurants.

“The key is to acknowledge that there is a fine line between public, curated and private tenants’ realm, from the ground up to the rooftops of the buildings,” adds Mr Mossessian. “This is what really makes the spaces hang together and generate a strong and engaging urban and spatial character for users.”

Building S2 is due to complete this summer.