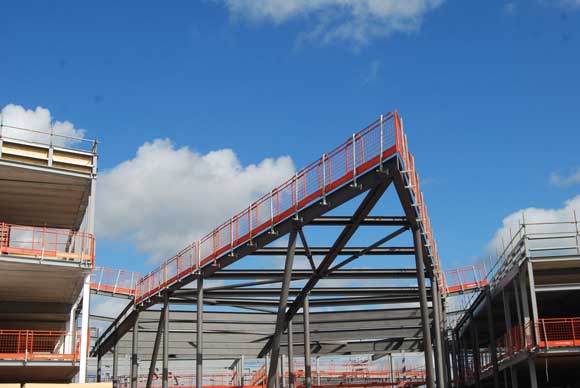 The entrance area culminates in a beak-like feature element

Steelwork’s speed of construction and flexibility have both come to the fore on an education project in Cumbria.

The project, which is due for completion in August 2019, has a £28M value and has been funded by investment from a range of partners, including Copeland Community Fund, Cumbria County Council, the Nuclear Decommissioning Authority and Sellafield Ltd.

“This remarkable project has incredible potential to transform the education of young people in Whitehaven and improve the health and wellbeing of the whole community,” says Cabinet Member for Economic Development and Property Councillor David Southward.

As well as an indoor sports hall, fitness suite and a hydrotherapy pool, a range of outdoor facilities will be available to the local community during non-school hours. These include multi-use sports pitches, one of which will have an all-weather 4G surface.

Main contractor Wates Construction started on-site during May 2017 and, after some earthworks to prepare the former sports pitches in readiness for the construction works, foundations were installed which then allowed steelwork erection to begin in June. 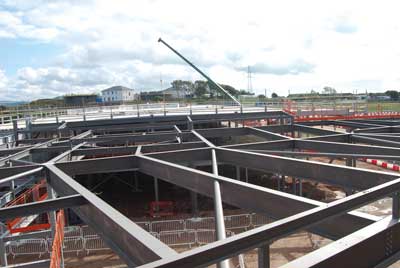 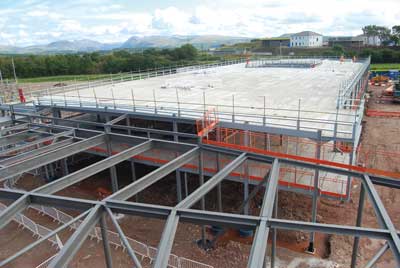 The lower two-storey wing will house the SEN school

Despite some very inclement weather – as unfortunately the Cumbrian coast is prone to a fair amount of precipitation – the steelwork was still able to complete a week ahead of schedule. This then allowed BSS to continue with the other elements of its package, such as installing precast floor slabs and roof decking.

“That’s one of the advantages of steel, it is quick to erect and only high winds, which we didn’t really get, will halt its progress,” says Wates Senior Project Manager Simon Humphrey.

“I’ve been involved in a number of steel construction jobs in the past and this one has been one of the most well organised. The trick is to order the steel early and get the fabrication started as soon as possible to iron out any snags, and this is precisely what we did.”

Completing the steel frame quickly allowed the follow-on trades to get an early start, helping to achieve the project team’s aim of creating a watertight structure before the onset of winter.

The Campus has been designed with a focus on using intelligent planning to produce a creative and collaborative learning environment for students across a wide range of abilities.

Mayfield, for instance, is a Mobility Opportunities via Education (MOVE) Centre of Excellence, combining therapy and education to teach children with physical disabilities and complex needs functional skills, such as sitting and walking.

Augmentative technologies will be used from the very first design phase to identify and propose flexible and innovative interior solutions to support these learning objectives and help students live more independent lives.

St Benedict’s interior will draw inspiration from the local area’s technological industries and provide solutions to facilitate a diverse curriculum, where students will be encouraged to explore robotics, renewable energy and low carbon technologies.

On plan, the overall project has a bird-like appearance with two long teaching wings positioned either side of a body-like structure that contains the entrance/winter garden and the sports areas.

Emphasising the avian likeness, the central body culminates in a triangular pointed entrance area that resembles a beak.

Each of the two schools will occupy one of the wings, with St Benedict’s getting a three-storey wing, and Mayfield being accommodated in a lower two-storey building.

Both of the wings are of a similar design with steelwork supporting precast planks and columns mostly based around a 7m × 7.5m grid pattern. This creates two perimeter rows of classrooms separated by central corridors – 1.8m-wide in St Benedicts and 2m wide in Mayfield – formed by intermediate columns.

“Building schools with steel is a tried and tested method,” comments Curtins Consulting Director Andy Roberts. “It’s an efficient way to build with the added benefit of built-in flexibility, whereby partition walls can be removed to create larger classrooms if and when desired.”

All of the classroom services are accommodated within the corridors beneath the steel beams, with individual services then directed into each class.

Each wing is a fully braced frame with cross bracings positioned in some internal partitions as well as in stairwells, which are located at each end of the structures. Because the wings are each approximately 100m-long, they are each separated from the central zone by movement joints.

As each wing is located either side of the entrance and the sports facilities, ease of access has been guaranteed to these areas as well as a fair amount of privacy.

The central shared zone of the Campus, which will also be the part accessed by the local community, is highlighted by the beak-like triangular pointed entrance which provides access into a double-height circulation area known as the winter garden.

The fully glazed entrance is formed with a series of CHS feature columns with UB roof beams and ties supporting a 159mm-deep aluminium deck roof.

The winter garden is a large open space with just one internal column, but with no heating, making it a pseudo outdoor environment. A large circular roof light will allow plenty of natural light into the zone. The longest steel elements of the project were used to span this area, with some beams measuring up to 22m-long.

Positioned towards the back of the winter garden are the shared dining areas, kitchens and sports areas. These consist of a number of double-height long span structures, with the largest being the main sports hall. The sports hall has a clear span of 18.4m, while the pool has a span of 15.1m.

“When looking at the structural choices for Campus Whitehaven, steel was the obvious choice. We have some large spans throughout the scheme and for economy wanted to keep the building height to a minimum, steel helped us achieve this.

“The winter garden forms the main entrance to the campus and we wanted a light and airy feel to the double-height space, while the dynamic triangular feature canopy that articulates the entrance was easily achieved in steel to give the minimal look we wanted,” sums up Ellis Williams Architects Associate Ruth Clayton.