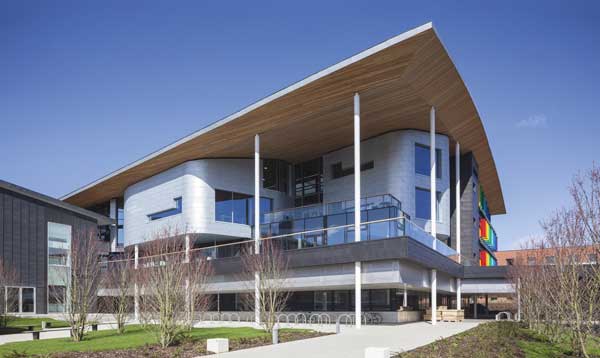 Part of Cavendish Laboratory’s long-term development programme at the University of Cambridge, the £26M science facility has been developed to foster advanced research in several scientific fields and is set to provide a new home for collaborative research.

The desire was to create an inspiring and iconic structure to bring together academia and industry. This idea demanded a solution which would be architecturally striking, while satisfying the various needs of the users with flexible research laboratories, high specification meeting rooms and offices on the upper levels.

During the early stages of the project the design team investigated a number of different structural schemes. As the design developed, it became clear that a steel frame with precast planks was the only solution that could deliver the architectural aspirations within typical structural zones of just 350mm within 13m-long spans.

Steelwork was also the obvious choice to realise the architectural intent, which features a double curved roof, as well as curved meeting rooms which reach out from the south elevation.

The complex and challenging double curved roof was designed to reflect the curved roof of the adjacent Physics of Medicine Building. The roof was created using a series of curved steel beams, each with a slightly different radius.

Ramboll Project Engineer Paul Astle says the company worked closely with the steelwork contractor and the specialist bending contractor to ensure that the member sizes used were readily available and were able to be curved to the necessary radii.

The different uses of space between lower ground and the upper floors meant that there were many constraints on the structural layout. To avoid columns disrupting the seminar room, the business lounge above is partly hung from the main roof beams. An 18m-long truss, made up of open sections, was used suspended from three points in the roof.

The centre of the building boasts a three-storey central courtyard covered with an ETFE roof. Within this courtyard two meeting pods cantilever out within the space, as well as an open balcony suspended from the frame.

Exposed precast plank soffits are an important visual element in the building and they are also utilised for thermal mass in the naturally ventilated upper levels.

The coordination of the steelwork support details was therefore of great importance particularly at the column-to-soffit junctions, which included support plates for the planks, substantial torsional connections for the beams, and a connection for an inverted tee beam which acts as a frame tie.

The steelwork is both internal and external, and in some areas it is concealed while exposed in other areas. The use of parts of the roof structure to support floors below also meant that appropriate fire protection was required for some of these elements.

The protection systems were set out in the steelwork specification, using the 3D Revit model. Members were then colour coded to identify their respective systems. This colour coded model was issued to the construction team to allow them to understand the protection requirements of each element.

Summing up, the judges say flexibility and efficient distribution of services were critical to this project. The solution was to use long-span floors supported on steel slimfloor beams, which also enabled natural ventilation. Four storeys are arranged under a doubly-curved roof, reflecting the adjacent building to which it neatly links.

The result is an efficiently elegant building.