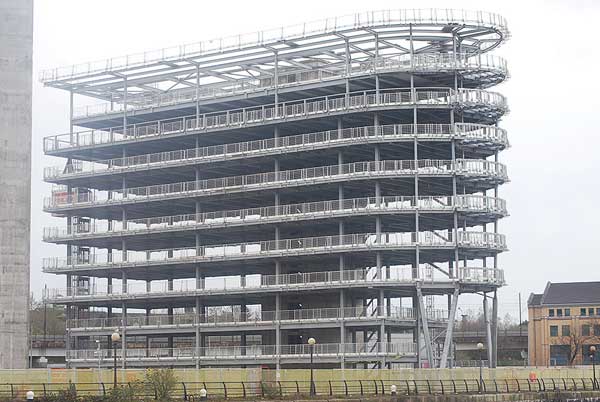 The first phase of an ambitious residential scheme, overlooking the Manchester Ship Canal, has chosen a steel-framed solution for its first two apartment blocks.

The scheme, known as X1 Manchester Waters, will help regenerate the island which has been identified as a new destination for business, residential and leisure by the local authority, complementing nearby Manchester city centre and Salford Quays.

Almost a kilometre long, Pomona Island is a strip of land sandwiched between the Manchester Ship Canal and the Bridgewater Canal that has been unused in recent times having previously served as docks for the once thriving inland port of Salford.

Further back in history, during the early Industrial Revolution, the island was home to botanical gardens and the Royal Pomona Palace, a venue that was bigger than London’s Albert Hall.

Manchester Waters is being developed by X1 with Liverpool-based Vermont Construction as main contractor. In total, the scheme is set to deliver five blocks in two phases, with the first two blocks (phase one) due to be complete by early next year.

The initial two steel-framed blocks (A and B) are 10-storeys and 12-storeys high and will contain a total of 216 apartments. These will be a mix of studio, one, two and three-bed units. 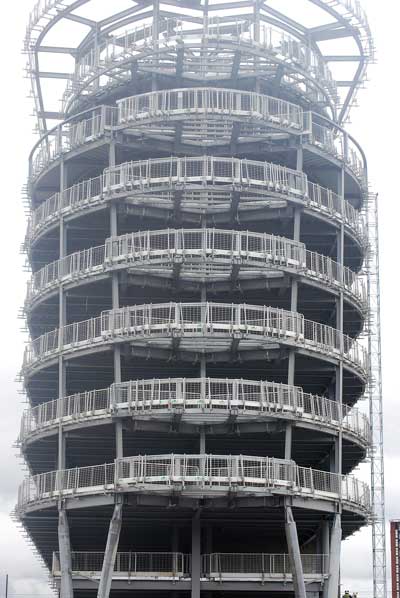 The buildings have rounded ship-like prows 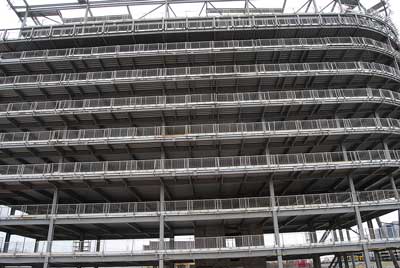 Balconies are to be retrofitted later in the programme 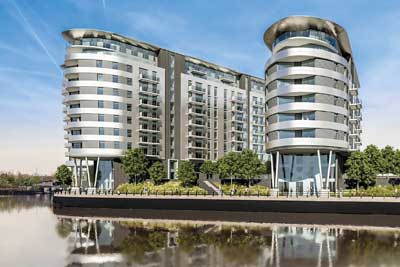 How the completed Phase One will look 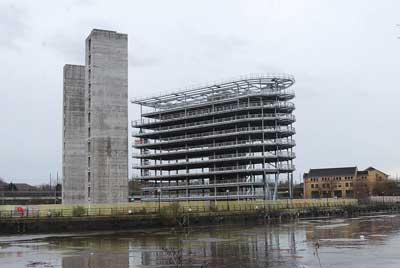 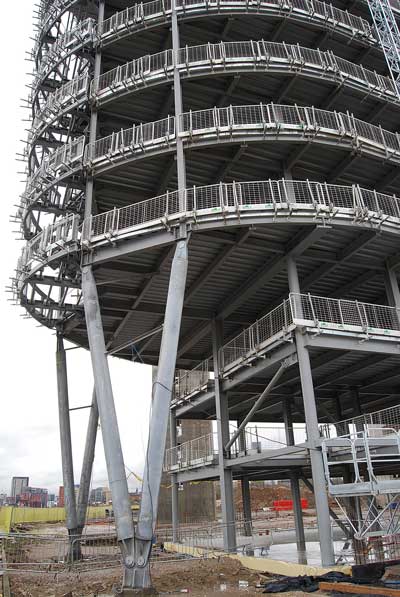 The planned second phase will consist of three blocks of 15-storeys, 17-storeys and 19-storeys that will bring a further 526 new homes to the market. The overall vision for the scheme will see the blocks progressively step up in height from the Salford Quays end of the island in the direction of Manchester city centre.

The design of all of the buildings is influenced by their prominent canal-side setting. Consequently, the structures will all have a nautical appearance with a rounded and raking front, which incorporates a cantilever supported by two pairs of V-shaped tubular columns.

Vermont started work on this brownfield site late last year and its initial groundworks for the first phase included the installation of piled foundations to a depth of 13m.

Block A and B’s concrete cores were then cast, which then allowed Elland Steel Structures to begin its steel erection programme.

Elland Steel has recently completed the erection of the 10-storey block A and it is due to commence work on the second (12-storey) block B later this month (May).

Commenting on the chosen framing solution, WSP Project Engineer Antony Jones says the decision to go for a steel construction method for the first phase was led by the contractor and was essentially a commercial decision based on cost.

Falconer Chester Hall Architects Associate Gareth Jones agrees and says the choice was based on economies of scale, as steel construction was the most cost-effective and quickest option for the initial two blocks.

He says: “A simple pallet of materials is expressed throughout the buildings, comprising smooth large format metallic panels, contrasting textured dark grey panels with a mixture of dark Terracotta tiles, all emphasising the layering of the building’s façade.

“This architectural language extends into the steel frame, with the exposed geometrical raking steel columns to the entrance areas located on the riverside elevations. This clear architectural dialogue, form and shape resonates with the maritime character of the former Pomona Docks.”

Both of the two blocks in phase one have a similar design, with the only main differences being the second building is taller, slightly longer and contains two concrete cores instead of one.

Block A is based around a regular column grid pattern incorporating 9.6m-wide bays. The floors are compositely formed with steel beams supporting metal decking and a concrete topping.

“As a residential building, acoustics have greater implications than for a similar commercial building. Part of the solution in this case was to utilise heavier 190mm thick floor slabs. This had implications on the steel sections utilised,” says Mr Jones.

“Further challenges with respect to the steel section sizes selected was hiding the steel within the walls and limited ceiling zones and maintaining tight deflection criteria.”

Throughout the building, a central spine corridor separates two rows of apartments on each of the floors.

The building has terraces on the eighth and ninth levels as the main structure steps back slightly.

The most prominent part of block A, and in time, all of the buildings, is the canal-facing rounded ship-like front. This is formed by curved members that create balconies from level three upwards.

Ground floor, first floor and second floor are all set-back at the front of the building, below a cantilever which is supported by the previously mentioned CHS columns. These feature tubular members are 457mm-diameter and each weigh 8t.

Elsewhere on the building, retrofit balconies are to be installed later in the construction programme. The pre-fabricated units will be brought to site and bolted to plates that Elland Steel previously fixed to the perimeter beams.
Manchester Waters Phase One is due to be complete by late 2020.

As well as phase two, future plans also include a podium that will wrap around all of the blocks. This will contain a ground level car park with a landscaped rooftop.