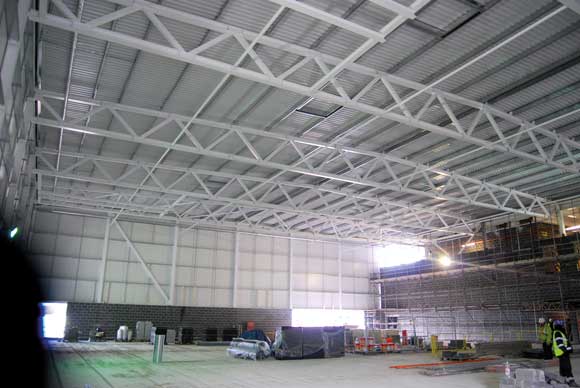 Structural steelwork has proven to be the ideal framing material for a new sports centre in Oldham.

Many of the 300 hundred plus textile mills that once dotted the town’s landscape can still be seen, although today they accommodate and serve different industries and trades.

Between the distinctive and traditional red brick buildings, numerous new structures are changing and enhancing the townscape as Oldham invests in its future.

A number of prestigious building projects have been completed recently (see boxes), most of them using steel as the main framing solution.

Currently under construction in the town centre is a new £15M sports centre, a replacement facility for Oldham that will contain far more amenities for the local community.

Oldham Council Leader Jim McMahon says: “A new state-of-the-art flagship facility for Oldham is an important piece of the regeneration jigsaw coming together.”

In addition to these sporting facilities the centre will also have 250 spectator seats for the main pool and 150 competitor seats at pool side; flexible seating for 250 people in the sports hall; exercise studios; separate changing facilities for dry sports, the swimming pools and fitness suite, as well as a cafeteria and outside parking.

Main contractor Willmott Dixon started on site mid-2014 and handover of the project is scheduled for 23 October. As with most projects these days, the programme is tight and efficiencies are key to completing the job on time.

“This job was procured through a collaborative framework approach,” explains Willmott Dixon Operations Director Mike Lane. “This helped us get subcontractors like EvadX on board quickly allowing them to start the steel design and fabrication process early, which in turn meant that steel arrived on site early in the programme.”

Getting the steel on site as soon as possible has helped the project team stay ahead of the game. With the steel frame mostly up and completed by Christmas, follow-on trades, such as cladding and concreting, were so also able to get an early start on site.

A three-storey middle core section houses the changing rooms on the ground floor, fitness and dance studios on the floor above and the bowling rinks and a plant deck on the uppermost level.

Either side of the three-storey section are two open column-free zones, one containing the two pools and the other measuring 45m × 36m accommodating the sports hall.

The large sports hall is formed with a series of 36m-long trusses, brought to site in two sections, bolted together on the ground and lifted into place as one large member. The trusses incorporate a pitch to form the roof and so their depth varies from 1.1m up to 2.8m deep at the apex.

The bowling area is another large column-free area and it is formed by a series of 20m-long rafters, linked together by tubular bracing.

The design of the floor of the bowling area, which is also the roof for the first floor fitness suite, had to take vibration into account.

“Although we largely designed the steelwork, Ramboll oversaw the project and had a lot of input for loadings and vibration. For the bowling rink, floor vibration could be an issue so we had to use large 914UKBs to help absorb any movement,” explains EvadX Project Manager Steve Morris.

“If for instance line dancing was to take place, that would cause far more vibration than bowling so we had to over-design the steelwork for all eventualities,” adds Mr Lane. 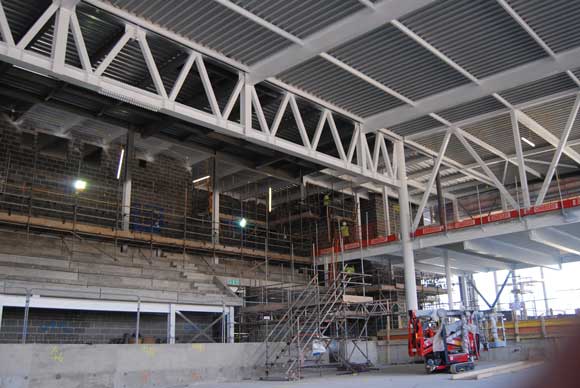 The most interesting and challenging steelwork is positioned above the main pool and takes the form of a large girder truss.

Weighing 15t and measuring 32m-long by 2.8m deep, the truss was brought to site as two fully fabricated halves that were then bolted together and then craned into place by two mobile cranes in a tandem lift.

This large steelwork element is an essential part of the steel design as it supports a second floor plant deck that is adjacent to the bowling rink and overhangs the pool.

“This truss had to be brought to site piece-small and then erected on site. It is 3m deep because it will incorporate windows overlooking the pool and consequently it would have been too large to be transported by road,” explains Mr Morris.

Both of these trusses connect back to a large 500mm diameter tubular column that forms the cornerstone to the pool area’s steelwork.

Oldham Sports Centre is due to be completed in October and the facility will open before Christmas. 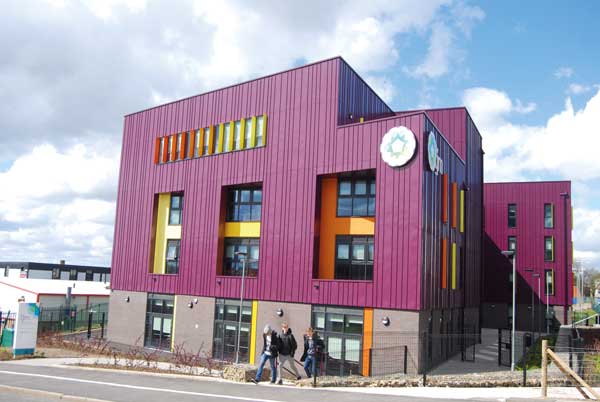 Oldham has produced a rich vein of steel-framed projects for Willmott Dixon. Recently the company has constructed three academies and a building for Oldham College, while in 2014 it completed the Greater Manchester Sustainable Engineering UTC, which is located adjacent to the Oldham Sports Centre.

A total of 233t of steel was fabricated, supplied and erected by Leach Structural Steelwork for this project. Leach also installed metal decking, precast stairs and lift shafts.

The £9M building opened in September and houses full-time education facilities for 14-18 year-olds providing opportunities for them to earn qualifications and experience for in-demand skills and become the next leaders in engineering. 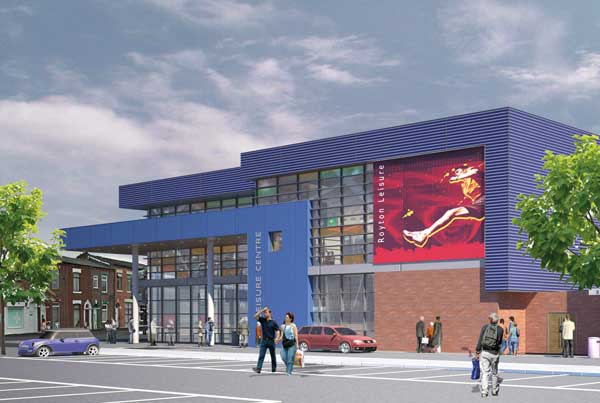 A few miles down the road from the Oldham Sports Centre, Willmott Dixon is currently constructing another similar project that is reusing equipment from the London 2012 Olympics.

Filtration equipment used at Royton has been sourced from training and warm-down pools that were dismantled after the London Olympic Games.

EvadX has erected a total of 200t steel for this project.