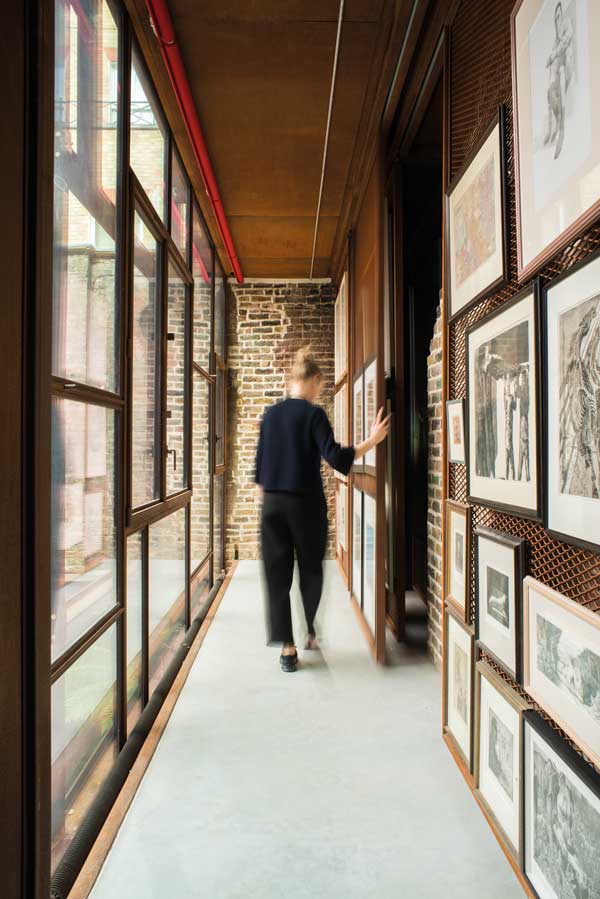 A steel-framed extension to a private residence houses the owner’s collection of photographs, prints, pastels and lithographs.

The client’s basic brief – a new rear extension housing art storage and display space as well as a new toilet – led the architect to devise an enclosed courtyard structure that provided a retreat and place to contemplate art.

Showcasing the aesthetic qualities and structural capabilities of weathering steel, the Layered Gallery adds a contemporary, flexible extension to the more traditional spaces of the residence.

Gianni Botsford Architects’ design concept was based on a series of superimposed screens, creating a layered effect against the blank brick wall vacated by the previous extension.

The outermost layer is a structural gridded screen made of weathering steel. The second is a weathering steel-framed glazed façade of museum quality UV-treated glass, which opens to allow natural ventilation.

“We like to work with one material and make it work really hard on every project we do. Here weathering steel was chosen due to its structural and self-maintaining properties, and was used not only for all structural and external elements, but also for most of the internal furniture and fittings,” says Architect Gianni Botsford.

Inside the extension, two additional layers hang from each storey’s ceiling: red blinds, which protect the collection of artworks and provide privacy for the new toilet; and the weathering steel display screens that display the collection.

The lower storey of the extension houses the gallery’s main display area where moveable weathering-steel mesh screens, on which artworks can be easily stored and rotated for display, are hung from ceiling rails.

This storey also houses a specially fabricated weathering steel toilet cabinet designed by the architects and from which a toilet and basin emerge when needed, adding an element of surprise and transformation.

The upper storey houses a sun-filled open gallery space topped with a glazed roof. A single weathering steel display shelf is attached to the existing brick wall, and the surrounding rooftops of Fitzrovia are framed by the patinated window frames and the structural screen beyond.

Cranage at the site was impossible due to the constricted space and protected surroundings, and so all structural components were sized to be carried into the courtyard through the house, drawing on weathering steel’s suitability for plate fabrication and optimised sizes rather than rolled sections.

Erection was aided by the use of bolted connections of the steel plates throughout, and the relative light weight of the individual members reduced construction costs associated with cranage.

One of the greatest challenges for this project was the numerous connections in the façade, which were carefully detailed and coordinated with the architect and steelwork contractor” says Entuitive Principal Toby Maclean.

“We needed to design thermally broken connections between the façade and the internal steelwork since the structure was left uninsulated outside the building’s envelope.”

In effect, the main floor beam stops at the glazing line and is supported off weathering steel plates cantilevered from the façade members. This allows the structural frame to remain entirely uninsulated on the exterior.

“A large number of elements make up the final structure that were all carefully co-ordinated between the structural engineer, the steelwork contractor and ourselves, and all erected without cranage in this tight site. This was achieved through careful modelling of all the elements to ensure they came together as planned and worked around the existing structures that were invariably out of plumb or level,” says Mr Botsford.

Summing up, the judges say this delightful filigree extension has completely transformed this historic house for its art-collector owner. Forming the backdrop to a new oasis of calm in a frenetic area of London, the building draws inspiration from organic forms of courtyard planting. Exposed weathering steel and external glazing systems are cleverly integrated.