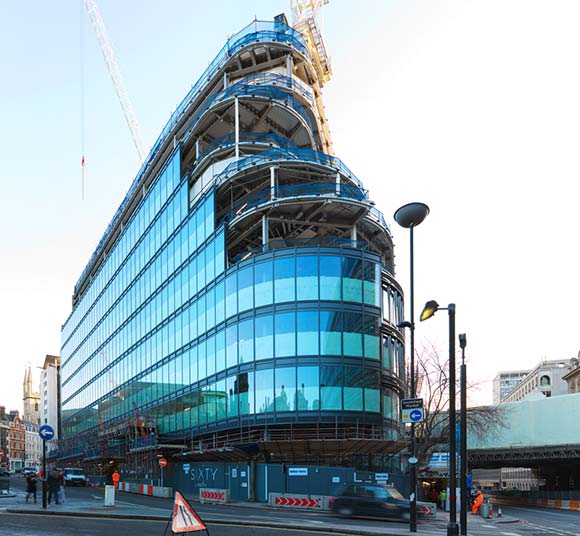 The project occupies a prominent site on a busy City junction

The eye catching commercial development at 60 Holborn Viaduct will provide 20,000m2 of energy efficient office and retail space over 13 levels. The building replaces Bath House, a former mixed use development that previously stood on the site and had become an outmoded structure in this fast changing district adjacent to the City.

60 Holborn Viaduct is a steel framed structure designed to achieve a BREEAM ‘Excellent’ rating with features such as solar hot water, use of low nitrogen oxide boilers and lighting control systems.

In keeping with its neighbours, a highly visual modern curving façade with a light glazed curtain walling has been chosen for the structure’s exterior.

Sightlines of St Paul’s Cathedral and rights to light had to be taken into consideration and explain why the structure tapers. Views of St Paul’s have to be maintained, while nearby buildings must not have their natural daylight blacked out. The building therefore is designed with a number of architecturally driven steps and terraces, the largest of which is located on the topmost ninth floor.

Planning stipulations also dictated that the new building could not exceed 53.15m above ground level. To make best use of the planning envelope and maximise the floor to ceiling heights on the office floors we have designed 465mm deep cellular steel beams. With 300mm deep cells for services distribution this provides an integrated structure-services zone and minimises the overall floor zone,” explains Scott Edgar, Ramboll Associate. 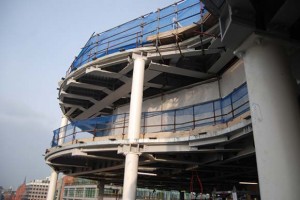 Terraces occur at levels 4, 5, 7, 8 and 9 and to support these areas a number of large transfer structures, formed with plate girders, have been erected. The deepest of these is 595mm deep and it had to be lifted into place in two pieces to suit the capability of the on-site tower crane.

In contrast to its predominantly contemporary style, 60 Holborn Viaduct incorporates a gatehouse, a structure built with traditional Portland stonework (see box) and erected to replace the site’s original gatehouse which was demolished more than 40 years ago.

As well as the reinstatement of an historic structure, the site’s topography has also been a challenge. The basement box is constructed in concrete and extends over the full footprint of the site with a higher ground slab to the east (Holborn Viaduct) where the external ground level is at its highest.  The steel frame is constructed off that slab with an additional lower ground retail mezzanine constructed in steel to the west where the ground level is lower. 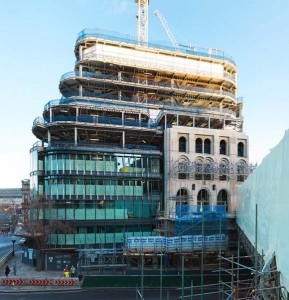 A rounded ‘bullnose’ feature protrudes from the western elevation, bounding Snow Hill and Farringdon Street. This feature is also the most complex part of the structural steel frame as a myriad of beams converge at one point. This meant a concentrated number of individual steel pieces were erected here to form the faceted perimeter, and steelwork contractor Severfield-Watson found this to be the most time consuming part of the job.

In order to achieve the desired long-span, column-free spaces within the offices the structure is predominantly arranged in a 12m x 9m grid pattern. One exception to this standard grid is the double height main entrance foyer positioned along the Holborn Viaduct frontage where a number of columns have been avoided by hanging the curved atrium slab edge from the steel structure above.

Two slip formed cores were erected prior to the steelwork package commencing. The cores had embedment plates cast into them during construction to form the connection with the steel beams, and this enabled Severfield-Watson to erect steelwork quickly and efficiently.

“Coordination is important on a site like this,” explains Andy Clarke, Balfour Beatty Project Director. “There’s no room for material storage so all of the steel had to be delivered on a just in time basis.”

Steelwork erection was completed towards the end of 2012, the project team is now racing towards this summer’s completion date.

The return of historic gatehouses 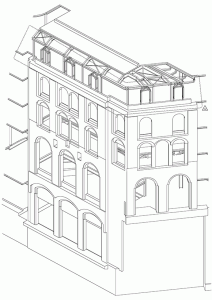 A key component of the project is the construction of the gatehouse that will reintroduce staircase access at the northeast corner of the junction between the higher level Holborn Viaduct and the lower level Farringdon Street.

Stipulated by the City of London, rebuilding the gatehouse was a major requirement for the new development. The structure will mean that once again the junction has a gatehouse in each corner.

Originally there were four of these ornate Portland stone buildings; two were demolished last century, with one of these later replaced when the northwest corner was redeveloped in the 1990s.

The new gatehouse is part of the same steel frame as the main building, but as it will be clad with Portland Stone, it will look very distinct and separate.

In order to replicate the original gatehouse design, the internal steel frame is encased in reinforced concrete which provides vertical support and lateral restraint to the stone façade. 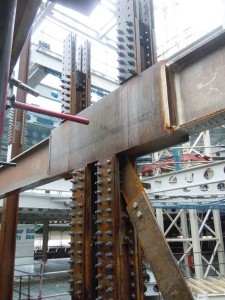 A twin column configuration was adopted for the gatehouse design

“Because of the intricate nature of the stone and the historic alignment of the windows between levels the steel frame to the gatehouse is complex.  A twin column configuration was adopted at the lowest level to minimise the depth and maximise the useable area within the stairwell,” says Scott Edgar, Ramboll Associate.

A lot of design time was spent on co-ordinating the gatehouse layout with that of the office block. At second floor level the new floor construction is stepped by 650mm to the rear of the historic windows to avoid obstructing the elevation while avoiding any loss of lettable area.

The brickwork of the viaduct supported the original gatehouse, but as this structure is now listed, and to control differential settlements between the Farringdon Road and Holborn Viaduct elevations a cantilevering steel structure has been provided to support the stonework.

“To limit the potential for differential settlements the new steel frame cantilevers over the viaduct by 1.5m separating the new building from the viaduct,” says Mr Edgar.