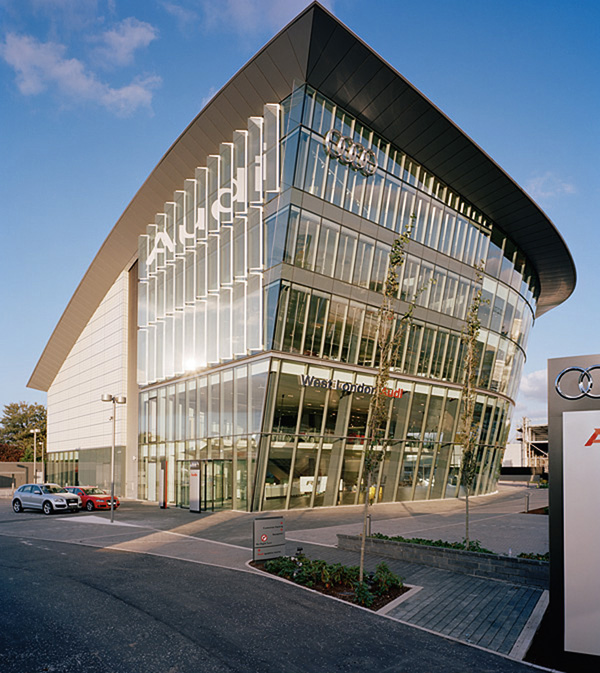 Steel construction played a major driving role in the completion of the London Audi Centre in Brentford which officially opened in October.

The imposing new building is the largest Audi centre in the world and features five floors, with an additional two basement levels, representing a £45M investment by Audi UK.

Working on behalf of main contractor ISG Interior/Exterior, Rowen Structures erected 690t of structural steelwork for the project during a nine week programme.

One of the most striking elements of the structure is a 12 degree raking facade along its southern elevation. This was formed with a series of front plated tapered raking columns, each 22.6m long and weighing 6t.

Two cranes were required to install these raking columns; one to temporarily support the column while the other crane was used to install the restraining floor steelwork.

“The remaining perimeter columns and roof beams were pin connected to allow movement within the structure,” said Jeff Matthews, Rowen Structures Project Manager. “All of these columns required temporary supports until the building was fully erected.”

Architect for the project Wilkinson Eyre says its inspiration was drawn from nature, art and science to create a technologically advanced sculptural form. The elegantly sweeping curves are said to be reminiscent of a manta ray, and the aerodynamic wing shapes of a B2 Stealth Aircraft.