Enfield’s Palace on target with steel 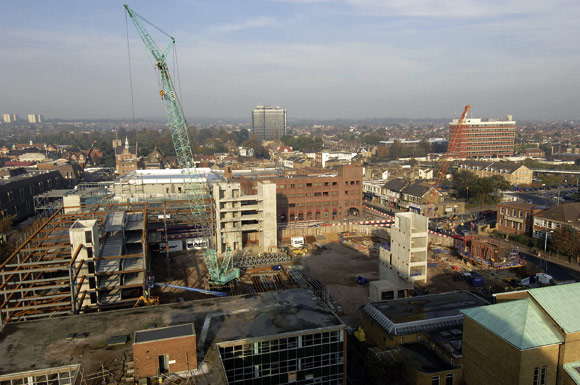 A 530 space, five storey steel car park will be the centrepiece of the redevelopment of Enfield’s town centre

The days of dreary car parks being tucked out of sight at the rear of developments are passing as architects and clients realize the benefits of using them as eyecatching signature buildings. Jon Masters reports on an innovative car park taking shape as a centrepiece of a London borough’s redevelopment.

An innovative four storey steel car park structure is a key element of the PalaceXchange shopping centre in the London Borough of Enfield’s town centre. The structure will be highly visible as the signature building of the development, but a successful construction programme is essential to deliver the scheme in time for Christmas trading at the end of 2006.

PalaceXchange, a project by ING Real Estate Development, consists of three main steel framed buildings and provides an extension to Enfield’s existing town centre retail facilities. An enclosed walkway across a new pedestrian precinct will connect two shopping malls and the most southerly of these will be joined by a slender steel footbridge across Cecil Road to the third building – the 530 space steel car park integrated with a glass fronted civic building. The civic facility will occupy one end of this structure, and include a new library, offices and other public facilities for LBE, over three storeys to the car park’s five.

According to Technical Director James Miller of structural engineer Gifford, selection of steelwork for the main frames was an important and early decision led primarily by what was wanted from the car park.

“The architect wanted essentially flat soffits within the car park and there was a desire to fit in as many floors as possible, so we needed efficient use of the building height,” says Mr Miller. “Design alternatives were considered, but not selected because with steelwork we could achieve a floor to floor storey height of 2.75m, which is a tight figure made possible by a very efficient structure and asymetric beams from Corus.”

Bourne Steel is the steelwork contractor on the PalaceXchange development, fabricating and erecting around 2,500t of steel for Costain which is carrying out the main £30M design and build contract for developer ING. Gifford carried out the outline design in 2002 as development consultant for ING and is now working as Costain’s designer. 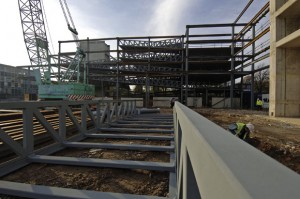 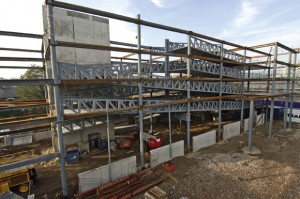 “The job was tendered twice, first as a two-stage, then a single design and build contract. At each point, contractors looked at concrete as well with various speed and cost comparions on the economics of the different solutions,” Mr Miller says.

“The design of all three buildings stayed as steel frame with composite floor construction due to the time constraints. The planning consent gave a narrow window of 112 weeks for construction, including extensive enabling works to get the development open by October this year.”

Costain’s Project Manager David Woodhouse said: “Steel frame is quicker and it also allows more flexibility on changes to design during construction. Time was the critical factor though. We could not have done the same buildings in reinforced concrete in the time available.”

The job has essentially been a logistics exercise for Bourne, working with main contractor Costain. The five storey, steel framed car park is on the critical path and has been built up in full height sections with reinforced concrete filled Circular Hollow Section (CHS) columns.

All of the steelwork is being delivered to a busy urban area to a schedule carefully managed by Costain and Bourne. But the CHS columns require particular attention. After fabrication, shot blasting and painting at Bourne’s yard in Poole in Dorset, they travel north in 18m lengths for filling by Tarmac in Derbyshire, before being transported back down to Enfield at the correct time.

“The logistics of the project are very important,” says Bourne Steel Divisional Manager Nick Flexen-Cook. “The CHS columns have to be fabricated early for preparation, concrete-filling, shot-blasting and painting before getting to site, plus there are concrete stair and floor units to go in at the same time. Planning is being carried out in close cooperation with Costain because we have occupied the site at the same time and we have got to work around each other.”

Erection of the steelwork is now nearing completion and the PalaceXchange is currently on schedule for its October opening. The retail accommodation is of two and three storey structures with storeys varying between 2m and 6m in height. The steel frame of the northernmost building weighs 310t and consists of 2260 pieces of steel and 7415m² of composite metal deck flooring erected in 10 construction phases. The southern building has a smaller floor area of 5130m² and consists of fewer pieces – 1378 – but is a heavier structure at 434t.

“The steel frames are a fairly simple design, with columns typically 254 UC 89 in the North frame and floor beams up to 610 x 229 UB 113. It’s fairly light stuff, but coordination of the fabrication, delivery and erection has been critical to the overall construction programme,” Mr Flexen-Cook says.

Bourne is due to complete its work at the end of March this year and now just has steelwork of the car park and civic building to finish off. The erection of the car park started in October last year. Bourne has operated on two work fronts in tandem, working out from the building’s four cores with two crawler cranes. Columns have been built on a large 12m grid, with 300mm deep hollow-core pre cast planks spanning between the asymetric beams.

The car park steelwork weighs 1482t and consists of 1703 pieces including the eight ramps between floors. The ramps were delivered to site as 13 pre fabricated, 18m long pieces. Each consists of steel lattice trusses forming the structural depth and the ramps’ barriers either side of pre cast concrete roadways. All of the structure is above the roadway, so no downstand interferes with headroom below. And an onerous 150kN restraint specification has been met with the steelwork barriers.

“The car park is the dominant feature,” says Gifford’s James Miller. “It is possible to build ugly car parks, but the PalaceXchange structure will have a slender appearance, alongside the glass fronted civic facility which will wrap around one corner of the building. Cladding has been chosen carefully and will be Cedar from sustainable sources.”