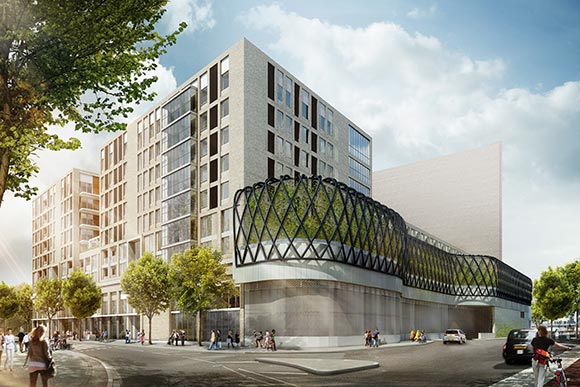 A mixed use regeneration scheme in east London features a rooftop private garden that sits above a supermarket.

London’s skyline is continually changing and if you blink you are likely to have missed a new building going up or an old one coming down.

Nowhere is this more so than in east London, where the continuing expansion of the Docklands development, the Olympic Park and a number of other schemes have culminated in regenerating large swathes of this previously forgotten part of the capital.

Forming part of the £3.7 billion Canning Town and Custom House Regeneration Programme, Hallsville Quarter as it has now been named will act as the catalyst for the transformation of the wider area, helping to form a new, thriving and prosperous district centre for this emerging area of east London. 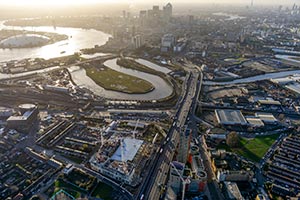 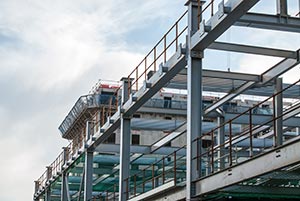 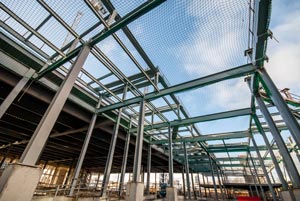 Bouygues Development will deliver in Phase One 179 new homes (of which 108 flats are marked for sale, 20 shared equity and 51 affordable rented) arranged around a shared garden at podium level; a Morrisons food store and secure underground car parking at ground floor level. An energy centre capable of serving the requirements of the entire development will also be provided.

Overall the scheme’s design has taken on a hybrid approach with structural steelwork also being used for the long span areas such as the supermarket. This frame also acts as a podium to support the garden and townhouses above.

“Steel is ideal for these areas as it is quick to erect and the supermarket required long open spans which is best done with steel,” says Rory O’Sullivan, Bouygues UK Senior Engineer.

The supermarket incorporates a 2.8m high concrete formed basement, while the store’s floor consists of a 250mm solid composite floor formed with a 100mm precast slab.

Founded on baseplates bolted to the slab, the steel frame for the supermarket is a 9m high double height space that consists of a series of 1.2m deep plate girders, each weighing up to 12t each. These large sections span the 16m × 16m grid to form the roof, while a series of 1m deep secondary beams give the structure added support.

“We’ve had to use such large steel sections as the supermarket roof will support 1m depth of soil and semi-mature trees up to 6m tall,” explains Mr O’Sullivan. “Consequently the steel frame has been designed to absorb loadings of up to 3t per m².”

Adjacent to the supermarket the steel frame also includes a service yard and warehouse. These areas are based around 8m and 10m wide grids respectively and are formed with a series of 1m deep beams.

“This part of the steel frame will support the townhouses which are built with a lightweight steel framing material,” says Philip Bell, MLM Project Engineer. “The beams didn’t need to be as large as the supermarket roof due to the shorter spans.”

Three seven-storey blocks and a row of 14 four-storey townhouses that sit in a horseshoe shape arrangement around the central green space form the residences.

Shielding the townhouses and providing a feature element along the A13 facing elevation is one of the project’s main and most visible steel elements. Architect Haworth Tomkins Associates has designed an 110m long steel screen that S H Structures is fabricating from 168mm diameter circular hollow sections.

Arranged into a lattice truss the screen bolts to the project’s podium steel frame at first floor level and is due to be erected in September.

A series of square eight bolt base plates has been installed to which the screen will be connected. These connections are designed to resist a large overturning force at the base of the screen, while further up there will be a second pin connection point.

In cross section, the screen is hockey stick shaped with the long handle making the 7m height and the short leg creating an overhang at the top. A stainless steel mesh curtain will be suspended from the inside overhang to provide support for climbing plants.

After fabrication the screen will be trial-assembled in SH Structures’ factory in Sherburn-in-Elmet, North Yorkshire, and brought to site in sections.

“Using a series of jigs we’ll build it in full height panels in our factory and then split it horizontally for delivery because a complete panel will be too wide for road transport,” says Tim Burton S H Structures Sales and Marketing Manager.

Locating brackets pre-welded onto the truss will ensure the two halves of each panel align exactly before being welded on-site.

Bouygues UK will complete phase one in early 2015, by which time the adjacent phase two (mostly residential) will have started. Once all five phases are completed in 2024 the development will be at the heart of the wider Canning Town and Custom House Regeneration Project, a £3.7bn scheme which aims to transform a large part of the London Borough of Newham.