Steelwork has recently been completed on the latest warehouses at Cabot Park, the largest multi-modal distribution park in the West Country.

Covering an area of 183 hectares, Cabot Park is a fast expanding multi-use distribution park near Bristol, which also has some of the best transportation links in the UK.

Close to Junction 18A of the M5, the park also boasts an international rail freight depot as well as shipping facilities at the adjacent Avonmouth Docks.

The development is home to a number of well known industrial and retail companies, with developer ProLogis the latest name to be associated with it.

Atlas Ward Structures has recently completed the steelwork for two warehouses on the site for ProLogis, on what is the Pan-European developer’s first development in the South West of England.

Known as Crossflow 550, the new building, which is funded by GE Real Estate, will create around 600 new jobs in the logistics sector. The warehouse will be ready for occupation within the next few months and joint agents Knight Frank and CBRE, say the scheme has already attracted plenty of interest from potential occupiers.

The warehouse is a five span portal frame structure containing 50 docks along the two side elevations, hips to both ends and a three-storey office block connected at one corner. The main warehouse dimensions are 5 x 33m spans, 36 x 8.2m bays long and 12m to underside of haunch.

Andrew Bramley, Atlas Ward’s Project Manager, says this project was erected in eight weeks as it is predominantly a greenfield site with plenty of room and good access for deliveries.

“A month after completing the first warehouse we then erected a similar but slightly smaller structure on the same site,” he adds. “This was completed in a three week programme.”

This second distribution centre has three 28.5m spans,14 bays of 8.45m, is 10m to underside of the haunch and has 25 docks along one main elevation. The structure is also hipped at both ends and also contains a two-storey office block.

Commenting on ProLogis’ decision to move into the Bristol area, Vice President George Glennie said: “We have traditionally developed distribution facilities in the South East and East Midlands, but we recognise that the South West is becoming increasingly important as a logistics hub – particularly in light of EU legislation restricting the distances that commercial drivers can travel in one day.

“With its excellent motorway links, proximity to Avonmouth and its international rail freight terminal, Cabot Park is an ideal location.” 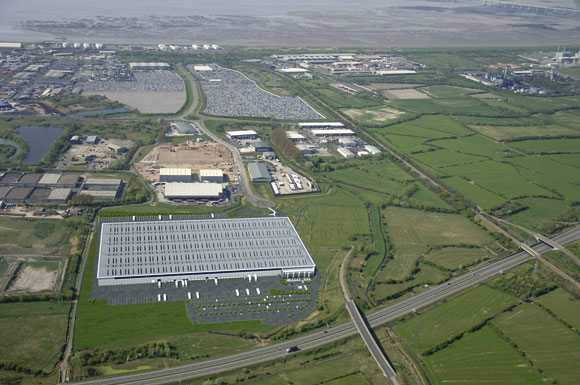