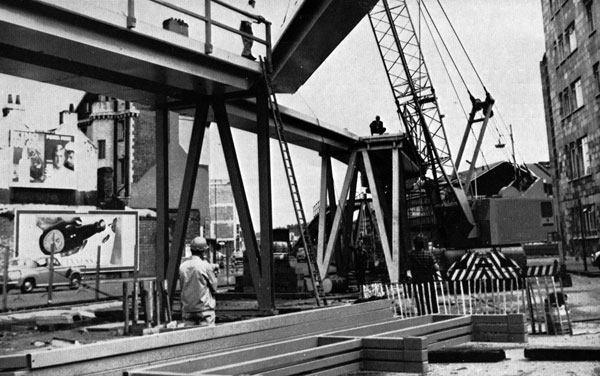 The flyover being erected by the steel fabricators

Bristol Corporation’s re-erectable flyover was opened to traffic in September 1967. It has been erected in the first instance at the intersection of the Inner Circuit Road with Victoria Street, on of the city’s principal radial roads, and provides grade separation for west bound Inner Circuit Road traffic. The re-erectable flyover will ease traffic flows at this junction until a permanent reconstruction is undertaken in the future. The superstructure of the 1,088 ft long flyover comprises four basic units, namely:

(3) Mild steel fitted infill pieces which are placed between and secure the straight box girders and which also cater for a minimum horizontal curvature in the structure of 300 ft radius when the box girders form chords on the curve of the carriageway: and finally, 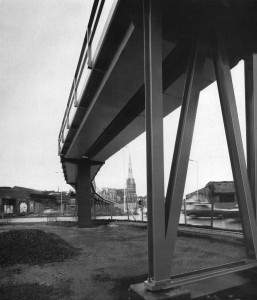 All of these basic components are of welded construction and were fully fabricated and painted at works. The ¼ in. thick epoxy resin carriageway surfacing was also applied at works.

The H-section steel piled foundations were driven in advance to delivery of the site of the superstructure steelwork and this work had to be undertaken expeditiously and with the minimum disturbance within the restricted area provided by the central reservation of the outer circuit dual carriageway and within the islands on the road junction beneath the proposed flyover.

Due to the importance of the road junctions and the heavy traffic flows, complete road closures were not possible and the 400 tons of bridge superstructure components had to be erected directly from delivery lorries in a predetermined sequence during short periods of off-peak traffic flows. High tensile bolts were used to bolt together the basic bridge components.

The City Engineer and Planning Officer, J. B. Bennett, MICE, MIMunE, was responsible for the design of the flyover.