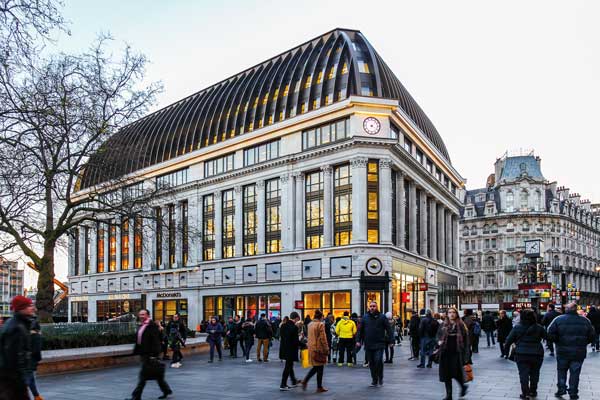 Steel-framed retail and office accommodation have been created within what is said to be Europe’s largest retained façade.

“Our brief was to create a high-spec office building and we felt that the goal was not just to reimagine but reinvent, while also retaining the look and feel of the original building, which is liked and admired by so many people,” says make Lead Architect Frank Filskow. 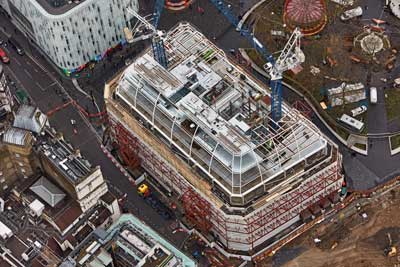 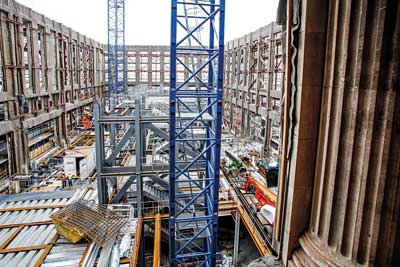 The completed building was erected to the required tolerance of 15mm over the full height, making the project challenging for the engineering and delivery teams. It was however completed on time, to budget and to the client’s satisfaction.

The upper floors are enclosed by a new curved mansard roof. This contemporary roof design is supported by a structural steel-framed central core and new perimeter stanchions. The new office floors are column-free with spans of up to 12m providing what is said to be very efficient floor space.

A new two-storey basement was created by the installation of a secant piled wall inside the retained façade profile. Slimdek floor construction was determined to be the best option for the basement and ground floor slabs in order to maximise headroom in the below ground spaces, while minimising excavation depths.

The project was designed using Revit 3D modelling techniques to capture the integration and interfaces of both architecture and building services. This assisted the design and construction activities, but also provided full integrated models for future use.

The steel-framed façade dates from the 1920s and 1930s, however some areas were added during the 1960s. The steel columns are all encased in Portland stone and consequently in good condition.

However, steelwork originating from various decades required extensive laboratory tests to determine its make-up and suitability prior to making welded connections.

“The lab tests allowed for a trouble-free on-site welding process and, as we were sure of the existing columns’ make-up, it meant works on-site ran smoothly and efficiently,” adds Multiplex Project Director Asif Hashmi.

Above the retained façade, the new fifth floor is clad with Portland stone to integrate with the existing building. This floor level’s steelwork is topped with a ring beam that goes around the entire perimeter of the building.

The ring beam is formed from jumbo box sections measuring 650mm × 450mm with a 25mm thickness. The sections were brought to site in 3.5m-long sections each weighing 3t. The box section ring beam performs two functions; one is to support the columns for the feature mansard roof as its columns are not aligned with the building’s main columns, while the second function is to support the stone cladding for the sixth floor which is hung from the beam.

This new and elegant curved mansard roof encloses the building and is said to offer a modern interpretation of the traditional mansard style where arch geometry sits atop a classical base.

The judges say the use of structural steel for the new internal structure, including cores, enabled new clear-span floorplates to be achieved, while respecting the existing listed façade.  It minimised disruption during construction in London’s busiest tourist area.

With its graceful three-storey ‘top-knot’, the building has a new lease of life as a striking yet respectful landmark in the West End.

This project showcases the role steelwork can play in the extension and re-purposing of historic buildings.