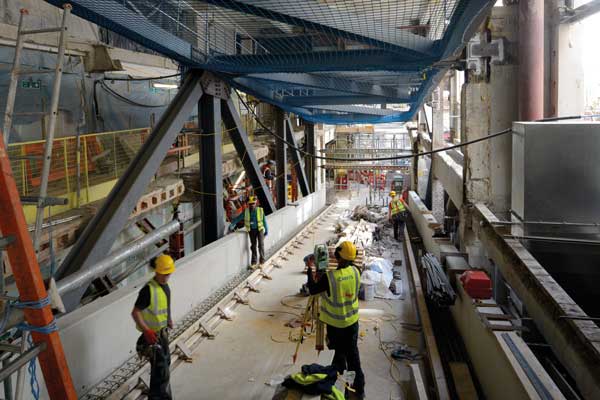 The creation of a new egress ramp at a famous London department store involved a highly complex piece of engineering design and construction.

Once work got under way, the first phase included the rearrangement of access to the store loading bays, located in the basement immediately below retail space.

The completed works update access to modern requirements and prepare for a second phase, which will see a dramatic refurbishment of the eastern store frontage, opening onto the new accessories hall when it completes in 2018.

This first phase of the project included major engineering interventions in a highly-constrained site.

“Steel was chosen as it was the most appropriate material for the project due to the site constraints imposed by the confinements of the existing building and compatibility with the existing structure,” explains Expedition Engineering Associate Alessandro Maccioni.

“Using steel also allowed the frame to be broken down into elements of a size that could be erected within the tight site.” 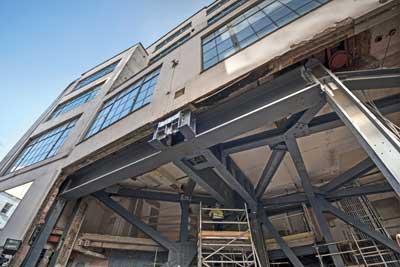 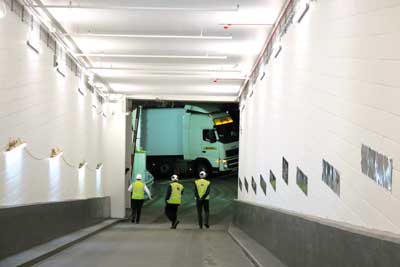 The Duke Street phase of the project also included forming a new staff entrance into the building below Edwards Mews and realignment of the HGV entrance ramp to the loading bays.

The primary feature of the first phase of works was the insertion of a new 50m-long 165t steel-framed bridge structure, through the existing store, to improve HGV egress from the basement loading bays.

This new structure is a braced steel tube linking the loading bay within the basement to Duke Street.

Design and execution of the structural interventions were made more complex by the limited existing building information, and numerous historical alterations that were discovered during the build. All of these required modifications to be made to the new construction as it progressed on site.

To maximise retail space for the client the preferred routing of the egress ramp was tight to the perimeter of the building. This routing allowed the ramp to be partially supported on the existing steel structure, but necessitated the partial removal of three existing columns that then had to be re-supported on bespoke steel transfer girders integrated into the new ramp structure.

The routing of the ramp meant it would span over an occupied three-storey basement. To minimise disruption to these basement spaces, and to minimise the need for new foundations, support was taken from the existing 1920s steel structure along the northern edge of the ramp.

On the southern edge of the ramp vertical support was limited to two new columns between which a new steel truss would span. The new columns were threaded down through the existing building and supported on new hand dug pad foundations.

To allow the ramp to connect between road level and the loading bay within the basement a large slot was cut into the existing ground floor slab. Diaphragm action of the ground floor slab was maintained in the temporary condition via a temporary propping system until the diaphragm loads could be taken by the new ramp.

Two transfer structures used to re-support the columns above the ramp were deemed to experience vertical deflections exceeding acceptable limits for an occupied building.

To negate the existing structure experiencing these movements, an erection approach that utilised a jacking process was adopted.

The jacks were used to push the transfer structures down, realising the anticipated deflections before connections were made to the existing columns. The result of this approach was to limit movements of the existing structure to just a few millimeters, while no noticeable damage to the building’s finishes were observed.

These load transfers required very close coordination between the design team and the numerous trade contractors involved, and were carried out overnight when the building was unoccupied.

“A key challenge in the construction of the new ramp structure was the fact that it was to be constructed within a live existing building. Steel was the best and simplest way to achieve this, as keeping the store open and causing minimal impact on Selfridge’s retail activities was key,” explains Blue Sky Building/Sir Robert McAlpine JV Project Manager Martin Ewing.

As the structure was to support HGV vehicles the steel forming the structure was of a scale that could not be manhandled. The project team therefore developed a series of temporary works that spread the load of a spider crane across the existing suspended basement floor. The crane could then be safely driven into the space via the existing loading bay entrance without back propping through the levels below.

The creation of this new egress ramp within an existing steel structure was highly complex, yet successful.  A key challenge for the engineering design and construction was that the work was to be carried out in a live and busy existing building, with ongoing high-end retail operations being immediately adjacent to the work zone, say the judges.