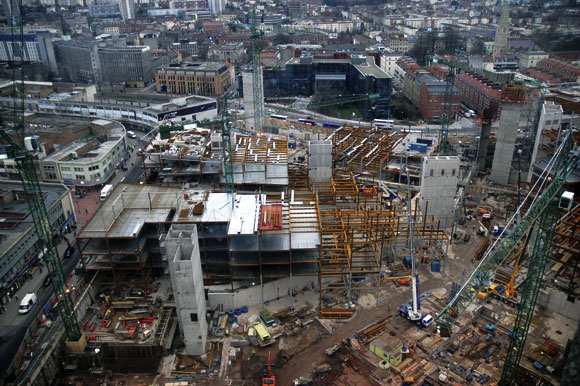 The central retail area will have three covered streets

The huge mixed-use Cabot development includes a steel framed retail zone with a difference. Martin Cooper reports on a project which will remain open to the public 24 hours a day and transform a large area of Bristol.

The centre of Bristol is currently a hive of construction activity, with numerous cranes towering over the city, as the largest and most important regeneration programme since the post World War Two reconstruction gathers pace.

The £500M Cabot development involves the creation of a new city quarter at the entrance to Bristol, close to where the M32 begins. The scheme, which is due for overall completion in late 2008, will add one million square feet of retail and leisure space to the city’s centre.

There are three elements to the development: a central area containing three covered streets of retail outlets, a cinema complex and a four-storey 175,000m² House of Fraser anchor department store; a new public square around the historic Quakers Friars, featuring more shops, restaurants and apartments; and 24 affordable housing units with an adjacent 2,600 space multi-storey car park linked into the main central retail zone via a footbridge.

The development is being undertaken by Bristol Alliance, a joint venture partnership between Land Securities and Hammerson. 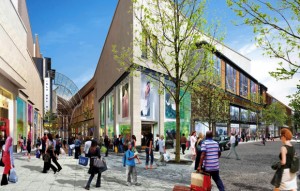 Robin Dobson, Bristol Alliance Project Manager, says this project is different from the many other city centre re-developments being undertaken in the UK at present. “The central or main retail area. along with the new Quakers Friars square, will be unlike most other shopping developments as they won’t be enclosed and will remain open to the general public twenty four hours a day,” he explains.

For this reason, Mr Dobson adds, this is a true city regeneration project which will create public areas that will be open to the public even after the shops are closed.

The central retail zone is arranged around three streets which converge in a large public square in front of the House of Fraser store. The streets and square will be covered by a steel and glass grid shell roof which is being fabricated and erected by Portal.

However, as well as keeping the central retail zone open 24 hours a day, and maintaining a covered light and airy atmosphere, the scheme had to be flexible. For this reason the central zone is primarily a steel framed development based around concrete cores.

Mr Dobson comments: “That’s why steel was chosen for this area, not just for its speed of construction, but also its flexibility.”

The developers were keen to create a retail environment where units could easily be enlarged or altered in the future. “Steel framed shops are more flexible and tenants will be able to change the unit’s configuration. Concrete walls, for instance, are difficult and expensive to knockdown,” explains Mr Dobson. 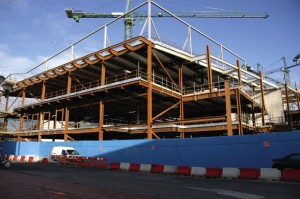 The retail buildings are based on a 7.5m x 7.5m grid over three levels

Severfield-Reeve is fabricating, supplying and erecting approximately 13,000t for this part of the project.

Within the central retail zone there are five buildings arranged around the three streets, with a sixth structure – the House of Fraser anchor store – situated at the end of the thoroughfares.

The three retail streets will each have three trading levels, with the top levels linked by six footbridges. Excluding the House of Fraser building, the retail zone will house 15 major stores and more than 100 additional shops.

Interestingly, each of the retail blocks is slightly different from its neighbour, as a different architect from masterplanning architects Chapman Taylor worked on each building to ensure a degree of individuality, but still keeping within the the project’s overall vision.

Grahame Andrews, Director London & South East Region for structural engineer Waterman Structures, says the majority of steel construction has been based around a 7.5m x 7.5m grid pattern, except in the House of Fraser store which has a larger 10.8m grid plan.

“The retail building’s individuality will be highlighted in the cladding which will differ, although all of the blocks are different sizes offering varying floor plans,” says Mr Andrews.

The largest building is known as Block 6 and this will contain a 13-screen cinema complex on top of two retail levels and one floor of catering outlets. Known as a Cinema de Lux, the complex will cover a 9,300m² area and contain more than 3,000 seats throughout its auditoria. The complex will also feature 12 new restaurants, which in the words of the developer, will help to transform Bristol’s night time economy.

“Above the retail floors the grid pattern changes to allow for longer spans,” explains Dave Lee, Project Manager for Severfield-Reeve. “It was important to have open areas with few columns in the cinema complex,” he adds.

As well as some long 20m rafters installed in the cinema, Severfield has also erected some large transfer beams over the project’s service yard. The majority of the central retail zone is built on top of two basement levels and these incorporate a service yard which is located under the central square. This yard is also situated beneath two retail buildings and large 20m-long transfer beams have been installed to support the floors.

One of the more challenging aspects of the project for Severfield has been the erection of a number of perimeter cantilevers. Two of the retail blocks cantilever over one of the adjacent streets and, in conjunction with Waterman, Severfield designed and erected the “required packing in certain areas,” says Mr Lee. 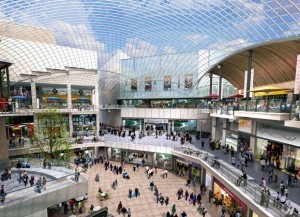 The three streets converge at a large covered public square

However, the House of Fraser store juts out over a bus lane with three floors of building above the cantilever. “We had to install a large quantity of temporary props to support this area, and they could only be removed once all the floors were erected and fully decked,” says Mr Lee.

Severfield-Reeve is expecting to complete the steel erection at the Cabot development in May. “By that time we’ll have erected some 13,000t,” says Mr Lee. “But on a project of this size, it’s hard to give an exact total as some aspects are still being detailed.”

Meanwhile, the roof over the retail zone has been designed by Chapman Taylor, along with UK artist Nayan Kulkarni, and it is said to be one of the largest grid shell structures of its kind in Europe.

“The roof will provide protection from the elements without losing the open air ‘city centre experience’, one of the key priorities in the overall design,” explains Simon Scott, Director at Chapman Taylor.

“There won’t be any doors to the streets, allowing a free-flow for pedestrians at all times. As this is a regeneration scheme we are creating covered public open areas which will remain accessible all of the time, and consequently the development isn’t turning its back on the surrounding residential area.

The roof’s grid form allows for a lightweight construction with no column supports, with spans of up to 60m across the central square. “The roof has a number of curvatures and these address the site’s slope and consequently the different heights of the buildings,” says Mr Scott.

Commenting on the overall scheme, Councillor Barbara Janke, Leader of Bristol City Council says: “People in Bristol have been waiting a long time for this development. The expansion will make the city one of the top shopping destinations in the UK and bring enormous economic benefits, including some 2,000 new jobs.”