Posted on October 14, 2017 by NSC in Award, SSDA Awards, This month's featured stories 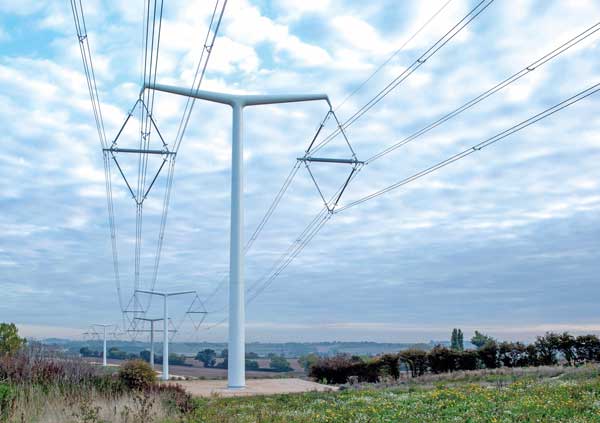 The result of a design competition to find a 21st Century power pylon for Nationalgrid UK, the T-Pylon has very few parts, can be erected quickly and requires virtually no maintenance.

The competition was a response to a global wave of public opposition towards conventional lattice towers, to find an alternative that would be a visual improvement to current solutions as well as cost-efficient and functionally superior. The idea was that the new design would also signal the transition into renewables.

The T-Pylon is made from steel, which has allowed for unique geometries. Contrary to conventional lattice tower designs, the arms of the T-Pylon are slightly raised, which give the pylon a more optimistic and positive appearance. The few parts making up the pylon have been welded together and subsequently painted white.

The tower design is shorter and leaner than traditional lattice towers for better aesthetics, less environmental impact, and a shorter installation process.

Nationalgrid former Executive Director Nick Winser says: “In the T-Pylon we have a design that has the potential to be a real improvement on the steel lattice tower. It’s shorter, lighter and the simplicity of the design means it would fit into the landscape more easily.  In addition, the design of the electrical components is genuinely innovative and exciting.”

The use of steel and the alternative design has made it possible to obtain the aesthetic and functional goal: to minimise the visual impact on the surrounding landscape, while also providing a resistant and durable solution.

“The T-Pylon blends better into its surroundings as it is shorter and sleeker than the conventional lattice pylon. The modern design is fit for the 21st Century and beyond,” says Bystrup Business Development Manager Mette Mikkelsen. 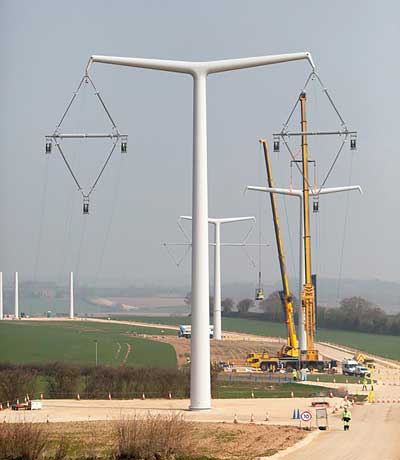 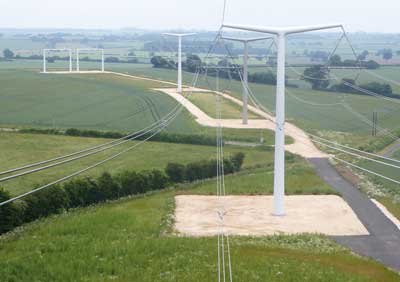 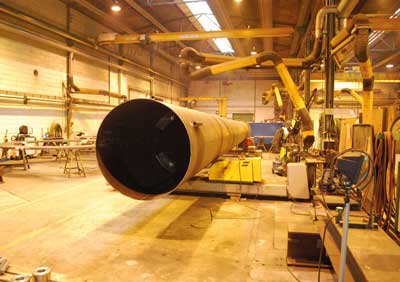 “The new pylons are made to last for at least 80 years without routine maintenance. At the same time, they have to carry extreme loads from the conductors. Steel has been chosen because of the beneficial material characteristics that provides the most cost-efficient solution.

“By using steelwork, we have been able to optimise the construction according to the required strength. The shaft is produced in several sections in different thicknesses according to the loads. The T-node in the top of the shaft (connection of the arms and shaft) is cast SG iron, transferring the loads from the arms to the shaft and then to the foundation.”

A radical innovation is the reassessment of the conductor/cable arrangement. The prismatic configuration of the cables allows a reduction in the pylon’s height by more than 30%. The footprint of the power lines as well as the electro-magnetic field (EMF) radiation is reduced.

All of the conductors are carried by a single attachment point. Traditionally, such a structure would have three separate arms – each carrying an individual conductor.

This unique attachment point was studied closely to ensure its robustness and resistance to fatigue. Complex analysis and physical loading tests were carried out to simulate climatic conditions, such as extreme winds and ice loads. Investigations were made into the dynamic performance of the structure under simulated vibrations.

“The biggest challenge when designing a new power pylon is to develop a design that is visual acceptable, functional and cost-efficient at the same time. The T-Pylon is the result of a process where these factors have been incorporated in one single design,” added Ms Mikkelsen.

“A survey has shown that the public prefer the T-Pylon design instead of the lattice tower. At the same time the operator has a long list of technical benefits such as reduced magnetic field, no routine maintenance in 80 years, easy installation, reduced audio noise and maybe the most important result – that the pylon is 22m lower than the traditional lattice tower, while carrying the same energy. The T-Pylon is a feasible solution that can be used for any transmission project in the future.”

The design of the pylon’s shaft is similar to the design of towers for wind turbines. Consequently, it has been possible for the manufacturer to use the experience from wind turbine towers to produce the shaft using automated processes in controlled factory conditions. This simplifies on-site operations and reduces construction labour as well as environmental impact.

In summary, the judges say the T-Pylon represents a generational step change in power transmission hardware. Analytical design from first principles included re-examination of arrangements for insulation and maintenance.

The result is a family of compact pylons which can be deployed in sensitive landscapes, with prefabrication enabling consistent finish, smaller land take and speedy erection.

This is a steelwork design classic.