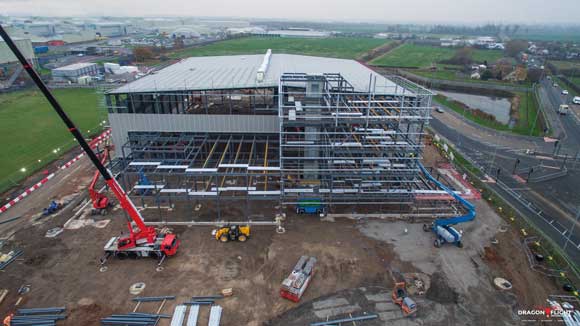 A multi-million-pound research facility is set to help collaboration between industry and academia as well as providing a significant boost to the Welsh economy.

Located alongside the huge Airbus UK manufacturing centre, the facility will be managed by the University of Sheffield Advanced Manufacturing Research Centre (AMRC), who will occupy half of the new building, with Airbus taking the other half.

Executive Dean of the AMRC Professor Keith Ridgway says: “We share the Welsh Government’s bold ambition to enhance North Wales’ reputation for manufacturing excellence, creating secure, high-value jobs and wealth for the whole of Wales by acting as a magnet for inward investment.

“The new facility will bring the research and innovation talents and experience of the University of Sheffield AMRC to a new venture in a region rich in manufacturing history and opportunity.”

The aim of the project is to make the facility an open access research hub that will drive significant improvements in productivity, performance and quality not just in the aerospace sector but across the broader advanced manufacturing sector in North Wales.

Airbus is a long-standing partner of the AMRC and its involvement will ensure the it remains at the forefront of aerospace development, supporting skills in the area and upskilling its manufacturing supply chain partners. 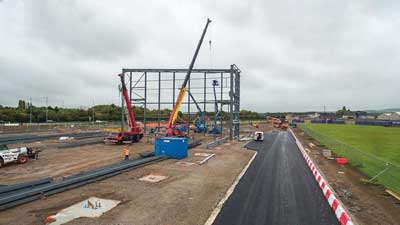 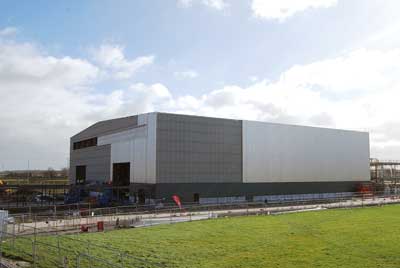 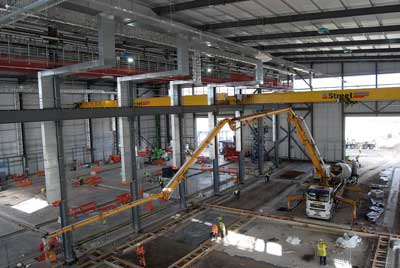 The facility is housed in a large twin-span propped portal frame that measures 80m-long × 60m-wide with a maximum height of 24m. One row of offset internal valley columns separate the main workshop part of the building into two parts, one with a span of 33m and the other 27m.

One end of the structure houses a full-width office block, divided in half by an entrance and atrium. This part of the scheme has a composite design with steelwork supporting steel decking and a concrete topping to form the floors.

One half of this block is two-storeys high and will accommodate the facility’s offices, while the other side is four-storeys and will house further office space on the ground floor, a first-floor canteen and then two upper levels for plant equipment.

Explaining the project’s use of steel, Galliford Try Project Manager Graham Ford says: “This project was always going to be a steel-framed job, as the long spans could only be economically constructed with steel.”

The initial steel design was done by Arup, but later in the programme EvadX was sub-contracted as project steelwork contractor on a design and build basis.

One of the more onerous parts of the steel design were the crane beams that are installed along the entire length of both spans that allow four 12t-capacity gantry cranes (two in each spans) to operate inside the facility.

“We had to design the supporting steelwork to some very tight tolerances, 8mm plus or minus, as any movement on the beams would stop the cranes working,” says EvadX Project Manager Steve Morris.

The crane beams are supported by the structure’s perimeter columns as well as on brackets positioned on either side of the valley members. Because of the extra loadings and vibration associated with crane movements, the column sections are larger than would ordinarily be required.

A series of long rafters form the roof and the two workshop spans. To allow these sections to be easily transported to site from EvadX’s fabrication shop in Rhyl, they were delivered in sections and then assembled into complete rafters before installation.

For the longer 33m-span, the rafters arrived in three sections, while the 28m span required two pieces. As well as steelwork, EvadX has also installed staircases, hand railing and maintenance walkways.

EvadX has also erected three separate single-storey ancillary buildings on site, these include an energy centre, compressor house and a bin storage structure.

As with most steel construction projects, the frame was one of the first elements of the scheme to get under way after the groundworks, on this greenfield site, had been completed.

However, on some projects the ground floor slab is sometimes installed first, giving the steel erection team a clean and flat surface to run their MEWPs on. The slab needed for this facility had to be cast in a dry and sheltered environment and so the steel frame and roof cladding had to be installed first to provide the necessary protection.

“Because of the excessive loadings that will be exerted by the work and equipment within the workshops, the concrete slab is 900mm-deep and had to be cast in two separate pours,” explains Mr Ford.

Summing up, the Welsh Government Economy Secretary Ken Sates says: “The fact that the AMRC will be managing Wales’ first Advanced Manufacturing Research Facility on Deeside really is cause for celebration.

“The AMRC has a 15-year record of delivery and has long demonstrated that it has leading industry capability in the delivery of research, manufacturing support and partnership services.

“It has built up incredibly strong relationships with a range of partnerships, from global corporates through to local SMEs and supply chains, and it will play a vital role in developing sustainable, long term leading innovation and skills.

“This can only be good news for the future of advanced manufacturing here in Wales and for the regional and wider Welsh economy.”